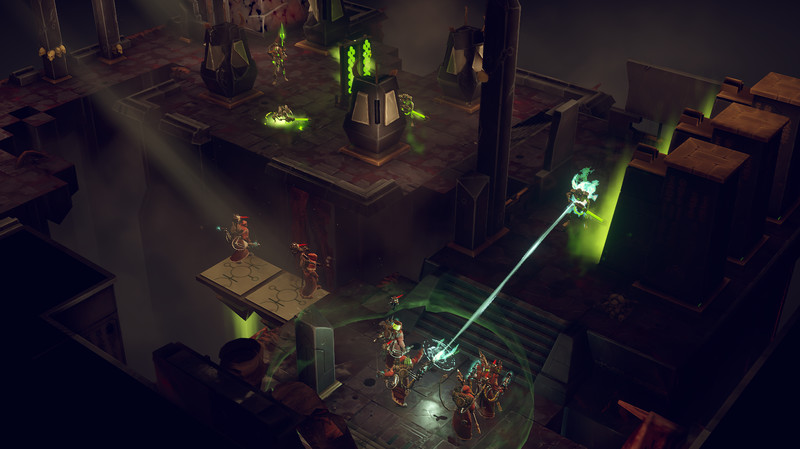 Take control of one of the most technologically advanced armies in the Imperium - The Adeptus Mechanicus. As Magos Dominus Faustinius, you’ll lead the expedition on the newly rediscovered Necron planet of Silva Tenebris. Customize your team, manage resources, discover long-forgotten tech, and control your Tech-Priests’ every move.

Your every decision will shape the missions ahead and ultimately decide the fate of the troops under your command in over 50 hand-crafted missions. Choose your path carefully - the Imperium depends on it.

Flesh is weak! Upgrade your Tech-Priests with weapons, support items, Servo-Skulls and other mechanical augments as you assemble your cohort. Customize your team’s disciplines, choosing from multiple character classes to create a squad for every playstyle.

Engage in immersively strategic combat that will test your mettle under the extreme pressure of the xenos ambush. Access your most powerful weapons and abilities by using Cognition Points and advance on your enemy without pause. Fear not, the Omnissiah favours the brave.

The Library of Immersion

A compelling story written by Black Library author, Ben Counter, specifically crafted to fit the unique personality of the Adeptus Mechanicus faction, with each character having their own personalities and agendas. Feel the tension and admire the devotion with unique visual effects and breathtaking audio.

Make tough decisions that will forge the future from your Ark Mechanicus, The Caestus Metalican, and send you towards alternate endings for a truly unique playthrough. Be warned, however, the more you explore each tomb, the greater the rewards but also greater the threat.

Canticles of the Omnissiah

Collect in-game achievements and be rewarded with strong abilities that can be used once per mission to aid you in the heat of battle.

and so much more 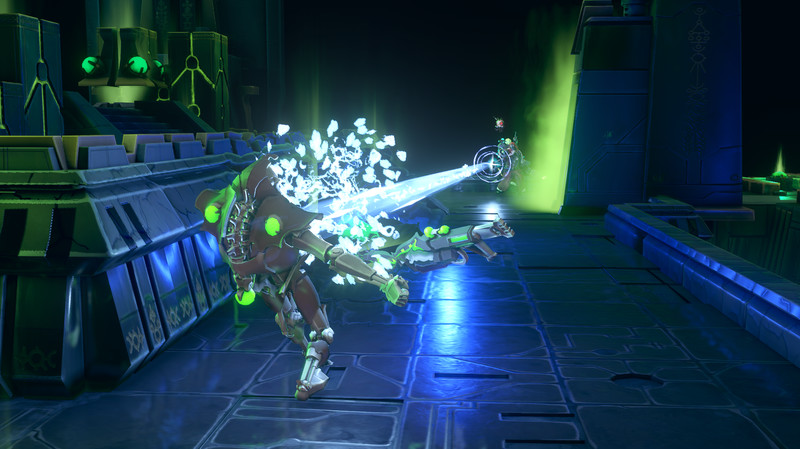 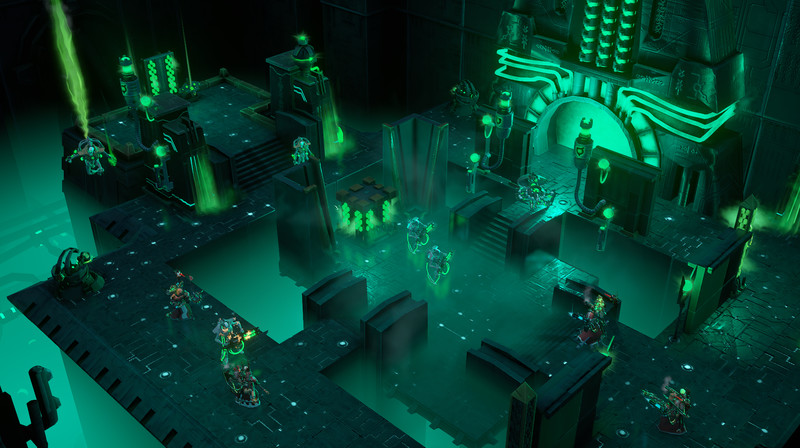 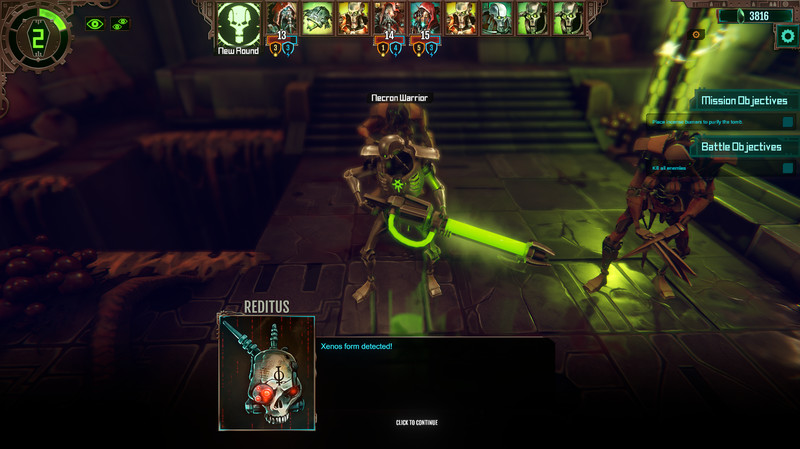 
Among the darker aspects of early Christianity was the notion that the human body is not only frail, but also tainted - irredeemably sinful. There were believers who felt tormented by that perceived taint and sought to absolve themselves by punishing their body in very drastic ways. In this game, you'll join a community which has taken that notion to the extreme: The Adeptus Mechanicus.

The Adeptus Mechanicus is a monastic order of priestly mechanics, engineers and warriors who worship a machine-god. They seek to cleanse their bodies and acquire machine-godliness by replacing ("augmenting") their limbs and organs with artificial ones, progressively leaving behind their individuality, their emotions, their humanity. Thus "augmented", they serve the god-emperor of mankind.

And so will you. As the commanding, er, cyborg-cleric? of an exploration\/combat mission, you lead a team of up to six "tech-priests" and their supporting "Skitarii" troops. Counseling you, and in fact giving you missions, are a range of officers and consultants with latinate titles such as "Subdomina" (the officer commanding the Skitarii) or "Xenobiologis" (something like a scientific advisor or intelligence officer). Between missions, there is extensive dialogue involving these people-machine-things and it is mainly these conversations which drive the story and provide lore to the player. The conversations are excellently written, a real joy to read, and an immensely immersive experience. Each officer has his\/her\/its own personality and agenda, and, in several cases, the loss of humanity after lots of "augmentation" is reflected in the characters' speech patterns. Each successful mission yields resources - freely distributable XP in practical terms - and new technology or other upgrades. Since time is limited, you cannot do all missions, thus it is up to you to select which mission rewards are more important to you.

After a mission, you can upgrade\/"augment"\/customize your tech-priests spending the hard-earned resources and equip the new technology. A good variety of upgrades is available to tailor each tech-priest to your preferred playstyle. And whether you invest all resources in one or two tech-priests or spread them equally among all six is entirely up to you. The developers apparently value player freedom, and I really like that.

This freedom is also felt in the game's difficulty settings: Mechanicus can be fine-tuned to your liking. There's a permadeath and an iron man mode, there is a doomsday clock mechanic that can be adjusted to your preferences (or disabled), and you can increase or decrease the amount of resources you gain during a mission. You can effectively create your very own difficulty. After a recent trend in many games with fixed permadeath, I am very glad to see a game offering such considerable customization options. I am not a fan of games which you have to play in the exact way the developer wants you to; this isn't one.

The artwork is fantastic and portrays impressively both the twisted and disfigured ("augmented") warrior-monks, as well as their opponents, the Necrons. These are a weird collective of undead robots (?) loosely based on pharaonic Egypt. You will search their underground tombs, and the Necrons have their own architecture, script and inscriptions\/reliefs\/paintings. The eerie music and the fantastic voice acting (incomprehensible babble mostly, but superbly done) support the depiction of an utterly alien world on your screen.

There is a lot to commend this game as a turn-based strategy game: Interesting mechanics, a strategic layer, tons of customization options and troops you grow attached to. There are some minor shortcomings though: There could definitely be more combat maps (at least in my ongoing first playthrough I have fought several maps repeatedly), and balancing is apparently not yet optimizedl: Several character upgrades seem to me less valid than others. However, on the whole, this game truly shines among its competitors. It is great fun to customize and upgrade your tech-priests, lead them into combat, and overcome the blasphemous foe with fire and faith.

What makes Mechanicus really, really stand out for me, however, is the immersion into a foreign world. It is a universe of high technology and medieval superstition, in which cyborg soldiers carrying energy weapons are accompanied into combat by a censer-robot spreading fumes of holy incense. Replacing a spare part on said robot requires a holy ceremony and chanting the litany of the machine-god. This weird mix is perhaps well known to anyone who has ever played a decent 40k game. But never before have I encountered anything like the Mechanicus monks - twisted on the outside by horrible "augmentations"; tormented within by a burning inhuman faith which forces them to reject their own body. How different they are from the cocky G.I.-Joe superhero Space Marines, how different from the conventionally brave Imperial Guard!

Mechanicus does an outstanding job at really hammering home how dark, frightening, superstitious and fundamentally anti-humanist the year 40.000 is. The monstrosities of the warp, the fearsome Orks or the mysterious Eldar have been portrayed well in other games. The real horror, however, comes not from alien monsters, but from within ourselves.

Far better than any other game I know, Mechanicus captures the essence of the WK40k universe. If you want to immerse yourself into that creepy, horrible and fascinating future, play this game.. The lore of the 40k universe is represented quite well through the handful of Magos advisors working for\/under you, and in what you discover in the Necron tombs found below the planet. If you follow each quest string to the end, you unlock various technologies of war, information, and support to your cause. Depending on how long you take, each mission adds "awake-ness" to the sleeping Necron armies on the planet. You must find as much technology and information as you can before the timer runs out.

As far as the actual mission turn-based combat goes, I wish they had a miss\/fumble system that added some level of risk to aggressive play -- because as it stands with the crit and opportunity strike mechanics, there's absolutely no reason to play any style but aggressive. It took a few restarts to understand the mechanics of the game, but once I did it was quite easy. I'd like to see a harder difficulty option or something. That said, it is still fun to explore the halls of the sleeping Necrons, and see what wonders your tech priests can find in the name of the cause.

Ultimately, I recommend this game as a fan of turn-based RTS and of the 40k Universe, and am looking forward to any future content!. I wasn't expecting this game to be this good that's why I am writing this review (I generally don't write reviews).But this game is quite hard (maybe I am dumb dunno).I thought to my self I could play it on normal difficulty , I died 4-5 times at the third mission then I lowered the difficulty to casual. Game is still hard in casual still punishes me if I make a mistake but not unfair like it was in normal I can'T even imagine the higher difficulties.This game is quite unique for me because I don't play strategy games like this but I can say it has similarities with 'Darkest Dungeon'.. not so much hard as just unfair. THE "GAME PLAY" VIDEO IS MISLEADING DO NOT PURCHASE!!!!!!!!!!
Okay, MOST of the Game play DOES NOT LOOK like the videos above, most of that is the COMBAT SCREEN which is a DIFFERENT screen that what you Normally see in Normal Game Play.
The screen that you MOSTLY interface with is the "map" screen with Directional click-to-go-to-this-room style type game play.
You see the enemies on the map before you even enter the room, same for objectives.
The way the video portray the game as a Dungeon Crawler, which it is NOT.
It is Turn based... literally and technically the game is turn based, once you encounter an enemy, then you see the above footage of the game.

This is VERY misleading and i'm asking for my money back....
Not saying the game play isn't fun, it Kind of is an interesting take; however, i feel like i was intentionally mislead and i don't believe in rewarding deception.. Quite a hoot - an enjoyable amount of progression of the roster (levels, equipment, abilities), with a solid atmosphere, sensible writing, and excellent music. The combat is acceptable -- while there's some strategy to be had with the cognition points mechanic, it would benefit for more varied terrain mechanics (e.g, the role of cover is extremely limited, could use greater verticality, or destroyable objects, etc) and more enemy types.. For someone who isn't expert abot this world and it's lore game is extremely boring. Not for casual tactial RPG fan game.. I have been holding off with this review as I was waiting for the patch that adds difficulty settings to the game. Now that its here and with countless custom settings no less I can easily recommend this game. Combining its own unique XCOMesque playstyle with classic RPG elements as well as solid writing and even likable characters I can safely say this is by far the most immersive and fun campaign I've ever played in the 40k universe surpassing games such as DOW\/DOW2, Space Marine, and even classics like Chaos Gate. Perhaps most suprising of all for me was the amount of humor and easter eggs present in the game which add a great deal to the already fun experience.

Speaking of Chaos Gate, Mechanicus has a stunningly thematic 40k soundtrack.. Fantastic game! A cross between the best elements of XCOM and Darkest Dungeon, and probably one of the best Warhammer 40k games ever made. Their portrayal of the Mechanicus is spot on, and they make a truly refreshing faction to play.