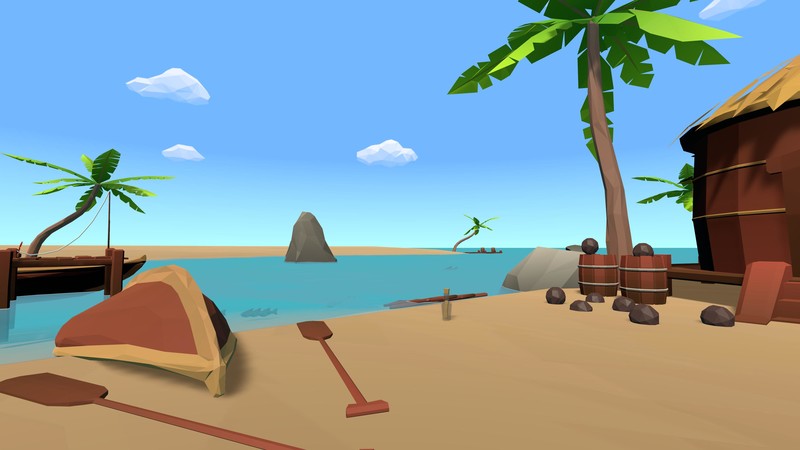 These Lands is a virtual reality puzzle adventure game that leaves you marooned on an island. Following the footsteps of a long lost explorer, you must solve the puzzles to unearth the mystery hidden within. Only the most skilled, logical and brave adventurers will survive These Lands...... will you? 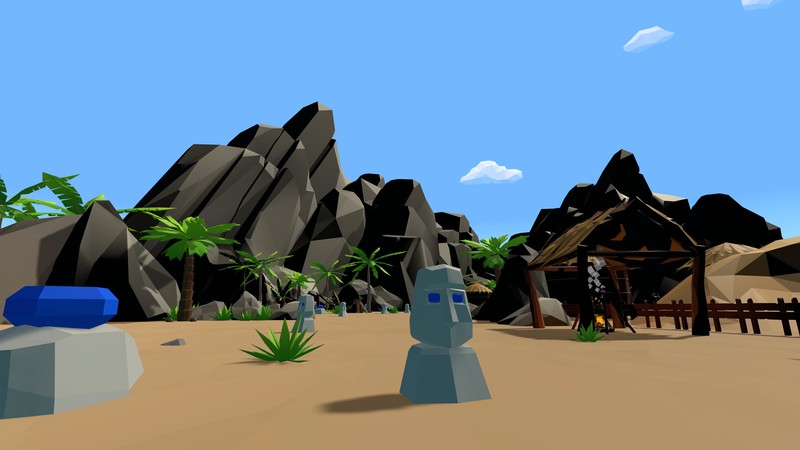 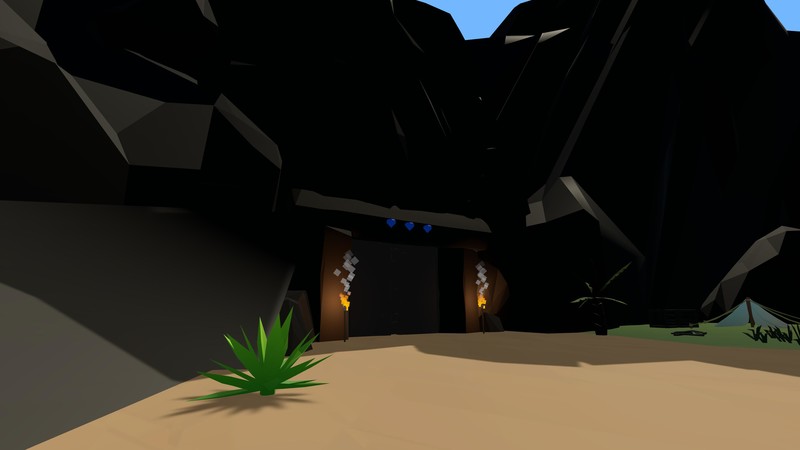 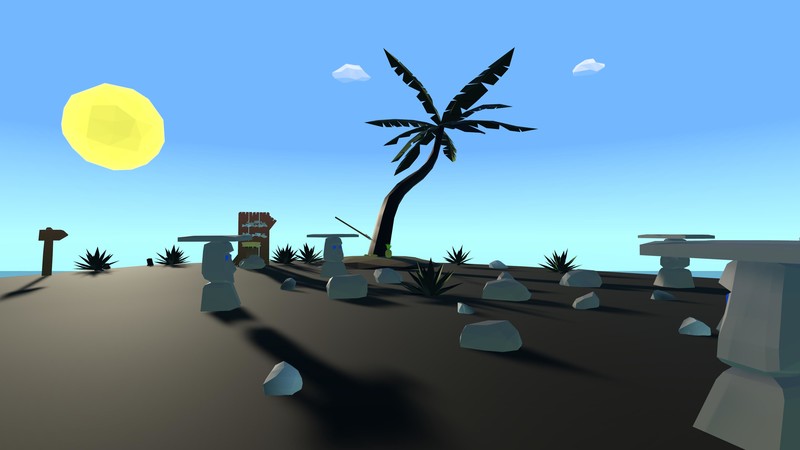 
Couple of bugs, but very immersive.

My favourite part was throwing fish on the floor! :P

Otherwise an awesome game!
. When I bought this game I was worried the price would be too steep, but after the first hour of playing I changed my mind. This games puzzles are fun and challenging, the storyline kept me hooked and I spent hours wandering around playing in the environment.

The artwork is beautiful and I didn't get motion sickness once. Would highly recommend.


February Update: What we've been working on!:
Dear players,

Hello again after a few months of “radio silence”. We hope your new year started on the right foot.

For us, we think it did - and we want to share a few things about what we’re working on at the moment. 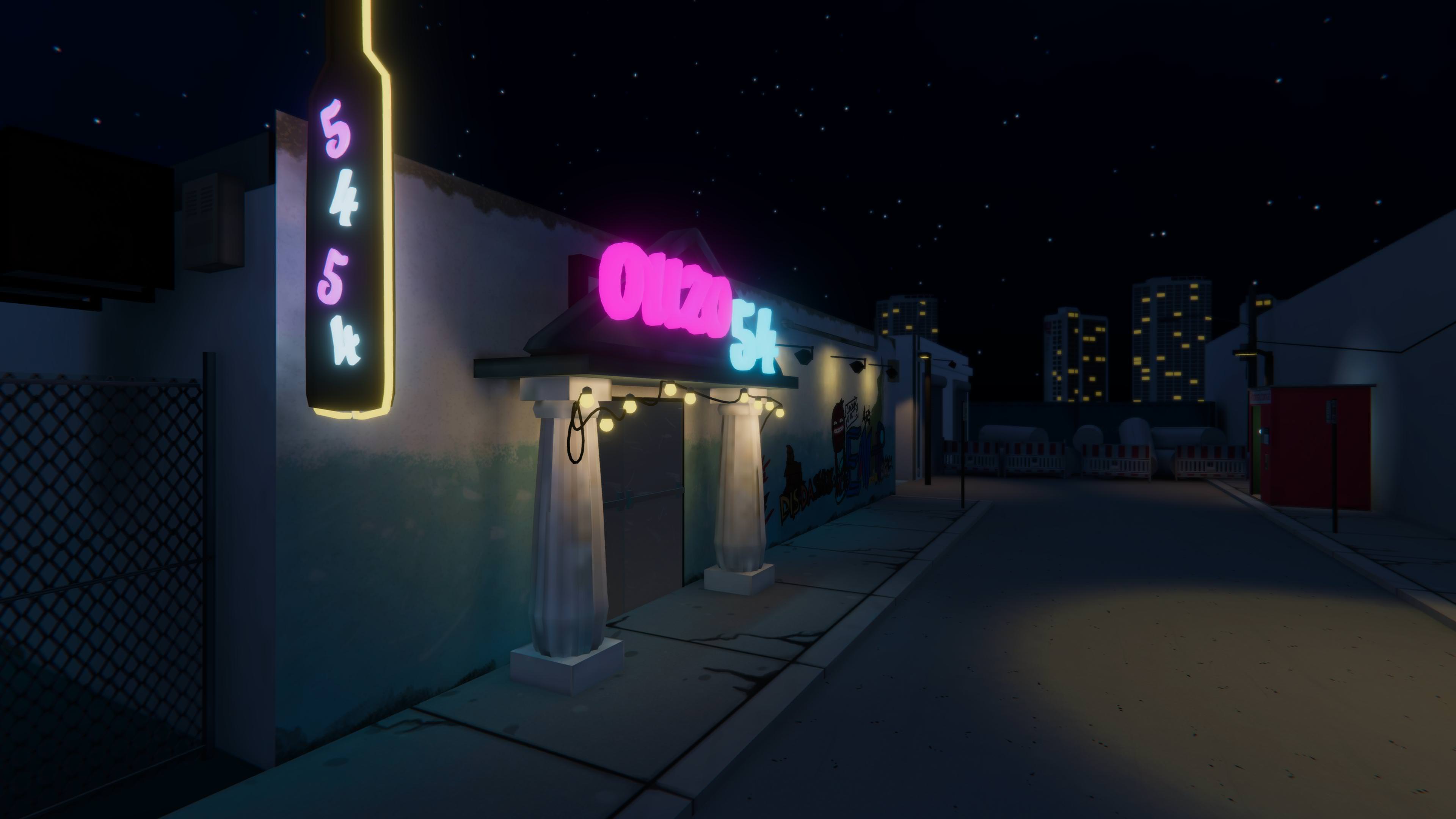 When we started building Disco Destruction, we were already programmers and gamers, but we sure didn’t feel comfortable calling ourselves Game Designers. That’s why we started building our first game right in front of you, through our free Early Access and our constant, iterative updates.

During these 7 months, we tested our ideas, got to know our players and learned some things about what makes a VR game fun.

So, we decided that the basic idea of Disco Destruction works. And now, it’s time to release what we've always had in mind.

That’s why, since the beginning of the year, we’ve been working full-time on the new version. The goal is to take what made Disco Destruction fun, and make it look better, have more duration and expand a little on the story ideas.

The work is going great and we believe that around late March we’re going to begin Beta testing it.

Around April, is also our target for the “Late Access” release: Still Early Access, but self-explainably later than the previous one. That version is going to be our full game and maybe the Early Access tag will remain to explain our plans for some more additions that we’re thinking about.

That version, also, is going to have a price - but we’ll talk about this soon.

Where we are now?

At the moment, we have done a lot of work to streamline the main gameplay to support a “nights progression”, where each night is going to vary in difficulty.

We are constantly working on making everything look better. The art style is new (forget the blocky aesthetic), the level is a whole piece of a Miami neighborhood (not just the club’s main area) and you’re going to be able to move around freely.

We know, you always wanted these (we also did), but things take time to make. :)

We’ve also reworked the behavior of the Customers to make them react to many more of your choices. They’re going to feel much more alive!

We have also changed the Disc Selection system. In the Early Access builds, the discs came in a random order after a specific waiting time. Forget that!

Now you’ll be able to select whichever disc you want and play it. You’re the DJ and it should be your choice. But, you’ll have to work hard, to make some money and buy better discs to better suit your customers' tastes and leave your mark in Miami’s nightlife.

And who’s gonna sell you those discs? We’ll talk about that in the next update.

Until then, take a look at some screenshots from our work in progress and don’t forget to watch our new trailer, that includes a teaser for the next, big version in the end. 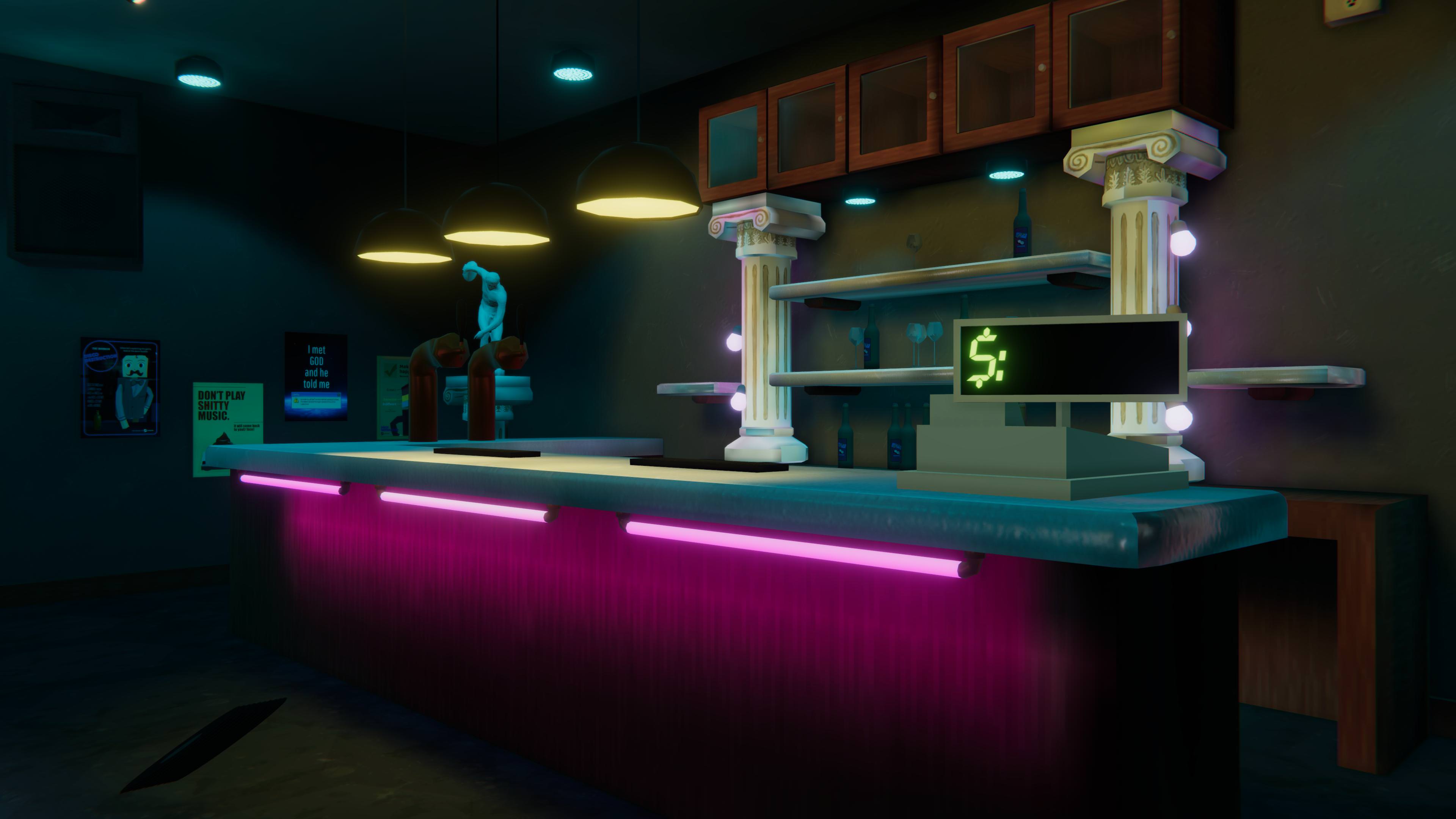 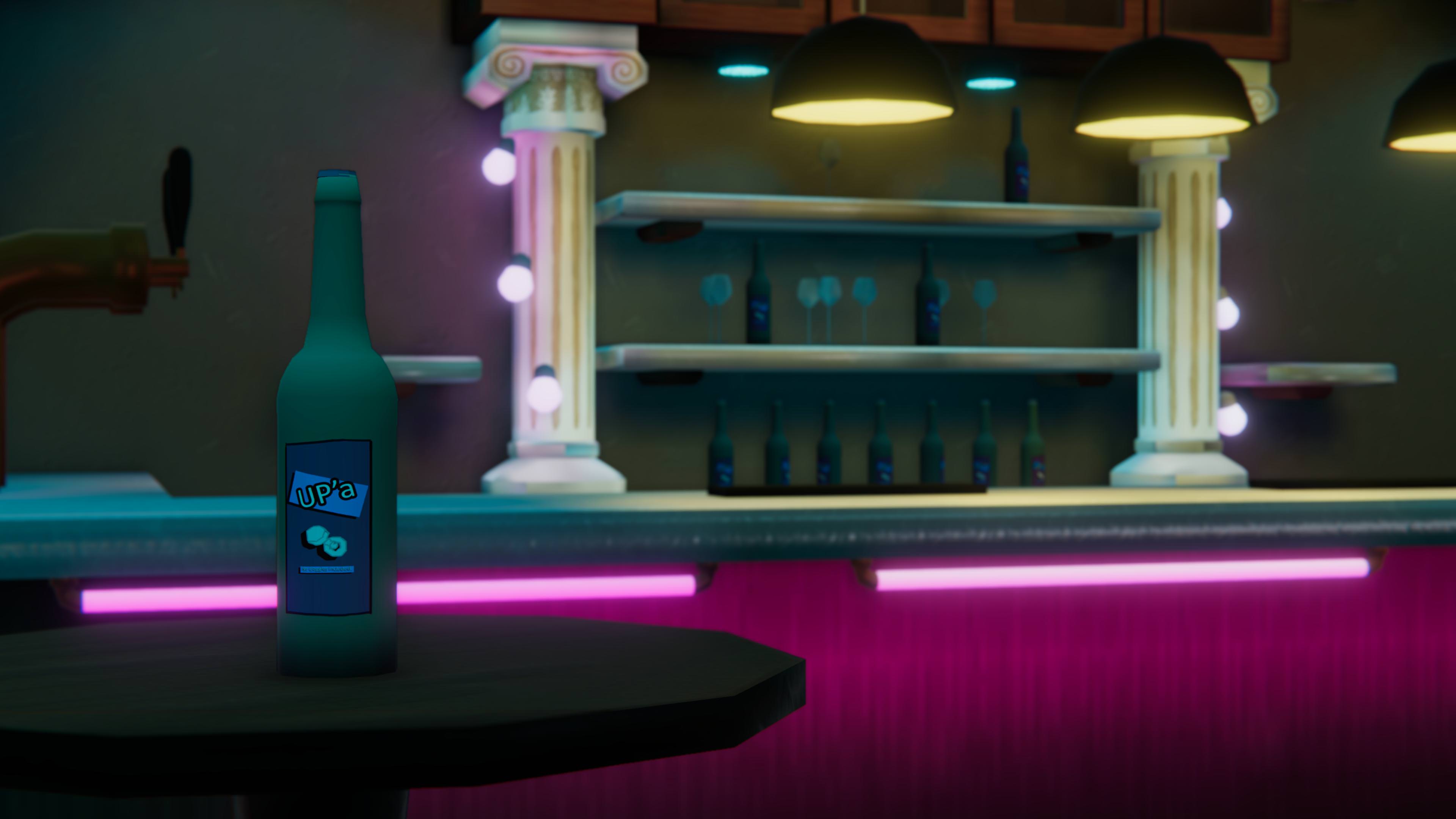 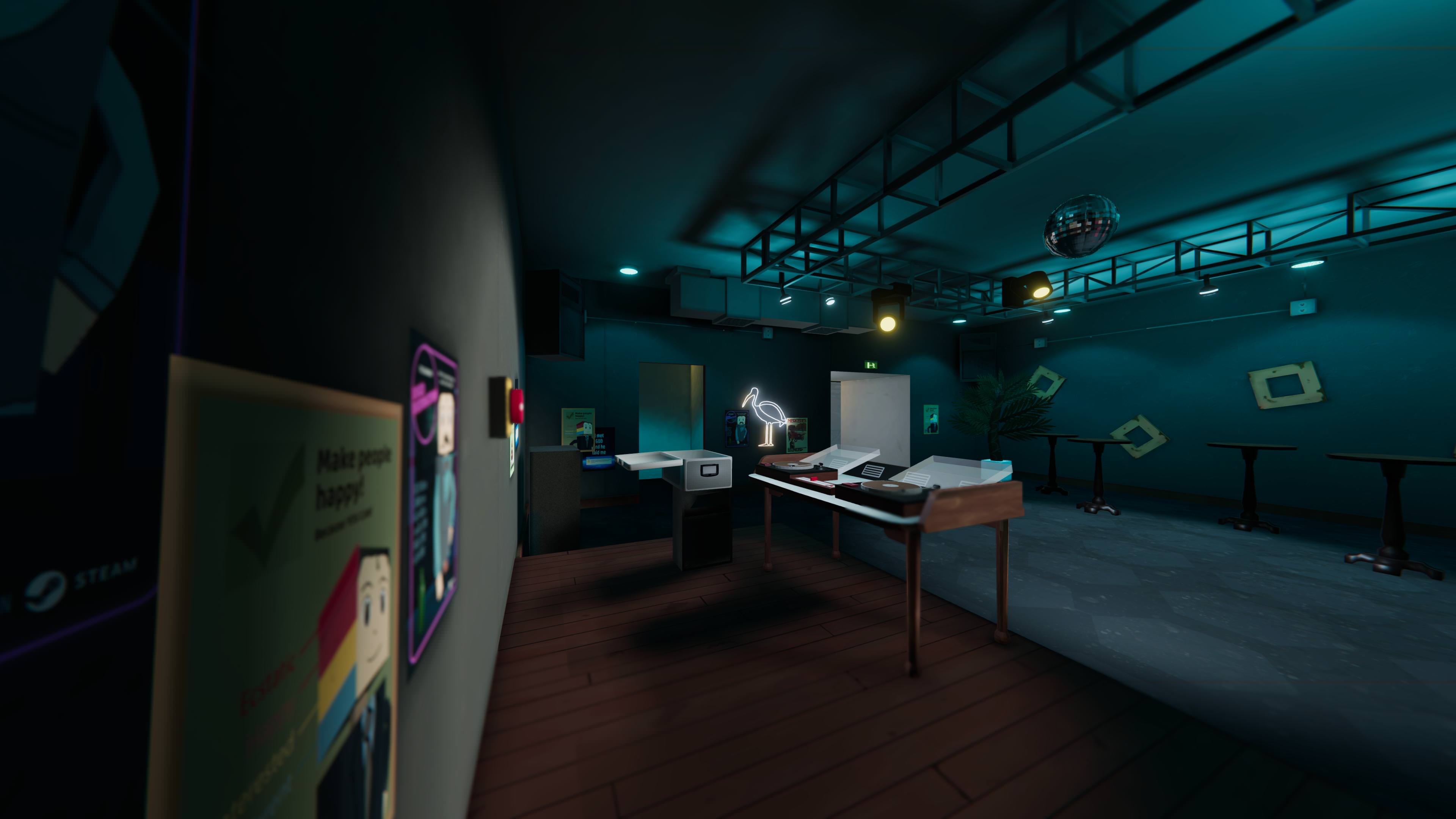 Again, thanks a lot for your support! We’re open to all comments and discussions in the forums. We’ll be waiting to hear your thoughts on everything.

There might be some months between our announcements, but we always try to have interesting updates for you.

This time it’s about a very big step forward: The start of our (initially internal) Beta Testing for the totally-upgraded Disco Destruction and the upcoming paid release.

Let’s take a look at them, one by one.

What is this new version about?. December's Small Update: Come back in!:
Dear players,

Hello again - this time too soon, as we promised.

We have a new iterative update for you, which we want you to try.

It takes all the features that we implemented in the last two updates and polishes some rough edges around them.

In a few words:


We hope you enjoy the small changes and we are waiting for your valuable feedback in our Steam Community forums.

Just one week after the first release of Disco Destruction, we have already gotten lots of interesting feedback. Today, we have our first update ready, that, among small bug fixes, adds a new and very fun element to the game: Vinyl Scratching!

So, update the game, put a disc on and start scratching! But don’t overdo it, or else the customers will get angry.

Please note that this is the first implementation of the scratching feature and we would also like your feedback on how it feels, or what would make it even better.

For a full list of the main changes in this update:

Please enjoy our game, and remember: the discussions on our Steam Community Page are always open for you to post your experience and feedback.

We'll be back soon, with more news - and of course many more updates to Disco Destruction!

It’s been some months since we last talked, but we’ve been hard at work.

First of all, we want to thank you for your feedback on the first release of Disco Destruction. Even as an alpha version, many of you had lots of fun with it. And now, we have a much better understanding of where we want to take it.

This Update.. The December Update is here - with a new level!:

One month after the release of our “Late Access”, we’re back with our first update.

We talked with a lot of you (some had spent many hours on the old Early Access) and asked you for specific feedback for the new version.

And according to all of that, in this update, you will find many important improvements (with even more coming later) - but let’s list the biggest ones:

We hope you have fun with the update - that’s what we'd like the most. Also, check out a video, showing-off these features:
https://youtu.be/HBND3W6gFzQ
And we’re already working on the next one, which will include the overall most requested feature: The ability to add your own music, along with a Free Play mode.

We’re very excited for this - and we’ll be waiting to see your playthroughs, when the time comes.

Again, if you want to talk to us, to give us feedback or suggest something, we invite you to our Discord chat room: discord.gg/VkG9Xz2

Until the next update, have fun and enjoy the holidays
The Subjective Team.