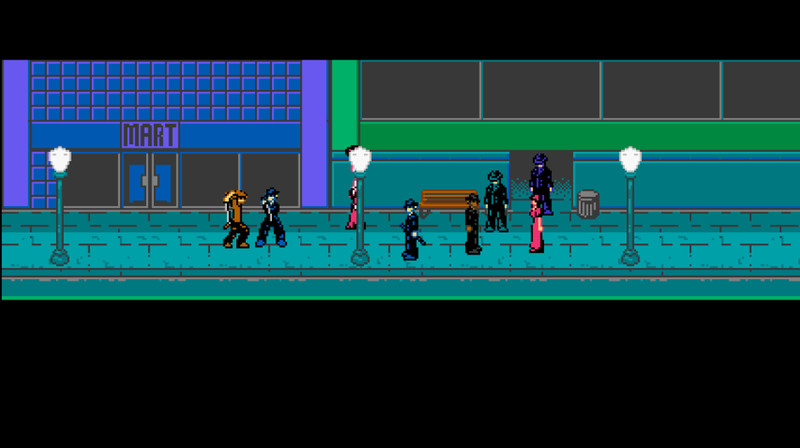 An action/adventure game taking ques from both film-noir and samurai-drama's of old, "samurai_jazz" takes players on an adventure through an enigmatic city, engaging in sword-fights, encounters with mythological beings, and quirky dialog with the local inhabitants presented with a pseudo 8-bit style. While action remains the central focus, a bit of detective work and puzzle-solving will become necessary while adventuring in this pixelated nightmare. 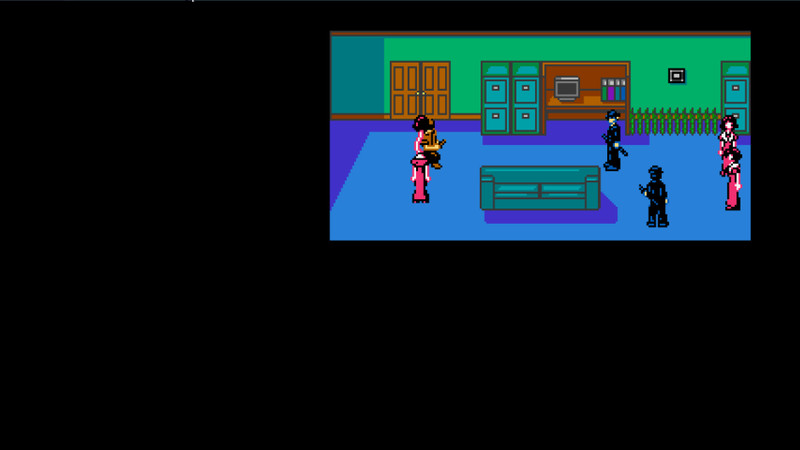 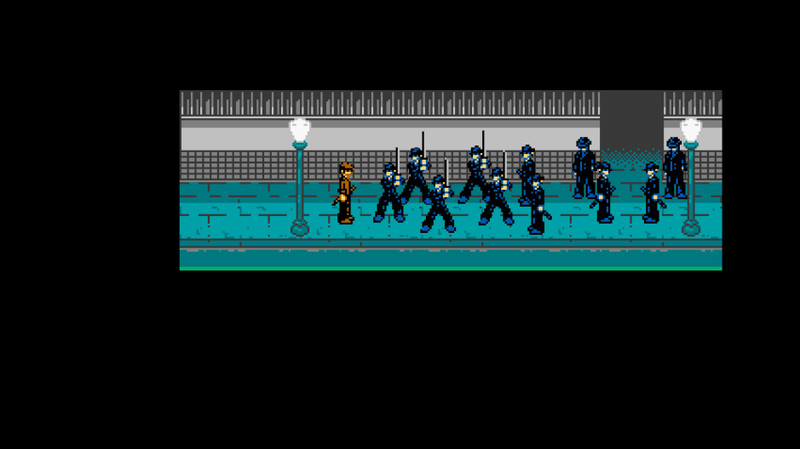 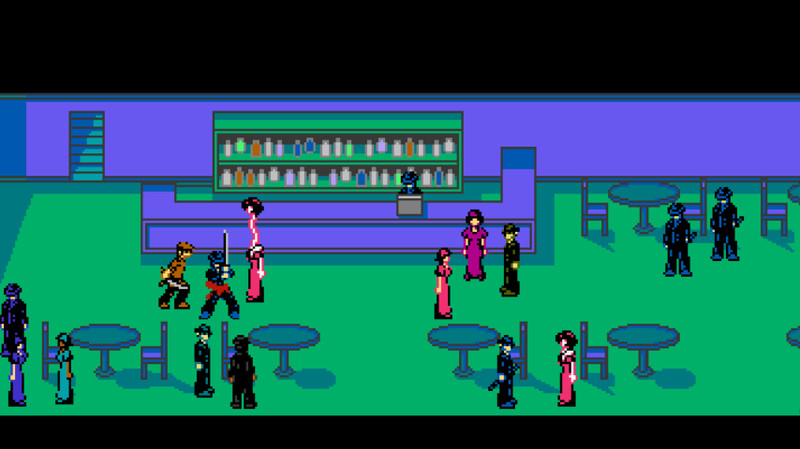 very nice game and i like that old school 2ded graphics i love it!. This game was great. It took me 1 hour to finish it the first time through, and then 30 mins the 2nd time and about 40 the 3rd. I finished it 3 times because there are achievements for all difficulty modes. Really fun to speedrun too. Great game with solid mechanics and controls, and I like the 2.5D style. Too bad the sequel sucks.. Purchased for 60 cents, samurai_jazz proves itself not unworthy of the price: interesting combat considerations and a pleasant visual style make for a good early impression and present plenty of potential for a fun beat-em-up, but weak puzzles and underdeveloped enemies mean things soon turn tired and tedious after the halfway point.
Not an unpleasant experience, in fact, one I'd rather enjoy seeing further fleshed out, but in its current, far-from-perfect form and approximately hour playlength, I'd be hard pressed to recommend it over a 100-in-1 cartridge of NES classics.


NES-era games traditionally boil down to using simple controls to navigate increasingly difficult enemy encounters spread out across fairly memorable, or at least aesthetically varied, levels, often climaxing with some sorta pattern-based boss battle. Megaman, Double Dragon, Guevera, Contra, and Metroid all, for example, roughly follow this formula. samurai_jazz, meanwhile, misses the point somewhat.
Its controls are comfortably simple: move, attack, interact, and stance. Stance locks the player to a direction and slows movement, but allows for autoblocking and dashing; attacking and interacting work as you'd expect. Enemy behavior, unfortunately, fails to fully utilize this moveset, its complexity slowly growing before quickly tapering off, surmounting to a nice combination of projectile and lanky enemies that force a satisfying string of attack, dash, attack, etc. Sadly, challenging enemy combinations like this are introduced rather late into the game, and similar concepts aren't explored beyond that example. Compare this to say, Contra or Megaman, where enemies are introduced in a screen or two, then quickly doubled\/tripled up on and later combined with previous enemies, filling their respective weaknesses and instilling certain, potentially exploitable behavior\/expectations in the player. samurai_jazz' difficulty curve seems to derive mostly from sheer enemy numbers and the navigational challenges inherent to such encounters, not necessarily a terrible approach to progression, but one that is much better served in conjunction with combined enemy types. I would much rather have seen variances in enemy speed, movement patterns, attack properties, etc working with other variances of enemy speed, moevement patters, etc. This could have been used to, not only improve the satisfaction of the numerous enemy encounters, but also build up to interesting boss fights, as opposed to the impressively bland, conclusionary fight.

While old-school classics such as Prince of Persia and Another World were able to get away with trial-and-error, spike abundant puzzles, due in part to their slower pace and general age, samurai_jazz is a modern, albeit retro-styled, game, and therefore its gameplay loop should reflect the nearly thirty years since those titles released. Brute forcing puzzles through repeated deaths should be a last resort, not the modus operandi, especially in an action-oriented brawler. Roughly halfway thru samurai_jazz, what were previously quirky fetch quests to stimulate more combat, a pleasantry in beat-em-ups, quickly turn into a respawn heavy hunt for patterns, and that's about as far from the previously entertaining combat and charming dialogue as one could get. Puzzles should either be intuitively obvious to frame further action or evironmentally subtle, requiring critical thinking and cleverness: dialogue cues, past observations, referenceable knowledge, etc.
Repeated room exploration bringing up to the minor annoyance of room transitioning not requiring a press of the interact button, so one can very easily dodge out of the current room by accident, resetting the enemies and generally proving little more than a troublesome occurance.

All in all, samurai_jazz isn't a bad game: it looks and sounds nice, and combat is fun, plus with its dollar price tag, its less than perfect execution clearly isn't that big of deal comparatively, but given how little it currently brings to the table compared to similar classics, the majority of which are availible for a comparable price, its recommendation is hard to swing. You just don't gain that much from playing it.. Very Hard But Addictave for a indie title i had never heard of

Fun And Hard 7\/10. This is an indie gem, Im glad I found it. I would give it a 9\/10. Im a big indie fan, this is a steal at .99 cents. This looks like an easy game before playing it, but its definately not, you have to be strategic\/methodical when you try to get through parts of this game. Its challenging, or at least on the medium diffuculty level, I haven't even played it on hard yet. The retro feel of this game will make it a classic in the steam library. For .99 cents its great!. Hard as balls, but I like it.

Also, though the game won't tell you so, there is controller support. :-). +Good music
+Fun gameplay
+Cool concept
+Feels like it'd actually be on an older system
+Simple controls
~A little pretentious dialog, but can be fun at times
~It can make you want to ragequit sometimes with the timing puzzles
-Can get a little stale
-Quite short

Overall, this game is like an 8.5 out of ten. It's real cheap, so if you don't like it: not too much of a loss.. This game has some skill, craft and polish, but ultimately I didn't enjoy it.

First, "samurai jazz" is a great title, in fact it's a great idea for a setting. But the setting doesn't actually figure into the game, other than...the clothing? When you start a new game, there are a couple of sentences of vague story that I can't even remember. Then you leave the starting room, and each room after that has half a dozen blade-wielding thugs or rokurokubi that attack you. Why do they attack? Who knows! How does the protagonist get away with slicing down dozens of people in broad daylight? Is the city (whatever city this is) that<\/i> far gone?

The real problem, though, is the gameplay. You go into a room and try to cut down all the enemies before they cut YOU down. This requires finicky timing and control. When you die (not if, when) you start over from the beginning of the room. This is a good thing, as it means you lose very little time in your attempts to clear the room. It only takes a couple minutes to die 50 times in the same room. Of course, that really just means you rage quit sooner.

I wanted to like this game, but...it's just not fun<\/i>.
. I had a lot of issues with this game. It came cheap, so that much is a plus. But I often found myself dying when I shouldn't have simply because the game didn't respond to my desired actions (such as not turning left when I wished to do so). While the fast pace of the game was nice, it felt very similar screen to screen. At times you had little time to even react before getting attacked. Leading to a "die 10 times to get the timing just right" type of gameplay. There was also the fact that there seems to be an odd bug in the game. Where when you enter a new zone at times the enemies will "slide" to just outside of the map or to a section of the map they shouldn't be able to get to. Which makes dealing with them that much more difficult.

Personally, there is stuff I like about the game but it's mostly negative for me. I wanted to like this game, it seemed like everything I would enjoy. But after about 1\/2 an hour I just had enough of replaying parts over and over again because of silly issues causing my deaths. Most of what I mention can be seen in the video I posted a little while back.