The Justice League: Gods And Monsters 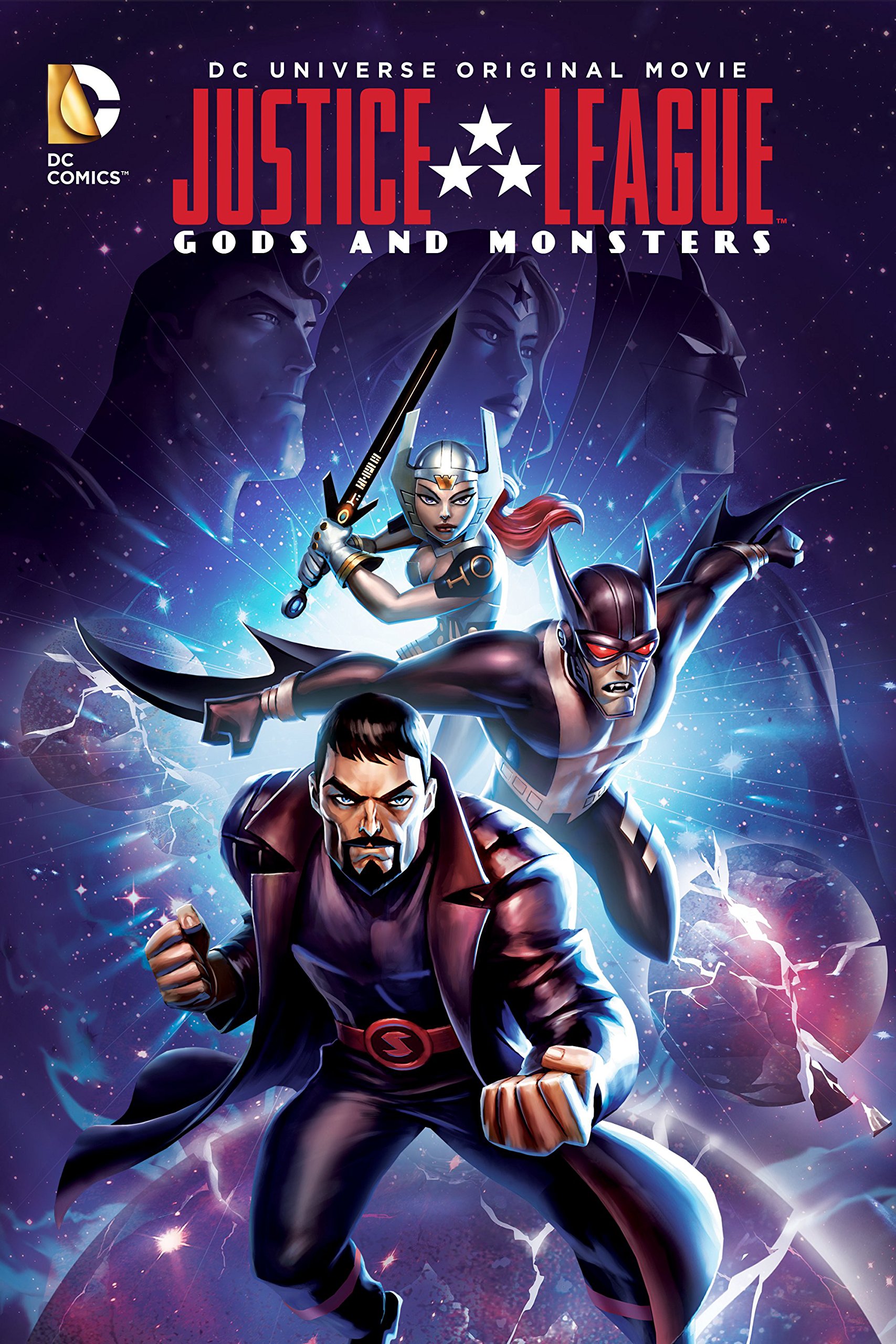 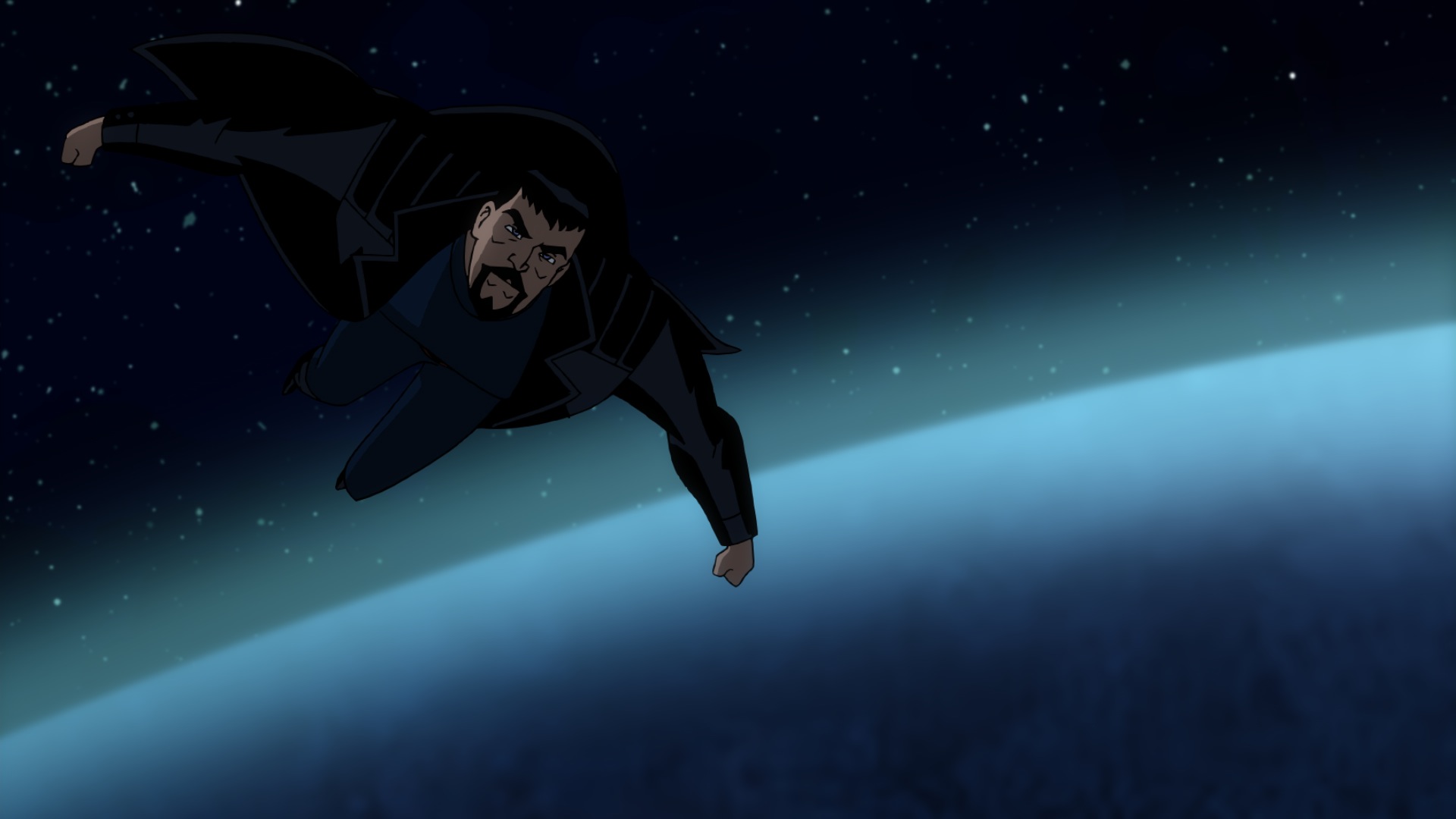 In an alternate universe, Superman is the son of Zod and was raised by a caring couple of Mexican immigrants living in harsh conditions, Batman is a young vampiric doctor, Kirk Langstrom, obsessed with an everlasting search for a cure for his disease and Wonder Woman is Bekka, the widowed queen of the world of Darkside. The three antiheroes unite and create the Justice League, despite wheelchair-bound Lex Luthor and others' protests. They operate often outside of the law and often kill the villains, but the US government tolerates them and works with them to an extent, since the three are willing to cooperate with the authorities and they never kill civilians. However, the all out paranoia and protests against their methods and untouchable position are growing. Things take a turn for the worse, when they are framed for a series of murders of famous scientists, who work for the government, and President Amanda Waller orders their arrest. They decide to violently resist arrest at all cost, until they can find the real culprits themselves.
In an alternate universe, very different versions of DC's Trinity (Superman, Batman and Wonder Woman), who operate outside of the law, are framed for murders of prominent scientist and the government decides to take them out.
Anyone watching the Justice League animated movies in order: The New Frontier, Crisis On Two Earths, Doom, Flashpoint, and War, will notice that they have become darker and more nihilistic one after another. Now we arrive at Gods and Monsters, the depressing continuation of this trend.

Of course, they are all "anti-heroes" now, to put it kindly, although a combination of violent vigilantes and fascist army is probably closer to the truth. Batman's a vampire (how imaginative! A vampire bat!), and embarrassingly Superman (sporting a goatee which I guess is meant to make him look badass?) is a Mexican illegal immigrant, a move obviously intended to make a politically correct point, although not really exploited here. Truth Justice and the Mexican way ! Yay! Oh and his real father is the murderous General Zod.

Poor old Jack Kirby must be rolling over in his grave to see his creations being so abused. He understood the difference between good and evil, light and dark, something that modern writers (themselves gone over to the dark side?) no longer see.

So by what perversion of the word 'Justice' can this trio of murderous misfits call themselves the 'Justice League'? I refuse to call these impostors by their assumed superhero names, since they are NOT the beloved characters they purport to be or anything close, so I dub them Sword Woman, Goatee Man and Vampire-Batman.

This morally inverted universe could be interesting if there was some realisation at some point by the characters that they were actually the bad guys and see them turn it around. Now That could have been thrilling. The problem is that we are supposed to be on their side from the start and see their personality flaws (ie that they are all bloodthirsty killers) as badass.

The film is basically a series of massacres, each more brutal than the last. Leaving aside the destruction of Krypton, massacre #1 is the "Justice League" wiping out a terrorist organisation. At least 50 people are horrifically killed by the JL, when they could just as easily have been captured by this super-powered trio. Some are hacked to death by Sword Woman, some crushed to death thanks to Goatee Man's heat vision (which he uses indiscriminately) and one has his blood sucked by Vampire-Batman. Nice. But that's OK its alright since they are "terrorists" and therefore deserve to be summarily executed by our heroes.

A token protest by ordinary people is then shown as well as a critical report by Lois Lane, but this legitimate concern is depicted as a bunch of small-mindedness.

Massacre #2 is of a group of scientists, some beloved characters in the comic world. Oh and a kid who just happens to be a young version of Cyborg. Again the film goes out of its way to make this as sadistic as possible.

Massacre #3 is the aforementioned backstory of Sword Woman.

Massacre #4 is a continuation of the massacre of scientists, this time inside Magnus's house. The violence is even more graphic with one poor victim being literally ripped in two. Note that our heroes were not able to save one person.

At this point I was pretty stunned but was still expecting some big turnaround to come. This, after all, has received some 5/5 reviews.

Massacre #5 is when Goatee Man and Sword Woman decide "heroically" not to give up but instead fight the army. To be fair, this sequence is less graphic than the earlier ones; we don't actually see any soldiers being killed when their tanks and helicopters are smashed by our heroes. Maybe these all were drones. But I guess showing soldiers dying would make the shallow ending less palatable.

Then comes an almost literal Deus-ex-machina. Lex Luthor (channeling his inner Stephen Hawking) appears out of thin air and explains to the JL what's happening and they go and fix the "villain".

Cue general rejoicing. Lois Lane recants her former opinions. The JL are now exonerated. So what if they have killed dozens of soldiers unnecessarily in addition to over 50 "terrorists" and failed to save a single scientist? They saved the world! Oh, from a threat powered by Goatee Man's rocket ship and protected by their "Justice" tower's force field. But nevermind, that's not anything to worry about.

Terrible. But the only question is, how on earth has this dreck gotten some many good reviews? I was hesitant about what Gods and Monsters would bring to the table. I was hoping it put DC animated movies back on track after some mediocre entries like Throne of Atlantis. And I'm delighted to announce that DC is back. Gods and Monsters is another great entry in DC's animated film catalog that can stand alongside some of the greats like Under the Red Hood or Flashpoint Paradox.

The story has an interesting premise. We see three of the founding members of the Justice League in this Elseworld story where the Justice League is more brutal and morally gray which makes the government feel threatened. Batman, Superman, and Wonder Woman are center stage and each have a newer origin story which help flesh out the characters more. The origin stories blend nicely with the rest of the story and add certain emotion when necessary. Lastly, as usual, there is a threat that affects the entire world except this time the threat is framing the Justice League and causing it to be feared even more by the government than they already are. Along the way, there are some nice twists and turns which help the viewer stay engaged.

The voice acting is top notch and was a nice and refreshing change from the usual Kevin Conroy and Tim Daly. As much as I love them, it was great to hear some new voices.

Overall, this Elseworld story is a fantastic addition to the DC Animated Universe and is a clever spin on what could be a normal Justice League movie. The darker and grittier tone allowed the film to fully develop this newer Justice League to their full potential and just made the film more intriguing in general. Definitely check this one out.

"Someone once asked if I wanted to save the world or rule it. Today it's going to be hard to tell the difference"