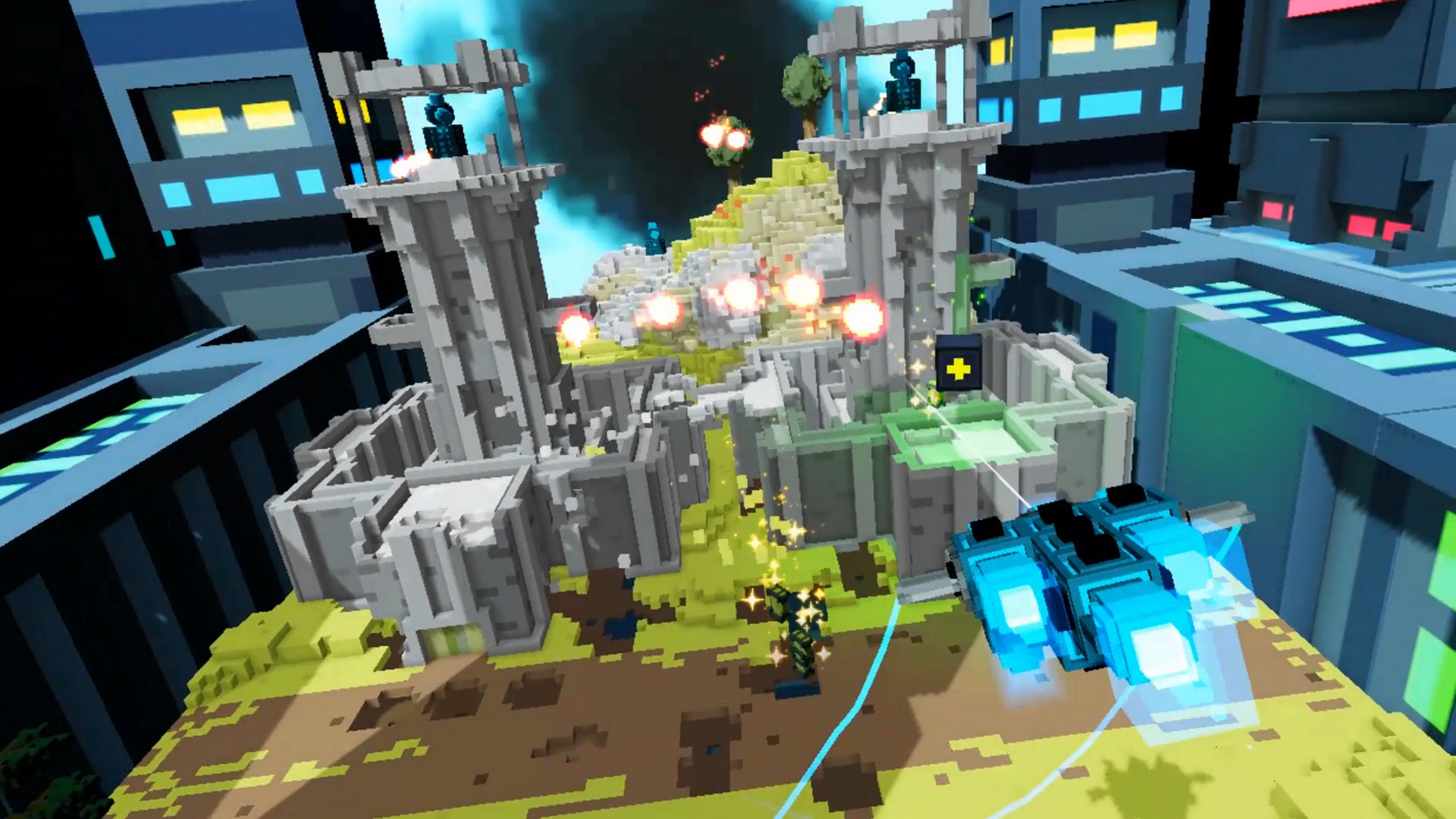 Xion revives the arcade and shoot ’em ups of the 1990’s in a refreshing and unique way with a fully destructible voxel landscape setting and your very own spaceship that you design and upgrade in an infinite number of ways.

* Blast your way and explore through multiple randomized levels, such as Cityscape, Red Valley, Island and Volcanoes, Outer Space and much more.
* Everything is destructible.
* Design and build your own ship.
* Defeat the big bad end-bosses of each level. Proving a challenge for even the most seasoned player.

“I think the golden age of gaming just got here :)”

“You nailed it when you overhauled the game a couple of releases ago. It's a joy to play, congrats on the full release.”

“To be honest this game took me by surprise, I just could not stop playing it.”

“The graphic style I must admit I love and the attention to detail is just amazing, one of the things I like the most apart from the game itself is building your own spacecraft it's really, really fun. This game is a must have.”

“A big thumbs up. Another one of those VR titles that reinvigorates the genre.”

“The potential here is huge, you play this game and literally dream of where this concept can go.“

“Simple, fun and exhilarating gameplay, build the best ship your credits can buy to beat the game at the hardest level!”

“What a Great game, i really love the the building system in this game that you can build your own ship and shot your way through levels of levels. Its really enjoyable to just destroy everything on the map “ 7ad7b8b382 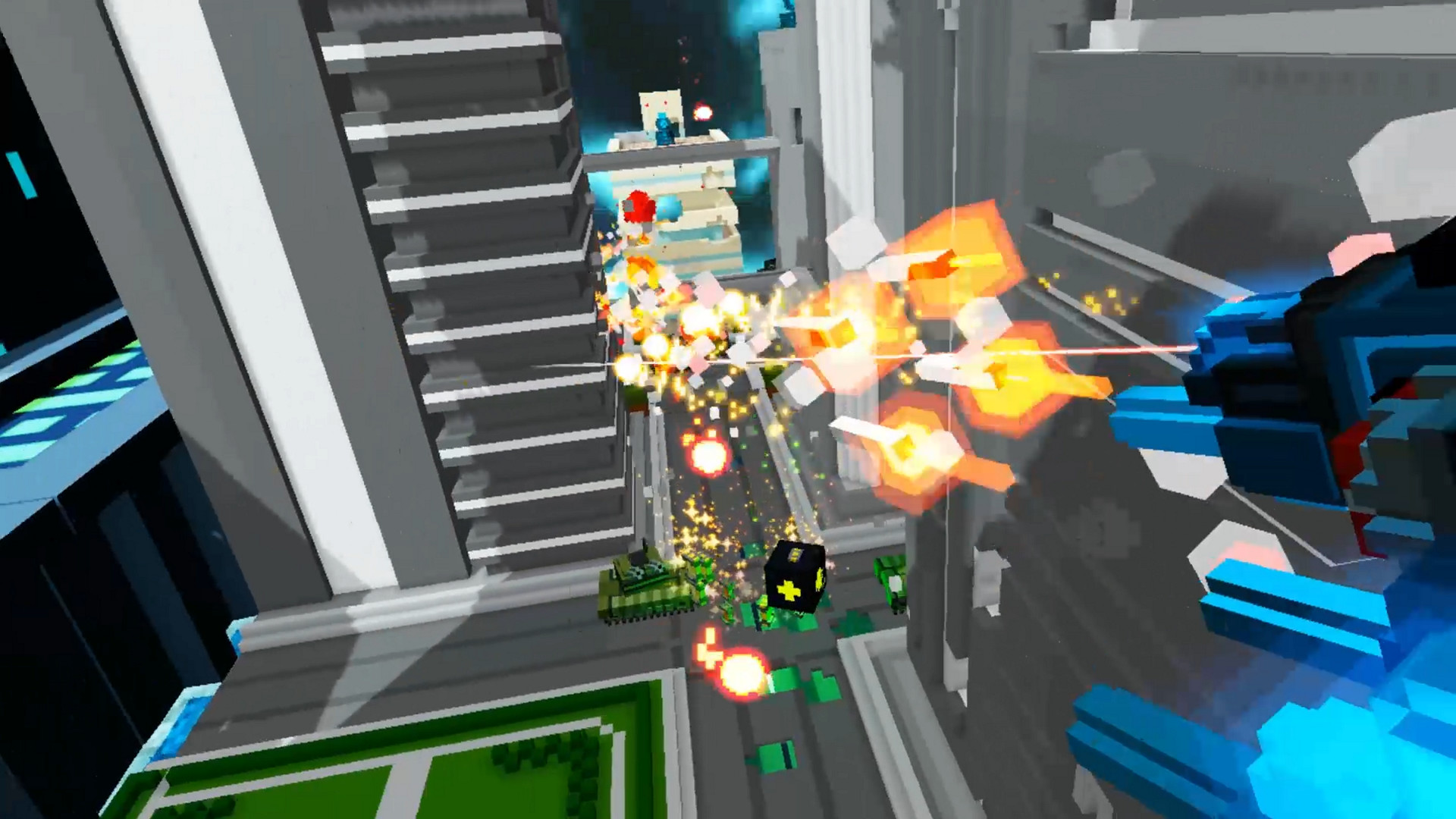 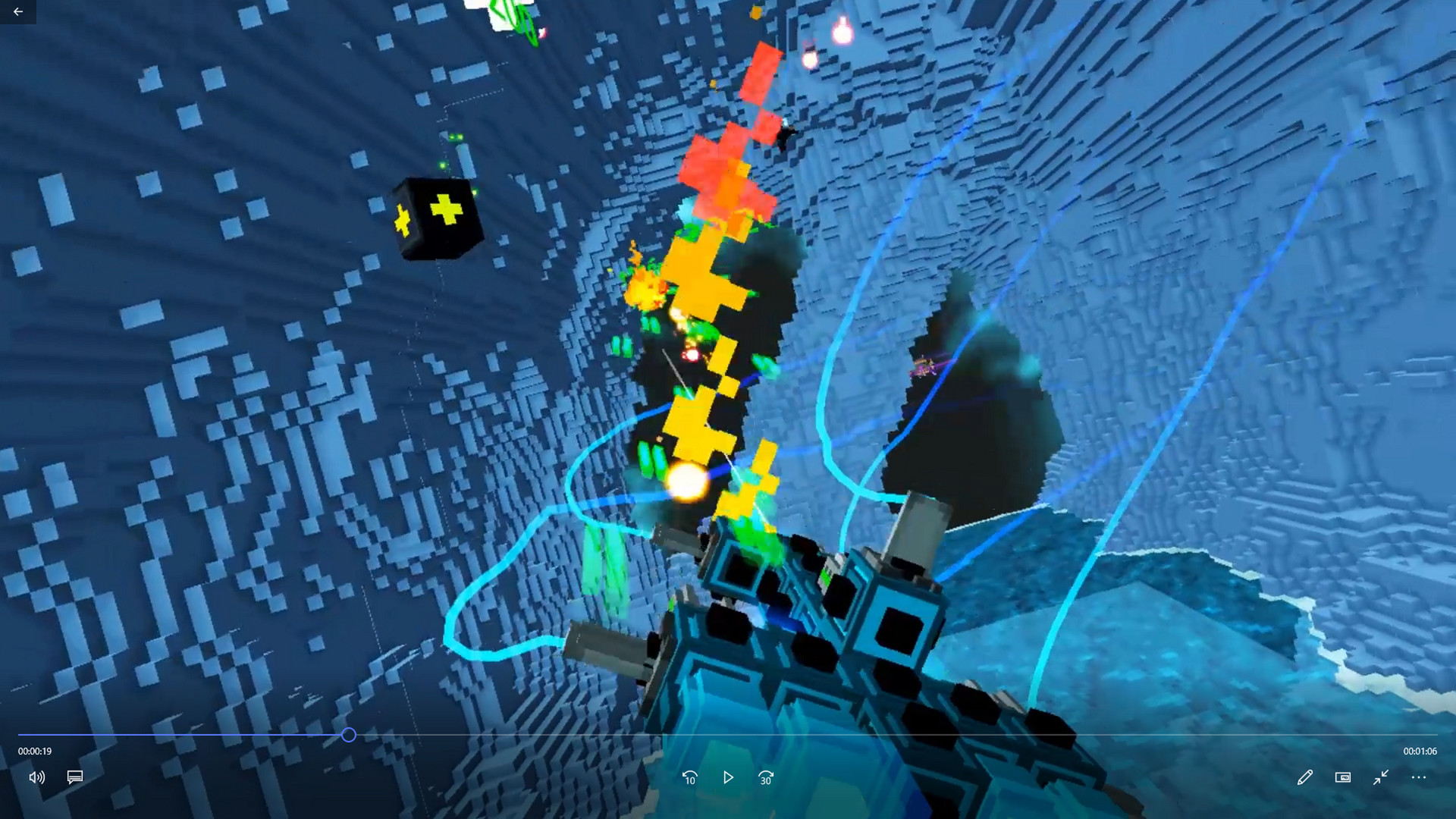 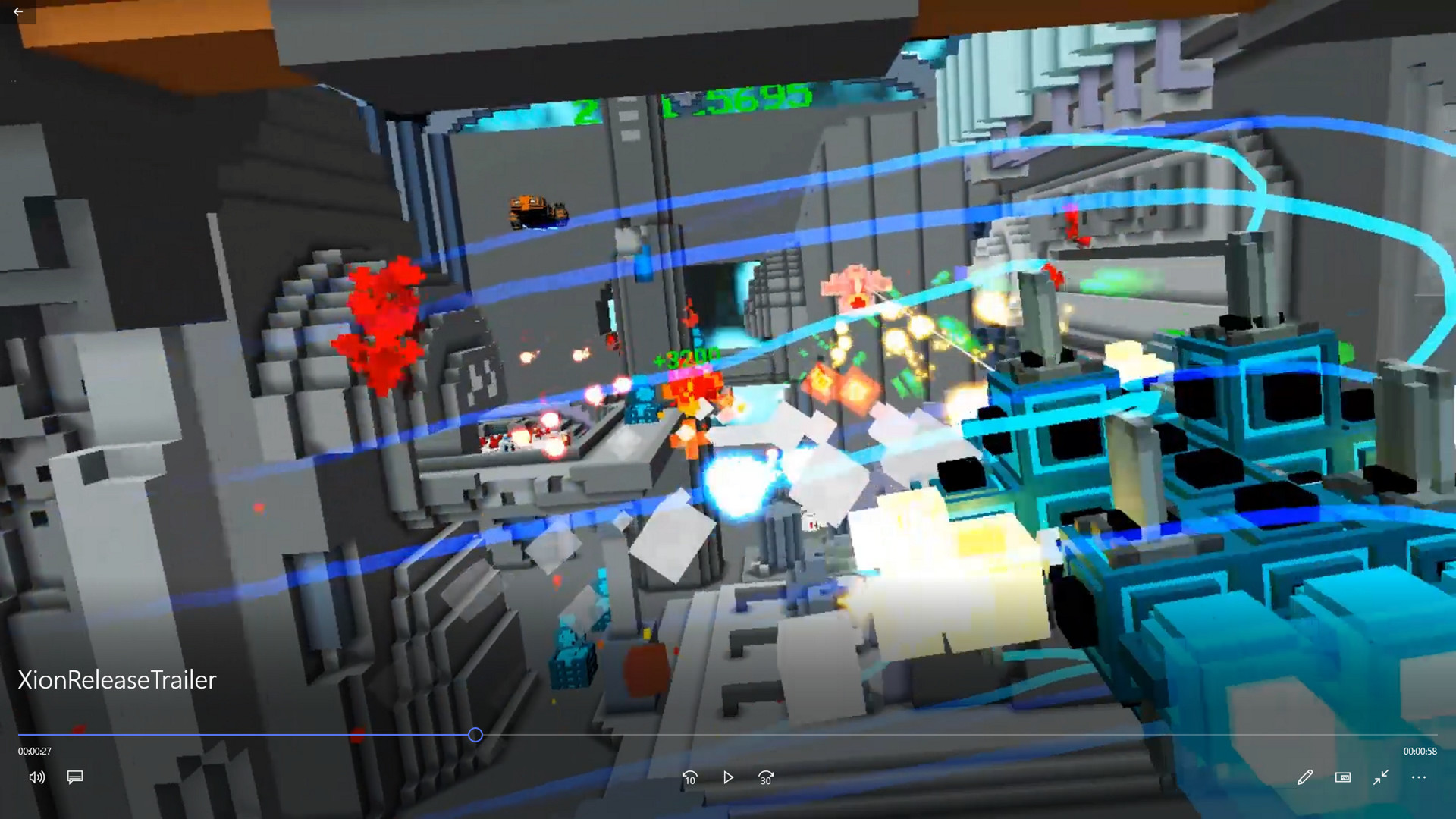 
This seems a good start for a VR "shmup" game! ( For example, Raiden or Aerofighters from the 90's )

I think the player needs more "credits" in game to start - 5000 would be enough?. Update 2 Sept 17:- much improved and getting better all the time, ship building and levels all getting better and more user friendly. Get it its different and new for VR!
Well got this game because there is nothing else like it in VR and on sale. Its early access and it showed straight away with the oculus touch controllers as I was about to get a refund as i could not start or build my ship until i realised i had to click down on the left stick to select things? Devs please look at this as it took me an age to work out.
After playing i reaaly enjoyed it and hope this gets developed further. Level 3 really needs a good room scale area, i have 2,m by 1.9 and it just about worked but took some of the fun out of the game as i could not see or crahed into the buildings with it being on the limit of my play area. Dev please look at level creation and not have to much where you need to be right on the edge of the play area.
Its different from any vr game out there, fun even with the limited levels but being able to improve your ship gives the game some re-playablity at this early access stage. Give it a go and get these developers working!
Update.. the developer has already fixed the play area and other issues... really fast response and game great to play!. One of my favorite games to play on my Gameboy was Gradius Galaxies... A classic shoot em up.

This is the closest game in VR to that experience. Arcade mode is intense, you only have one life to get through the 6 levels currently in the game. There are bosses on each of the levels at the end and you gain credits from killing enemies and some destructible stuff in the environment.

It's really amazing that you're basically on a level treadmill. It gives you the illusion that you really are flying through the level. Some of the tight spaces and caves in the game really feel awesome and you are really there in your voxel world. The ship building is still buggy, but from when I originally bought this it has been improved. I believe I'm still #1 on the leaderboards right now, and from someone who enjoyed Xortex.... I really think you would like this game if you liked Xortex.

The ship building is relatively basic, there are connection squares.... armor that gives you more health, weapons, wings (affects responsiveness of your ship), engines (affects the responsiveness of your ship\/movement), and power (powers your weapons). It's a little intimidating at first, but once you fiddle with different weapons and how your ship is built you can figure out what you like and what works for you.

The game will probably get you about an hour or two of playtime if you go through the free mode, which is easier and lets you save progress. However, it is a great hour or two. I really hope more levels get added since so far the content for me was well worth the price of admission!. (Beta 0.73)
Very fun shoot-em-up game with voxel graphics. I would describe it as R-Type (or 1941) with Minecraft-graphics.

I am a bit sensitive to VR locomotion nausea, but the slow and constant forward sliding motion lets me play for an hour without problems. Same principle as in the game "Hordez" from this developer.

One fun part ist also to upgrade the ship in between the levels with the ressources collected during the recently played level.
The currently existing levels have a quite differerent look and partly impressive end bosses, if you face them im VR. Game looks better ingame than on the videos.

Looking forward, how this one develops. Game has a really good potential and with the current discount it is a steal.

Few things to improve (no particular order):
- In the ship editor, it is too difficult to change the part "in hand". Once a part is selected, it cannot be changed by simply selecting another part. You have to use undo function to get the hand free again for another part. Annoying
- More levels (or better a level editor for community) would be great as long time support.
- Balancing. More smaller enemies which are easier to kill (cannon fodder).
- Change the sound of the power up drones to a friendly sound instead of the current alarm sound.
- Font in options menu is too small, hard to read.
- Intermediate bosses with stops not only at the end of the level

All in all, I would give 8\/10 points with tendency to improve, as the devs seem very active in development. Happy that I stumbled over this hidden gem.. What a Great game, i really love the the building system in this game that you can build your own ship and shot your way through levels of levels. Its really enjoyable to just destroy everything on the map and i cant wait for the updates to come for this game, i really think that this game has alot of potential just if it gets abit more time and there is no other game that i have find thats like this game on the Steam Market and for that cheap price and good content i can not recommend this game enogh.. Everyone who likes the good old shootemup`s, like R-Type, will probably like to fly around in such a game in VR. I do! And that is what you do in Xion.
The sound fits the action well. If you like the voxel graphics is a question of taste but when you are in action it works very well.
The devs are responsive and have promised to bring out regular updates. I really can recommend to buy that game. Now I have played it myself I even would buy it for the full price.

If you like shootemup`s buy Xion!. (Beta 0.51)
This game takes me back to Gummi Ship building in Kingdom Hearts 1. Mostly the same principle. Spend points to buy ship structure, engine, power generators and weapons. You gain credits toward re-building your ship at the end of every level based on how many points you scored. You have to scrap your ship at the end of every level, which sucks but the credits spent on it go back into your credit pool when you do. So you can keep building bigger and crazier ships as you progress. Your ship can take quite a few bullets (maybe based on difficulty) but colliding with the terrain will nearly kill you.

Ship building itself can be a bit buggy. Best tip I can give is to hold your controllers at right angles, perpendicular to attach parts correctly. There's only one level of "undo" in ship creation and sometimes undo-ing too much can mess up the attach point. At that point your best best is to scrap the whole thing and start over. A mild inconvenience.

Very much looking forward to future versions of this game!

Cons:
-Still kinda buggy
-Reconfigure ship at the end of every level
-One level of undo in ship creation. As a work-in-progress, this game is good and fun. When you finally build your ship and go to the mission, you will be amazed. But... the UX sucks!

Pros:
1. Deceptively fun when you get into the game
2. Some good fusion between retro and modern games

Cons:
1. Bad UX:
- There is no undo when you put a part on your ship. Accidentally put a wrong part and you have to start all over.
- There is no save feature for the ships. Make a new ship every time.
- Any parts that get destroyed in the missions will be deleted from the ship (but thankfully refunded). Make a new ship for every mission!
- Press "Start new game" accidentally, and lose all your hard-earned money
2. Lack of content. There are like 6 missions with unique bosses.

All in all, this is a good game but I cannot recommend it until it receives some polish.. The potential here is huge, you play this game and literally dream of where this concept can go. It's very early in it's development, and i like the other reviews eagerly the update. I had problems with enemies that get behind you, and taking damage, which i find hard to spot. I belive that can be resolved with some sort of danger pointer for enemies off you field of view, or a simple more visual indicator that isn't connected to the ship as it currrently is, as it's barely\/hardly noticable.

That personal gripe aside, a big thumbs up. Another one of those VR titles that reinvigorates the genre.