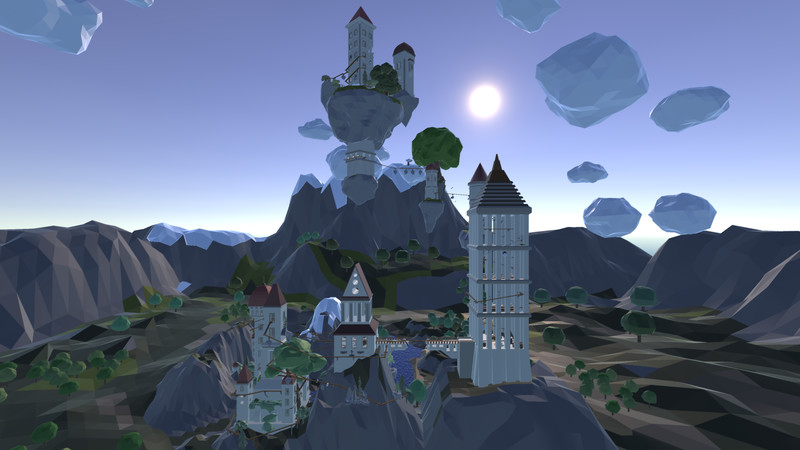 “...some of the most exciting VR gameplay I’ve seen of late…” UPLOAD VR

Make your way to the top of the tower, but don’t enjoy the view for too long: If a look down from the dizzying heights won’t make you fall to your death, the traps will. Get shot by spears or blown away by cannons. And who knows what will wait for you once you reach the top…

“…how Mario must have felt, when he jumped through the old 2D worlds…” Vrodo.de

It’s your time to jump and run through a world full of danger and excitement. Collect precious coins as you dodge cunning obstacles. Grab a sword, sharpen your axe and use them wisely, because you are in for one hell of a trip. Make it to the end to face the mightiest of all foes. d859598525 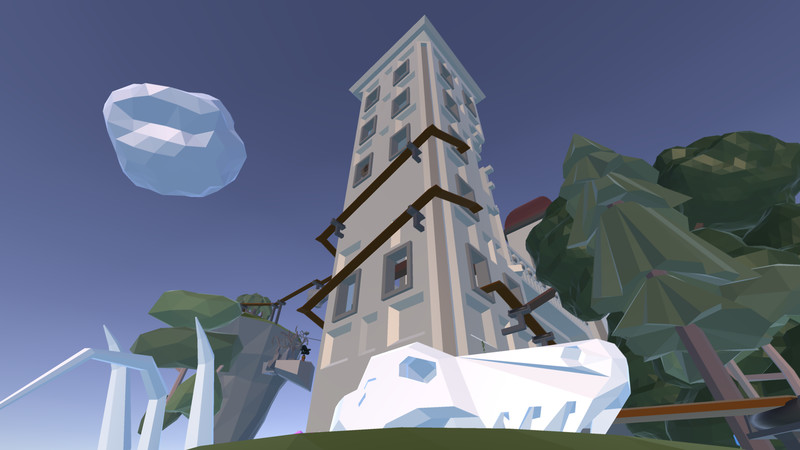 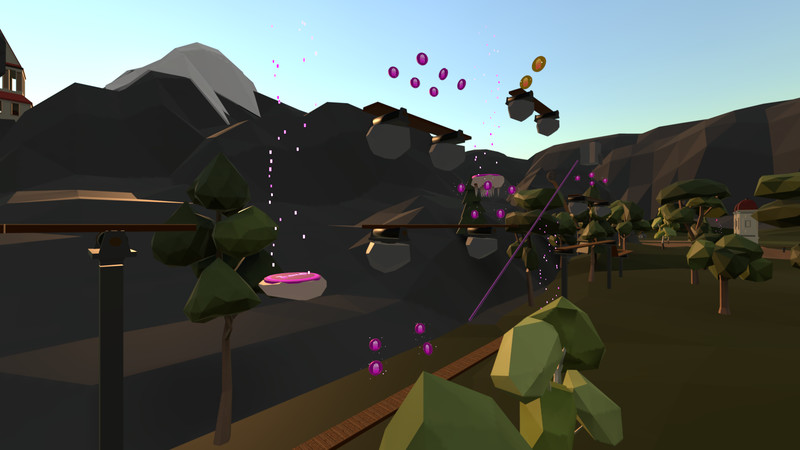 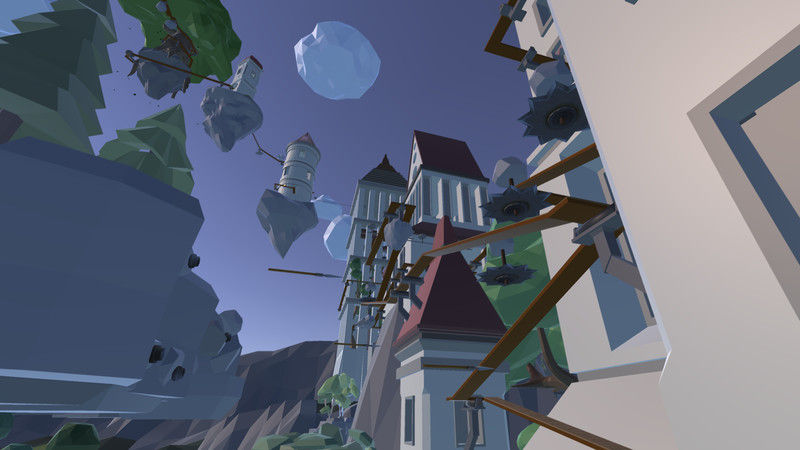 
This is the worst steam game I have bought to date.

It starts out and looks so fun, so good, almost reminding me of a Grimrock art style.

But then it happens, you walk into the pitch black corridor and you think to yourself "This is awesome" and then it hits you... Wait a second, I can't get anywhere but via a guess.

So you might say "That's what this game is, you have to listen via the sounds"

That's the main problem, For a game pretty much 90% dependent on sound, the sound isn't that good. I think of games like Thief: Deadly Shadows and know what surround sound should be like and how good it can be. This game utterly fails with sound, even though good headphones (I'm not talking Beats headphones, I said good headphones.)

At one point you get a flashback to your farm... My God... The farm... the amount of invisible barriers in this well lit, non threatening area is ludicrous. At one point I had to get a watering can from the shed, a shed with no door just begging to be entered. No can do, no way in heck you're getting in. Better idea go outside the shed, on the side of the shed where you see a watering can, get close to the wall and left click, left click like you never have before. Boom, I got it, now repeat with a shovel, an axe, and a hoe. And I can even describe the rage inducing harvest gathering, click on the poorly animated wheat until you get it. This game should be called "Rage Quit: Tales of the Anger Managment class."

At one point I see a enemy... If I had to sneak past or fight, I didn't care, I was just hoping for something fun. Instead you blow out a candle and a quick time event happens, which you don't get to see by the way. I have never seen a more lazy game then this.

On the short side of pros these are these:

Original idea for a game

The graphics in some areas look pretty good...


In short, this is a game both so full of promise, and yet so full of teribad... Yes I said it, teribad, no go out and buy a game that's fun and awesome and is actually worth cash.

. The game isn't finished. This will be an interesting game once the bugs are ironed out but right now, stay away. Its a waste of time and money.. This isn't a game, it's a poorly designed chore. An actual chore wouldn't have have you bumping into invisible walls the entire time. Don't pay for the privalge of doing a poorly designed chore, stay away from this game.. Great short experience, makes you sweat. Wish it was longer!. This has to be the worst fuc_ing game I have ever played.... REALLY!!! Plus I payed money supporting it... The damn delays having to read every detail... Sigh. I am already wasting too much time writing this. Enjoy...

But I warned you potential buyer.

I bought this after it "was released". It is nowhere near finished. This is a short (15min) alpha-quality demo level, which is terribly painful to "play" (its not play, this is the worst "gameplay" Ive ever seen). Basically the description of the game is a giant pack of lies. I wont dig into the details (Im sure others have), but suffice to say its false advertising at the very least.

Valve - you should give refunds for this, and delist this piece of sh*t.. Ooookay...I have no idea what "stage" this game is supposed to be in. There's was a post way back in JULY about a soon-to-be-released "2015 edition", but here we are in the New Year and this doesn't yet resemble a "finished" game in my humble opinion. Was this the "2015 edition" I just attempted, or are there improvements to come? No mention whatsoever on the Store page of it still being an Early Access title, so...anyway, let's attempt to review what I've played so far...

The Tower, from what I have thus far experienced\/endured, is an awfully good premise which has been executed...well, I'm obviously tempted to say "rather awfully", but it's not ALL bad. The idea of having to find one's way through some tunnels with MINIMAL lighting, and mostly sound to guide oneself by, is undeniably genius. The problem here is...there's nothing "minimal" about it. Much of the time, we're just talking a black screen with a tiny white cursor dot in the middle of it. So in other words, unless you're Mr Precision himself with the mouse, you honestly don't even know if you're staring straight at the ceiling or the floor half the time. And the sounds are...well, I'm not sure they helped ME that much, but I am admittedly the kind of person who needs his ears syringed of wax every so many years, so maybe I just need to visit a doctor sometime. Or maybe...just maybe...the devs thought of a brilliant way to create a sellable "product" with very little need for, y'know...those things that they call "graphics" (which aren't particularly awesome when you DO seem some daylight, I might add).

So does this mean that this is yet another "walking simulator"? Oooooh, GOD no. We have COMBAT, believe it or not...in<\/a> the form of pressing "quick-time" keys in aforementioned total blackness and hearing the guard we are allegedly attacking say things like: "Oy, would somebody 'elp me? Somebody's ATTACKIN' me 'ere...oy, 'e's just punched me in the FACE, so 'e as...is anyone goin' to 'elp me? Cor blimey!" or words to roughly that effect. Fortunately the voice acting is fairly reasonable, so one must be grateful for small blessings, and yet...

Honestly, it's hard to even review what it is we have here. Even if this qualifies as a "game" per se - and not a "con", as some other reviewers on the Store page have posited - it certainly doesn't appear to be a completed one, or even a semi-polished one. It's more like a demo with (questionable) promise. Henceforth I cannot, in all good conscience, give this anything resembling a recommendation, but who knows? Perhaps one day this game will be: a. complete, and b. rather good. Even on sale it's a pretty dubious proposition at this point in time...

Verdict: 4\/10 (for now, at least).. Okay, this game has AMAZING potential and it is quite nice. However it is in Early Access Alpha so there are a lot of problems with it. Minus the bugs and the glitches, I am having quite some fun with this game.

. Audio in the game is ABSOLUTELY BEAUTIFUL, the sounds of water trickling from the top of the cave or the sound of stabbing a guard in the head... Amazing.
. Lack of sight makes you traverse the pitch black caverns entirely by sound, which is very fun and interesting.
. Very intriguing storyline right off the bat, instantly had me drawn in.
. Voice acting is pretty good.

. A LOT of bugs and glitches. (As to be expected in a early access alpha.)
. While the voice acting is pretty good, there needs to be more emotion in the voices.
. Some of the script needs modifying, at times I just sat there thinking "That sounds quite odd."
. Worst bug I have encountered is MANY invisible barriers in the flashback of your farm, there are a lot of invisible barriers that restrict you from entering the tool shed and other areas of your farm. This makes it unplayable for me.