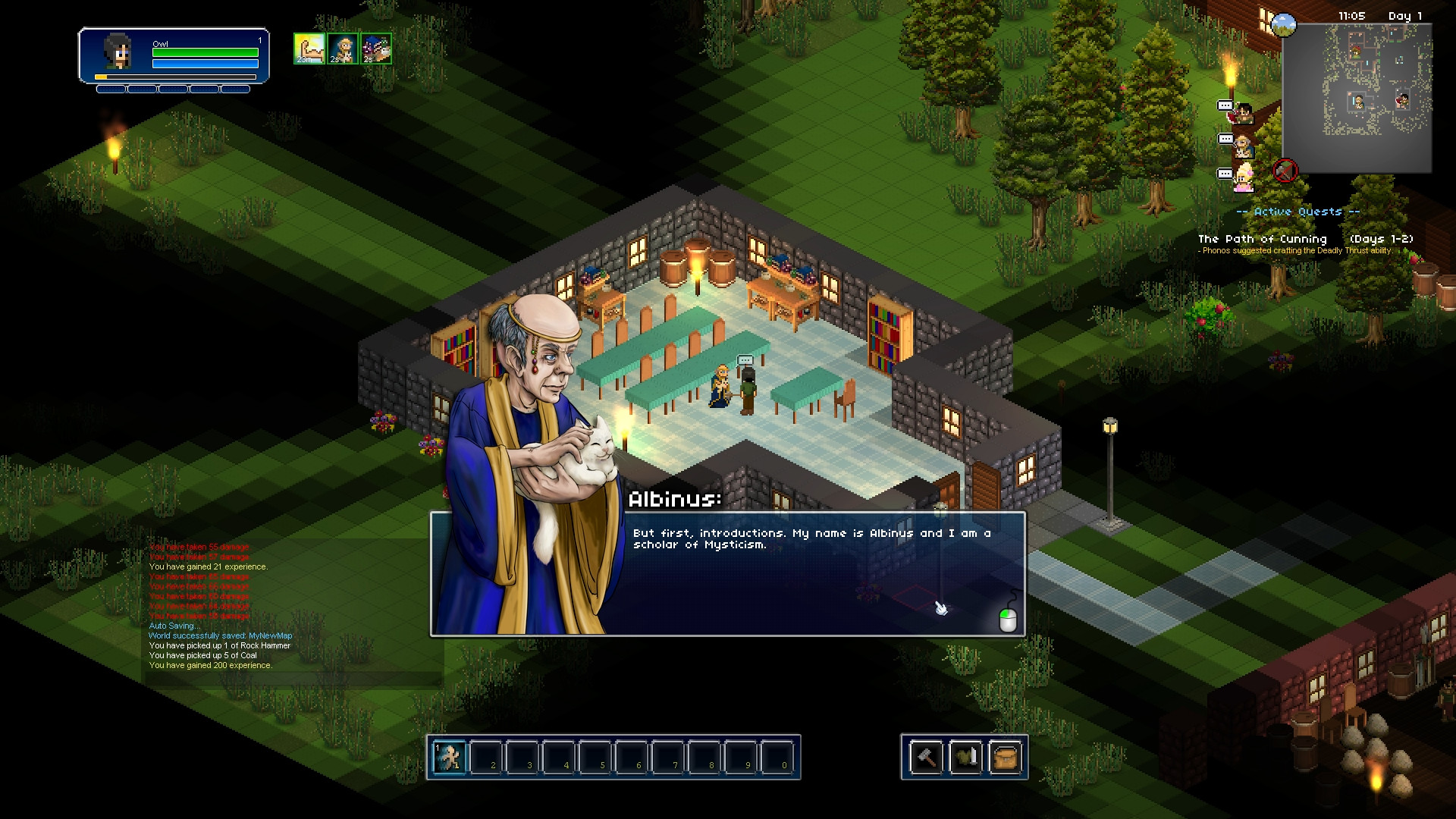 Shards of Azuria is an isometric, craft and build RPG. Create a character and a new world, then start your adventure by waking up in town. You are greeted by the locals of Azuria and begin to find your way around.

The inhabitants of Azuria will assist you on your journey, helping you obtain many Abilities or to satisfy your creative endeavour. Wander into the unknown, build a home and become strong enough to face the lurking evil. 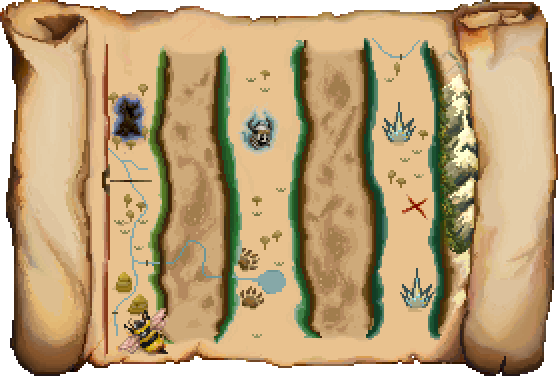 Aquire items from fallen enemies or stumble across rare crystals. Use what you find to craft a variety of items, including weapons, armour, decoration or abilities. Pick and mix between what you equip or use from 3 different class types.

Most Abilities are aquired through crafting with the support of the 3 class trainers that live in Azuria. The trainers will guide you the process of becoming adept with Mysticism, Cunning or Might. Choose to play with any of the 15+ Abilities of those types.

Dig, destroy walls or build your own home. Shape the area to your desire. Then add colour into the mix with the Paint Blaster!

We feel that Shards of Azuria is a game with the option of extended content in most areas. It is very much a template to allow for further development and on going improvement. But the scope of further development will also depend on the overall reception and interest in the game. Below is a list of potential features that may be developed over time. 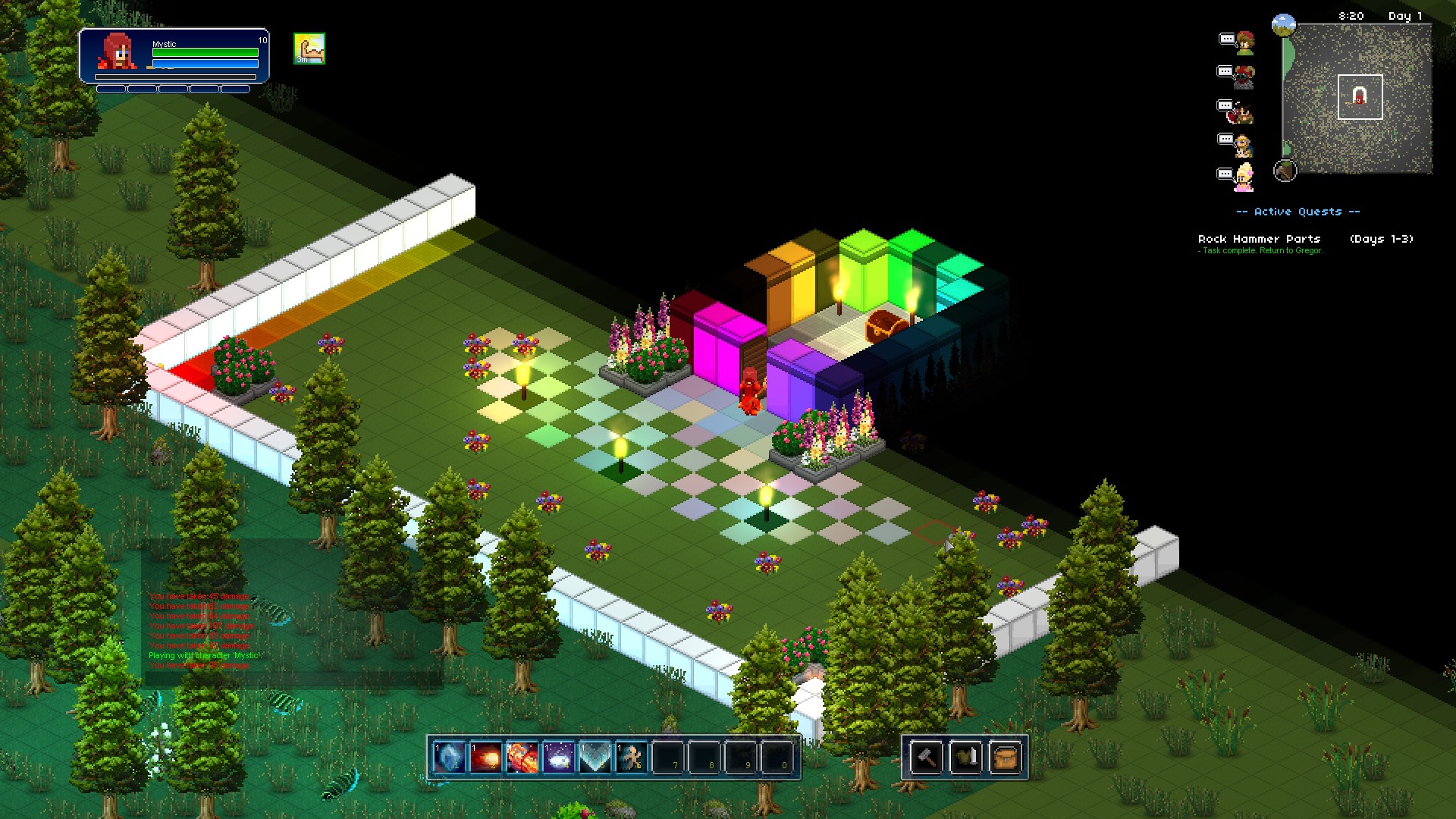 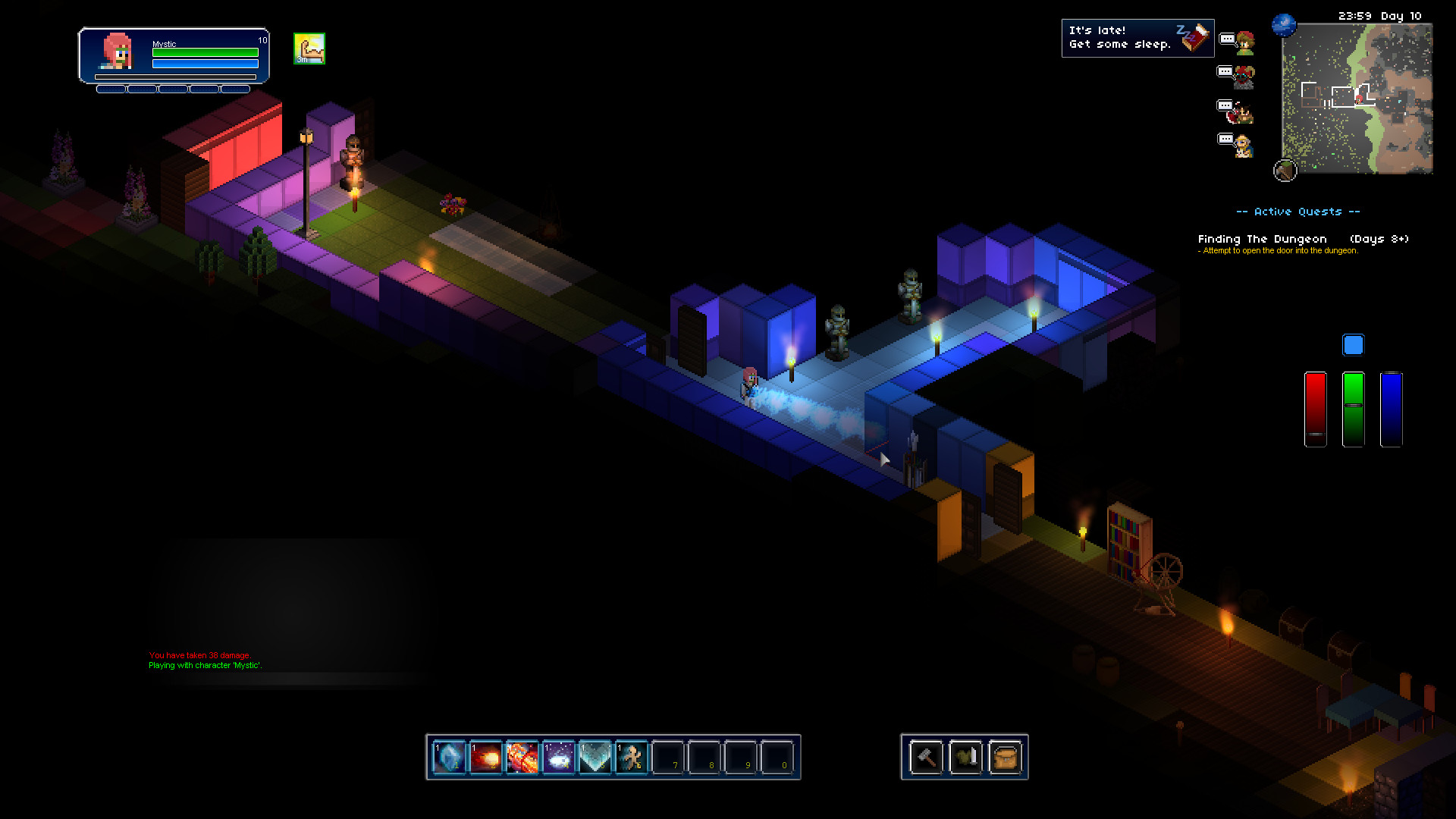 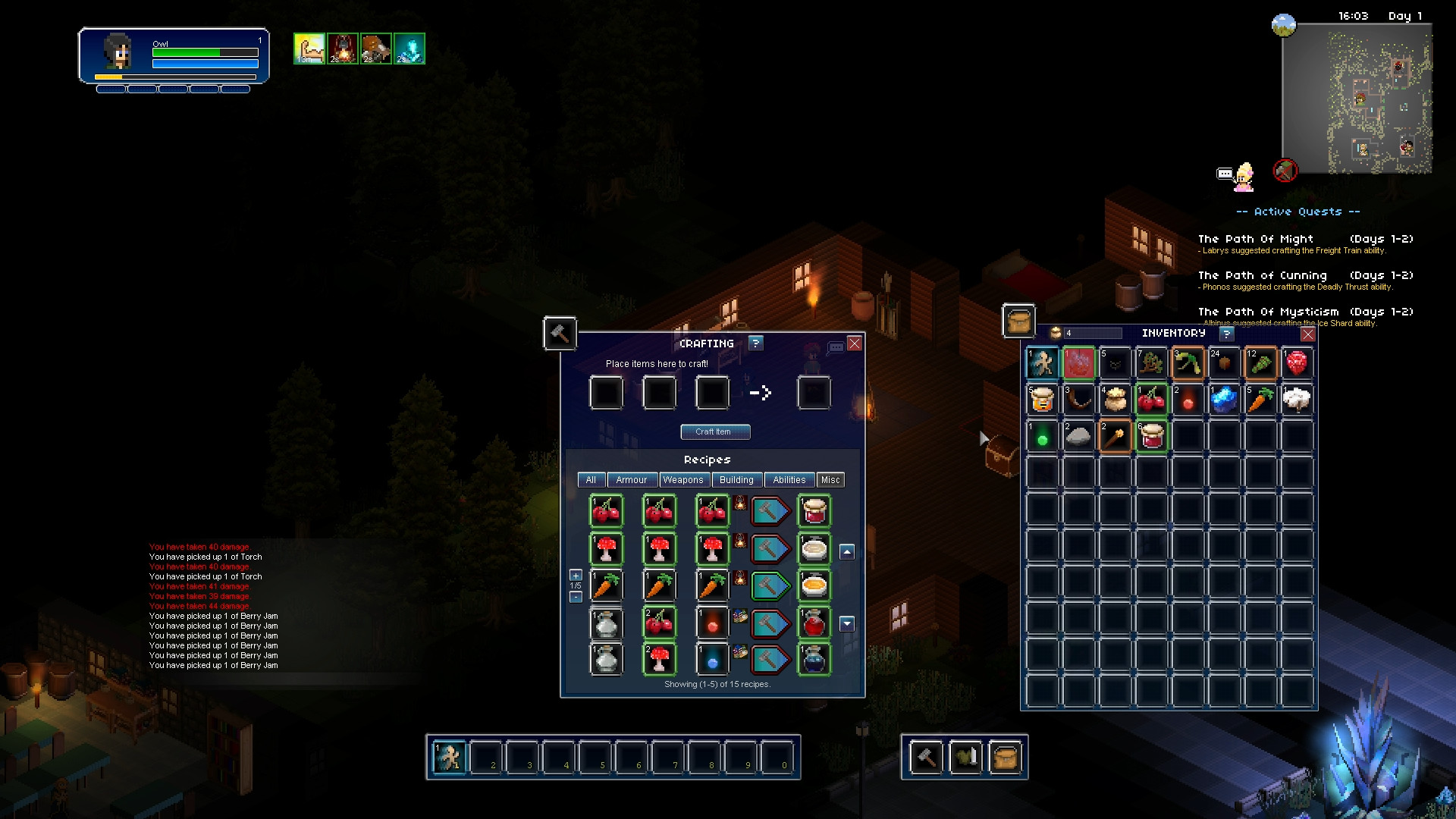 I'm giving this game a Thumbs Up because of its potential and because it's still in Early Access. However, if the Developers don't read Thumbs Up reviews, then I will change it to thumbs down in hopes that they will address some issues noted below.

It would be better if all pop-up tips were centered on the screen.

Also, it might be helpful if there was a toggle to hide the Mini-map.

OK, this might be user error, but no matter how I try I can't save changes to the screen resolution.


4. Each time you talk to a Vendor, you have to left click through all the text interaction every single time before being able to buy or sell anything. Very annoying. Please provide a way to skip all the text after the first time you've read it.

I don't mind pixel graphic games. If a game is fun who cares if it looks "old school."
But I wonder why developers choose to use those old pixilated fonts that look like a terrible dot matrix print out. The text in the NPC chat windows and the Quest text is not impossible to read, it would just be nice if it was more legible.


6. I like the message scroll in the bottom left corner noting useful information, but it would be nice if the font size could be increased. (I hoped changing the screen resolution would accomplish this, but...well, see above.)


*** EDIT: Ignore #7, found small button to set # of items to 'auto-craft'. ISSUE SOLVED. *** 7. When crafting multiples of the same item, you must click the button over and over, crafting one at a time. Please add a Craft All button.

I suggest auto-returning all materials from crafting slots to the player's inventory upon closing the crafting window.

Although still in Early Access, this game is very playable and quite fun. I look forward to seeing some issue fixes and whatever new things the developers have in store.. the game is choppy and the isometric viewpoint makes movement feel awkward.. Released 12-oct-2016.... yet still 2 of the first 5 quests fail to complete. For instance, there is a timed quest with skeleton where the skeleton only spawns AFTER the quest has expired. Block placement is bad, really painful, especially when there are full-height blocks around. Building tall walls, closing off caves, etc are all giant pains as a result. Also, timed quests? REALLY? What is the point of having the quests, including the basic tutorial quests, TIMED?. I haven't felt this addicted to a game in years. I grabbed it because I saw a review that said it is a mix of Runescape and Terraria. I grew up on Runescape, so I just had to try this. If you like Sandbox RPGs, then don't pass this game up. Shards of Azuria is a really good game. I wish I could shake the devs hand. If only more people created games like this. Shards of Azuria has so much potential.

I just don't understand these mixed reviews.. Are we playing the same game? This game is better than most of the sandbox RPGs on steam.

Some common issues I see people putting as thumbs down for are learning curve and controls.

- I didn't even know the controls were an issue till I read bad reviews. Maybe they are fixed now and those are old reviews. Only other thing I can think of is that someone doesn't like the controls, and they are just entitled..

- It is a sandbox game, so expect a learning curve. Maybe go stick to your linear handholding games? I had no struggle figuring out what to do. There is even icons showing who has quests. How much easier does it need to be? Isn't the idea of these games to explore and discover? A lot of you must be new gamers, because games never used to hold your hand all the time.. Pathetic excuse for a bad review..

And the list goes on with BS complaints of the smallest things It is like everyone forgot what EA means. Nothing in the game has bothered me. All these complaints are highly subjective.. This game can be described as bad for a few reasons. The first and one of the most notable is the skills, the skills themselves work as in any rpg but to get them you need to farm enemies until you get the resources to craft them at one of the three npc's who are there just for that purpose. Secend, there are ridiculous amounts of enemies everywhere, especially in the caves where you can't do anything without being swarmed by tons of monsters. And third, this game has only slightly more story then terraria and lets all remind ourselves that terraria has NO story and is still a better game then this. All and all in my opinion this game is bad and I regret buying it. P.S I'm not just hating for the fun of it.. This one is tough, it's a bit unpolished but it definitely has the ground works for a great little RPG. Classes are a bit limited to the three "rogue wizard warrior" but there is a bit of flexibility in mixing them up. Only 15 or so basic skills, 5 for each of the three "classes" but I hear in the discussions someone has found a few extra skills as drops. Once again a great framework for something really good, it would be easy to see a wide variety of classes as time goes on with development. Home building appears to be a large part of this game, it's kind of like minecraft meets everquest meets project zomboid. Once the basics are polished this game could turn into something really really ♥♥♥♥ing awesome if time and effort keeps pumping into the game. This brings me to devlopment... looks like it's a one man team but the devloper is pretty vocal and active with the small community. There are a few unpolished tings like torches and how much they light up caves and the control scheme is a little wonky (he's been updating this and taking suggestions btw) but he seems to be focused and on task. It's a bit early to see how regular he is with updates or if any new content is in the works... but for $4.99 it's totally worth checking out and fooling around with.. I really like the premise of this game. I like how it looks and I liked everything I saw in the trailer and on the store page. However, the isometric view makes this game almost impossible to play. It's extremely tedious to do something as simple as walk through a door or chop down a tree. Killing enemies is annoyingly difficult as well since you have to perfectly line up with the same row they're in or you won't hit them. I tried for a few hours to dig and mine and craft and kill enemies and none of it was fun for me because it was just so tedious to do everything. I also didn't like that everything is so dark. The torches you can craft and place don't provide enough light to be of any real use and as soon as you're a few blocks deep into a hillside, you're lost in utter darkness.
That's not to say I hate the game. I want to like it-the idea and trailer looked so good, but actually playing it is too annoying and difficult, that I can't bring myself to recommend it. It IS in early access, however, so I'm curious to see how it evolves over time and if the control\/gameplay kinks can be worked out. If this weird, klunky control system is how the game is supposed to function and it's not going to change, then I probably won't be coming back to play this again. I just can't get into this game if actually playing it is a chore.. Great game for the price point. Has plenty of content to keep you busy for a number of hours, nice progression as a character, at least down the "might" path, havent tried the others. Love that its like an old school action rpg, kinda diablo 1 style but with the ability to terraform\/carve your way through the world, and the best items and abilities are crafted. using this as a base, this game could be expanded to be to old school action RPG's what terrarria is to the metroidvania series.

TL:DR great game for price but i want to see it grow, could become something amazing.