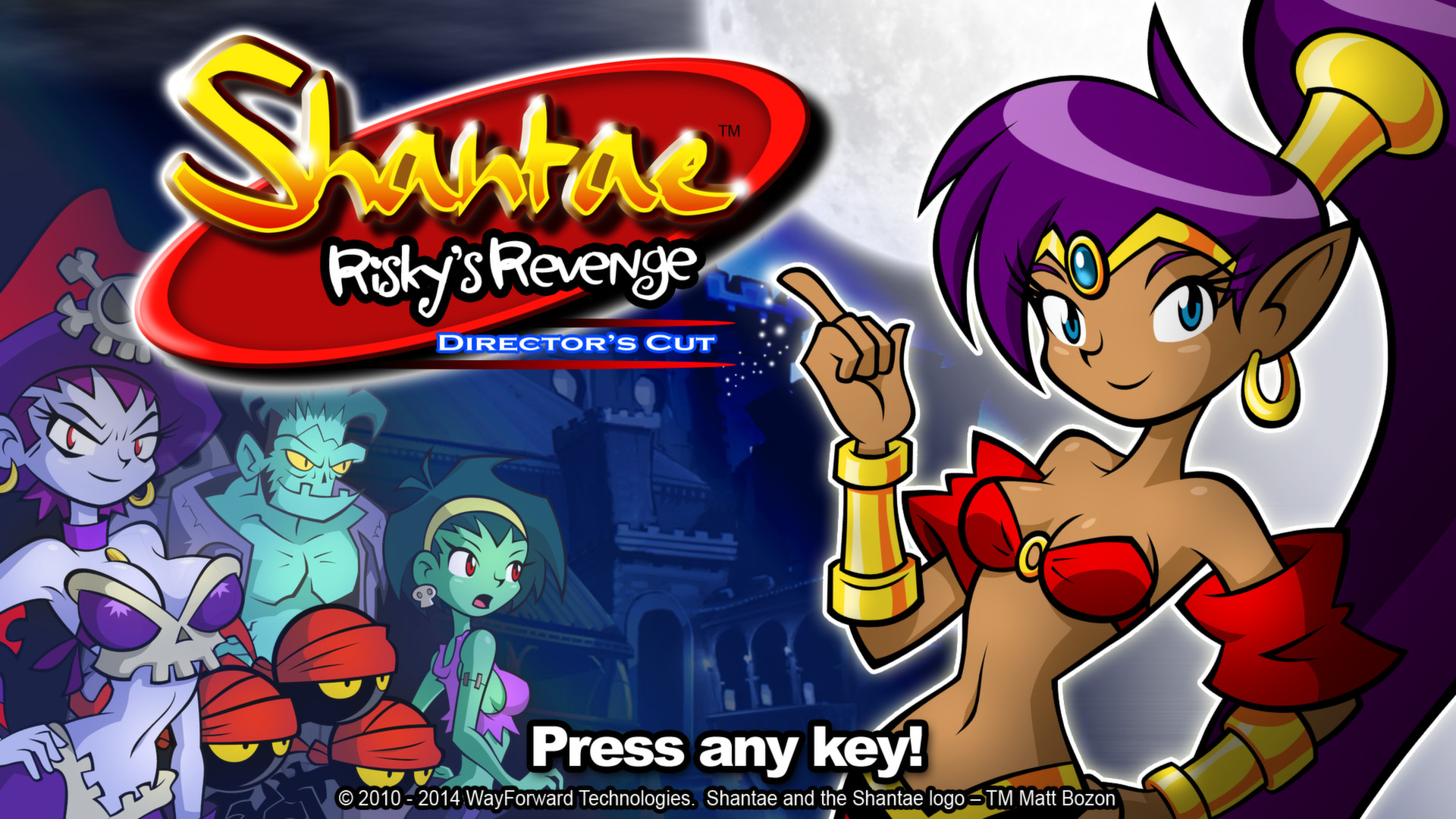 By popular demand, Shantae: Risky’s Revenge – Director’s Cut is now available on Steam for Windows PC! This brand new version combines all of the award-winning content from previous releases – and adds even more! The pixel-based masterpiece remains intact, newly augmented with HD portrait artwork and extra challenge. New illustrations, Steam Trading Cards, Achievements, Emoticons, Controller Support, fully configurable controls, and an unlockable Magic Mode with alternate costume round out the package. This Director’s Cut also introduces a re-imagined Warp System, perfect for speed runners and returning players alike! Play one of the most critically acclaimed handheld series of all time, now on your PC! 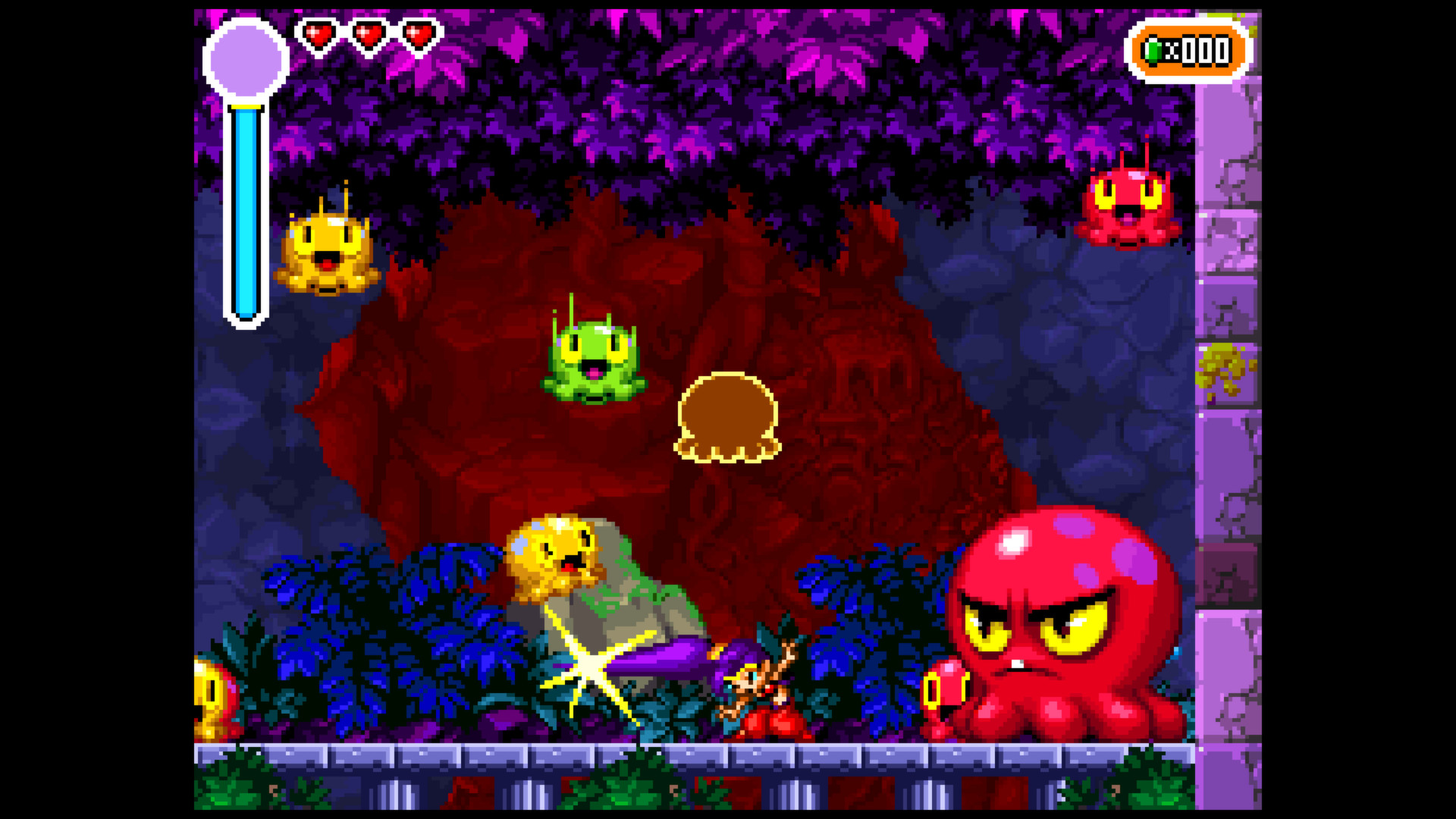 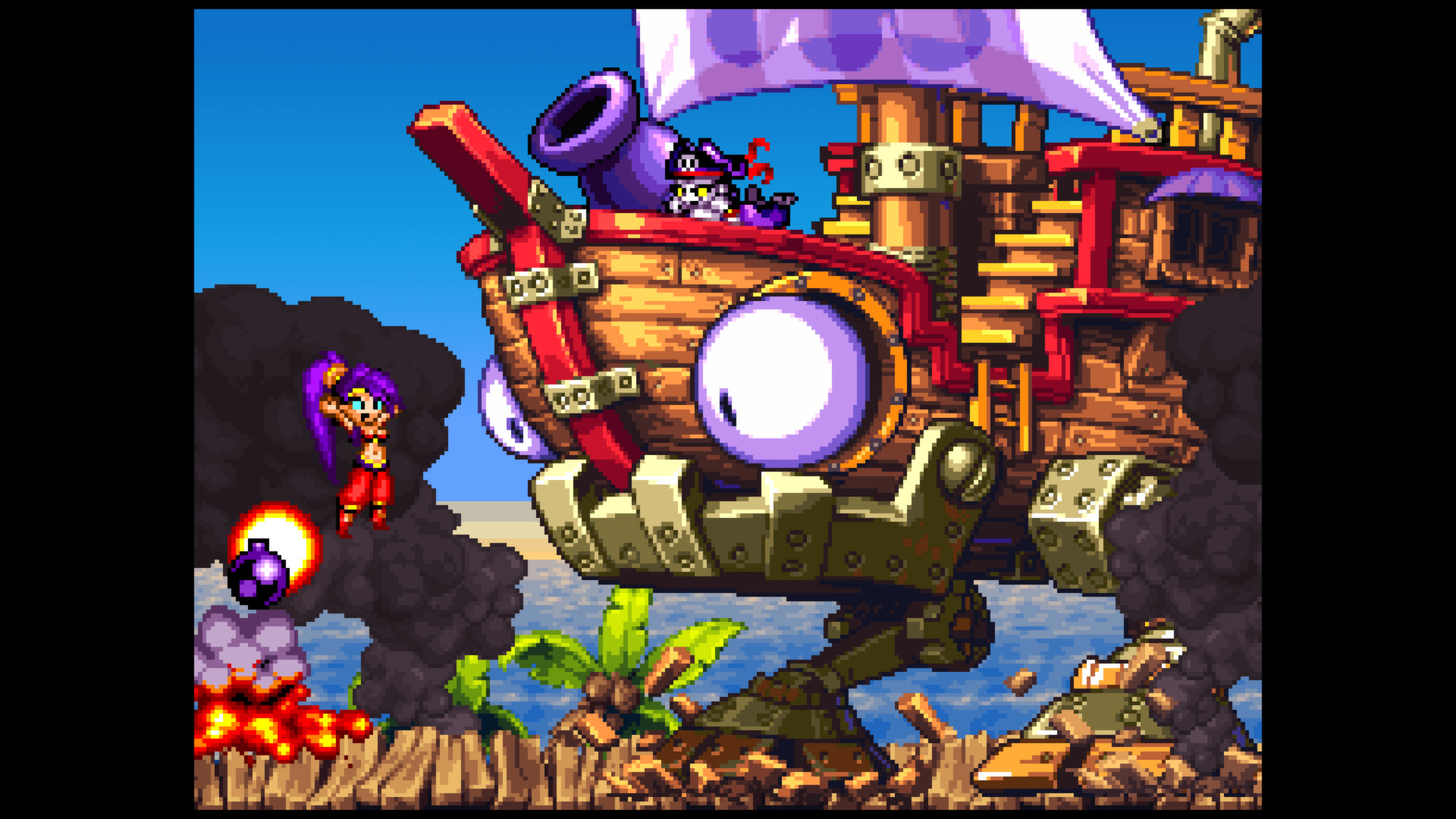 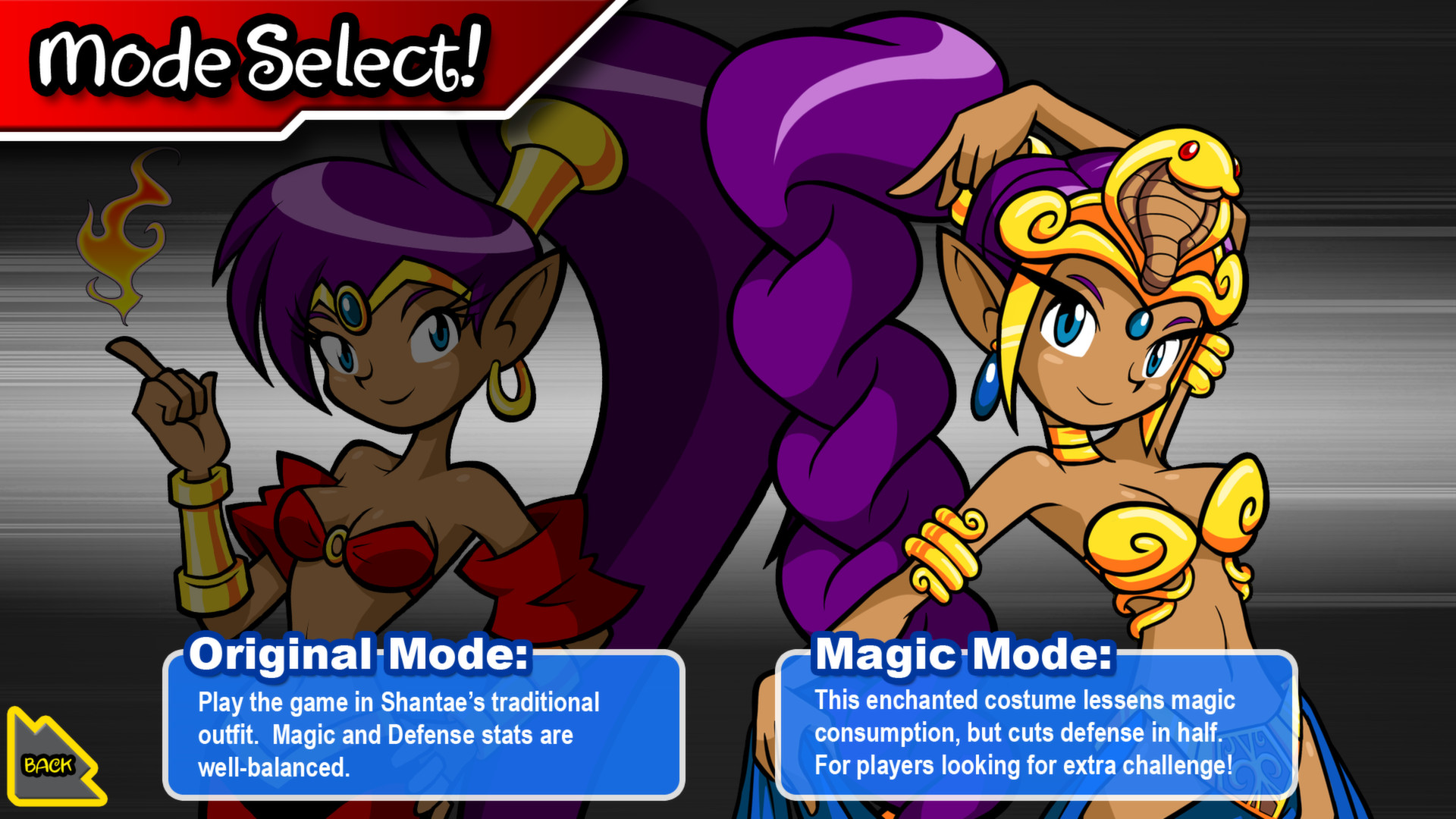 
I am going to try my best NOT to fanboy about this game or even this series. Oh who am I kidding I love this game and I love the Shantae series. Granted this is only my third favourite in the series but Risky's Revenge is still a really great game just purely for what it did do for the series and how it improved on what the first game established in it's gameplay and how after this Pirates Curse came and the rest was history even if this is still a somewhat obscure and niche series. Well about as niche as a series everyone keeps demanding the main Character be added to Smash Bro's can be. But hey, at least she's a better pick for the roster than Doom Guy. Yes, people actually want Doom Guy for Smash. And people wonder why I hate the saying "Listen to the fans."

For as much as the first game has aged over the years (though granted it's at least more playable than some other Gameboy games that also haven't aged as well.) the original Shantae for what it is still an interesting little game. Risky's Revenge improves on everything the first game did. This is a Metroidvainia. I hate that word by the way. You explore the world of Sequin Land and have to find key items to open up new pathways or get access to certain areas, including the labyrinths were you have to find the three magic seals spread across the land. Of course, the items aren\u2019t the only things you need to use to progress. Shantae is a genie... Well half genie. And a belly dancer. And one of her unique abilities is that she can dance to transform into different animals that you use to progress. In this game the animals are the monkey which looks absolutely adorable and can cling to walls, the big \u2665\u2665\u2665\u2665 off elephant for charging though cracked bricks and the mermaid because Shantae isn't beautiful enough already. Oh and it also let's her swim underwater. Back in the gameboy game this system was interesting but not very intuitive since you had to input the moves manually meaning that if you forgot what to input you would have to keep going back into the pause menu to see what you were meant to input. Although there was one dance move you could spam where Shantae winked at you and jiggled her butt if you were into that which made it worth it. This time around it's much more streamlined since all you have to do is hold down the button until you get the transformation you need. How usable items work has also been improved. There is a shop in Scuttle Town where you can buy and improve your usable magic items and rather than them all being single use items this time around they all work on a magic meter that can be recharged with magic pots and it also cuts down on having to go back and buy more and more of the same item. And given how Scuttle Town is the only hub world in this game that is a god send. There's even a fast travel system using the squid statues and a map for if you get lost. Some people don't like how the map is designed but honestly I'd just happy I finally have something to help me out if I get lost which doesn't happen to me since I know my way around better than I know maths especially since Sequine Land doesn't loop around like it did in the first game but I like that it's there anyway. There's no Day Night cycle where monsters get stronger at night time anymore which is either a good thing or a bad thing depending on how much you actually liked that system from the first game. And really, I just love the characters. They are not super complex or anything but Rottytops, Risky Boots and especially Shantae are just way to lovable for me to not like them. Same can't be said for Bolo because of how much I hate the stereotypical idiot character! But I absolutely love Rottytops, not for this game but rather because of something in Pirates Curse. The same can also be said for Risky Boots. And of course, Shantae herself is a lovable and funny charicter that I can\u2019t bring myself to dislike in any capacity. Oh, and if you beat this game you get to see Shantae in a golden bikini and panties! No really. Or a blue seashell bikini depending on what version you\u2019re playing. In all seriousness the unlockable Magic Mode is basically this games version of hard mode because while it does give Shantae a nice new look and reduces the magic you use for items you also take less damage as a result meaning that you have to be extra carefull during enemy encounters. Have fun.

In case it wasn't obvious I do genuinely think Shantae: Risky's Revenge is a really great game though I'd be lying if I said it was "Perfect." Then again nothing ever is. Not even Persona 5. And I absolutely love Persona 5. First, Bolo. Because I don't know when else I'm ever going to get a good opportunity to rant about my pure hate for this prick! I said before that I hate Stereotypical Idiot Characters and Bolo is the worst of it. He's not so bad here but his entire existence in this series feels like a plot device. He helps Risky Boots without knowing about what her true intentions are in the first game, he works for Techno Barron in Pirates Curse who's helping Ammo Barron and in Half Genie Hero he fails to deliver something to Shantae's uncle because he is way too into ogling the lady at the bath house. At least put her in Shantae's Magic Mode Outfit from before then I'd be less harsh on him. Is he meant to be comic relife? Because the games are funny enough as they are. Okay now onto the actual criticisms, this game is really short. On my first playthrough it took me only five hours to beat. Apparently it was meant to be episodic, and that would be a reasonable thing to assume given how this game ends, but I don't know where this fact originates from. To be fair, this game does have a fair amount of optional collectables so it could be longer if you wanted it to. Not to mention the boss fights really aren\u2019t that challenging except for the final boss which for story reasons I won't actually talk about. Also, and this is going to seem like a really wired thing to say but Shantae and Rottytops look way older in this game compared to how them look in Pirates Curse and Half Genie Hero. This isn't me trying to say the art is bad because honestly the art for this game is really good.

To end with I am so glad this game happened because if it didn't then we wouldn't of gotten the amazing games that came after this. And honestly even though I think those two are way better it is still worth playing this and maybe even the first game if you\u2019re really that curious though I\u2019d honestly just recommend skipping it unless you\u2019re a massive fan like me. Hey nothing wrong with showing support for a series you love right?. Shantae is a really fun series. The platforming and action work really well and the games are clearly built with care and aesthetics in mind.

This one was originally released as DSiWare and on iOS and the graphics do show it as a mobile port, but if you can get past that it plays well and is a great action platformer.

The movement and controls are flawless which is a big part of why i love this series. The story and characters are goofy and well designed. I've yet to beat the game, but from what I've played already it is fun and I am definitely gonna run through the whole game.