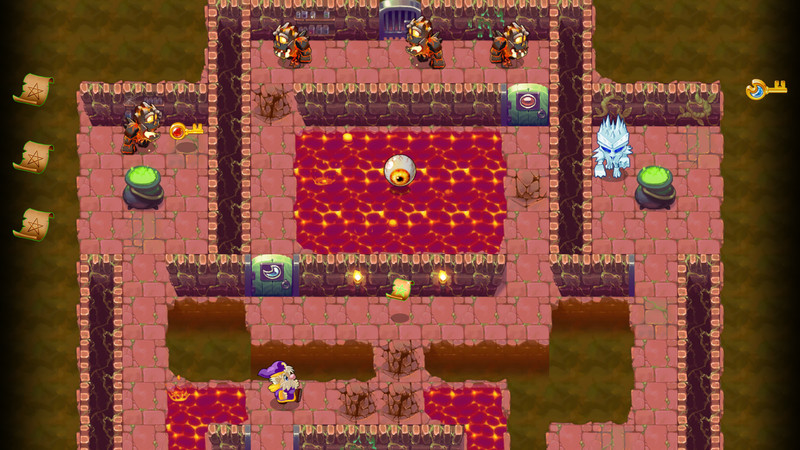 A retro-inspired masterpiece, Mystery Castle is the one puzzle game that will rule them all!

As Monty the Wizard you must solve 180 unique stages and save the five Castles of Mystery from the evil that lurks within. Are you smart enough to outwit a giant snowman? How about a half-witted ogre? Along the way, you'll meet a host of colorful characters, from Stumpi the treasure-hungry dwarf in the Fortress Underground to the bossy Mr Chow in the Mystical Pagoda. They will all have plenty of advice - some of it might even be helpful!

You will discover hidden paths with a magical lantern and create your own with a well-placed bomb or two. In one moment you'll be dodging between boiling lava and Fire Golems, and in the next sliding perilously over sheets of ice – just be sure not to fall to your doom into the bottomless abyss. You will need to transform into a troll to move heavy objects, a bat to fly across deep chasms, and a frog to squeeze through tiny holes. But how will you avoid the deadly gaze of the Eye-Spy that can turn you to stone in a blink? Drink a handy potion to shrink to a fraction of your size or perhaps sneak past by possessing a nearby ghost.

Your options are only limited by your genius. b4d347fde0 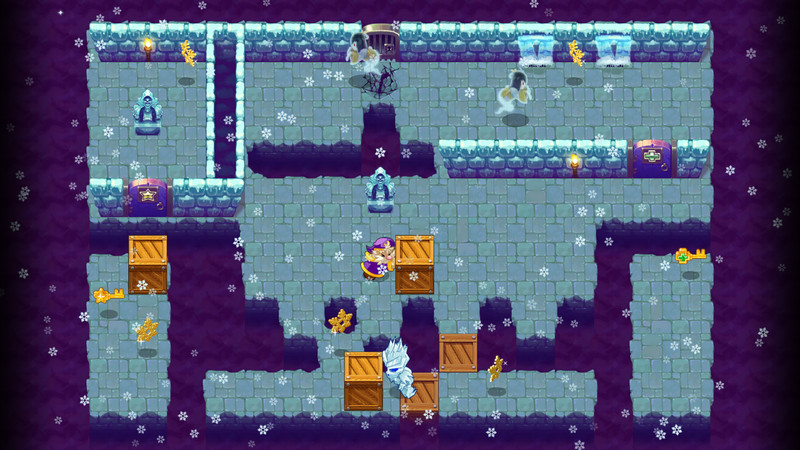 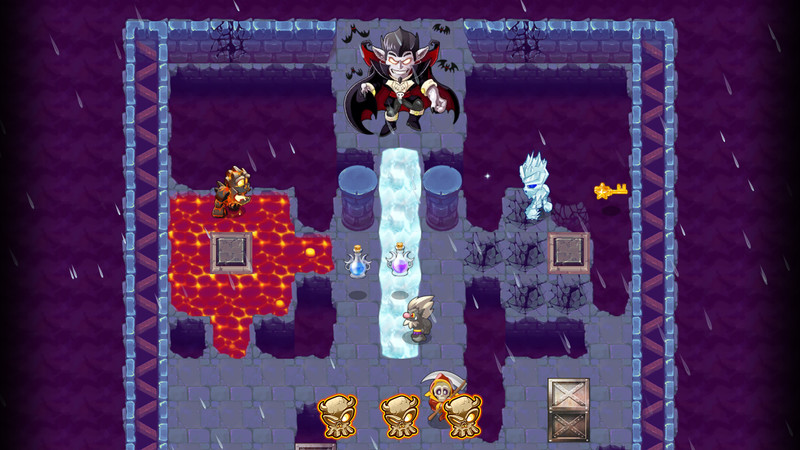 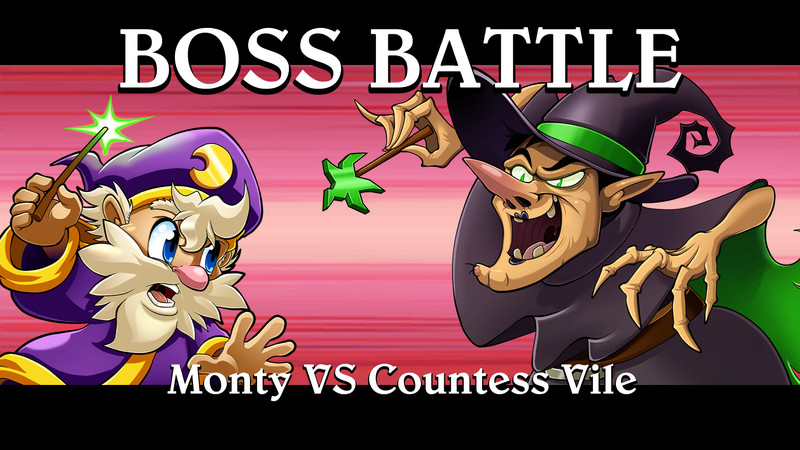 Mystery Castle is a refreshing take on the puzzle game genre, having transitioned from Steam Greenlight to full release this month. At its core, it has all the features that one can find in any of the early videogame classics,\u2013 straightforward objectives; charming graphics; easy-to-follow story; and gameplay that is easy to pick up and play but enjoyably challenging to master. However, it\u2019s easy to simply say these and leave it at that,\u2013 but what good would that be in a review? Let\u2019s break these down then, one by one and see just what it is that makes Mystery Castle such a pleasure to play.

Like all of the classic heroes, Monty,\u2013 wizard-in-training and fancy hat owner extraordinaire,\u2013 just so happens to bump into people in need. In this case, it\u2019s the dwarf Stumpi, who informs him that the fortress of the dwarves has been conquered and its people enslaved! And just like that, Monty is on his way. It\u2019s refreshing to see a hero who is played mostly straight in this era of edgy anti-heroes and villainous protagonists. Mario, Link, Simon Belmont\u2026 none of them ever never needed to ask why they had to save their princesses or protect the realm,\u2013 Monty continues this time-honoured tradition. Monty is a hero, and in guiding Monty through mazes, traps and puzzles, the player becomes a hero as well.

So you have objective and story rolled into an easily understood whole,\u2013 no need for melodramatic backstories or metaphysical angst. After a simple tutorial stage, you are thrown straight into the gameplay. However, this is slightly misleading. I say tutorial stage,\u2013 but playing Mystery Castle very quickly makes you realize that the learning curve doesn\u2019t just stop after the first few levels,\u2013 it just goes up and up and up. Every level is designed to challenge, whether it\u2019s through highly devious map design or new mechanics, and a player will be constantly teased by the inventiveness and occasional deceptiveness of the solutions. With five worlds to explore and over thirty levels each,\u2013 and it looks like there\u2019s even room for future expansions to add new worlds,\u2013 Mystery Castle is a game that promises hours of entertainment.

The controls are simple, making it as easy to pick up as it is to take a break from. Unlike many games today,\u2013 I\u2019m looking at you, Attila: Total War,\u2013 Mystery Castle doesn\u2019t make every level massive project. It offers instead highly engaging puzzles in bite-sized chunks,\u2013 perfect for both the casual everyman gamer or those who wish for a genuine intellectual challenge. With the number of games available today and the limited time most people have in the day to play them, it is very refreshing to see a game that doesn\u2019t try to hog time, but instead offers short but highly enjoyable bursts of entertainment.

The graphics, as I\u2019ve said, are charming. Colourful and vibrant, but very easy on the eyes, the graphics have an appeal that echoes that of the golden age of video gaming. Playing the game for a solid amount of time causes no discomfiture on the eyes, and the cartoonish quality of the art does go some way to making you feel like you\u2019ve stepped into a fairy-tale world of heroes, monsters and, of course, fancy hats.

Mystery Castle is, in my opinion, certainly value for money. It has kept things simple but addictive. It has exactly the same qualities that made some of the classics classic. It has a charming protagonist, a world to explore, and a story that is straight out of a fairy-tale. To me, this is a recipe for a highly satisfying game. Monty may have never met Mario, but ye gods, with his moustache and that fancy hat? I rather think they should be walking side by side.. Still early in the game, but this caught my eye as being reminiscent to classic games like Adventures of Lolo\/Eggerland Mystery

One thing I don't like is the races, GAH! The races. You must be spot-on perfect in order to succeed in the race levels, otherwise you'd had to start that race all over again. Also, there are 4 locations (Temple, Pyramid, Harbor, and Academy[?]) that were not actual castles that seemed pretty interesting to play through. Extra DLC maybe? I don't even seem to know why they are in the map in the first place.. A fun little game with challenging, but fair puzzles. Worth a look.. An excellent puzzle game in the vein of Sokoban and Adventures of Lolo. The graphics are charming and the music doesn't get repetitive even after listening to it for a long while. The sound effects the main character makes upon dying do feel a bit out of place, though.

Most of the time you have everything you need in order to solve the puzzle staring right at you, and it's up to you to figure it out, which is exactly the kind of puzzle game I like. There are a few cases where you need to check what switches do, but that's still acceptable. Enemies are of the passive kind, they'll never actively chase you. Couple of times you do need some timing skills to get past them, but overall it's very much of a slow-placed, thinking man's game. It's the kind of game where you can stare at the screen for 30 minutes trying to solve it in your head before executing your plan. And then feel an equal amount of pride for doing it and shame for taking 30 minutes to figuring out just where the boxes should be pushed to.

The puzzles can get quite inventive at times, cleverly misdirecting the player and placing red herrings to sow further confusion. It took me 15 hours to play through the game, solving every puzzle without any help. There are still some castles in the map that can't be entered, so I'm hoping they'll be added in a future patch. Or even DLC, I wouldn't mind paying a few bucks for more of this.

If there's anything to criticize, it's that the puzzles' difficulty is uneven. In every castle the first 20 or so levels (out of 36) are pretty easy, then the difficulty starts ramping up. But there were levels in the third and four castles that I found much harder than anything in the fifth castle. Still, that's a minor complaint.