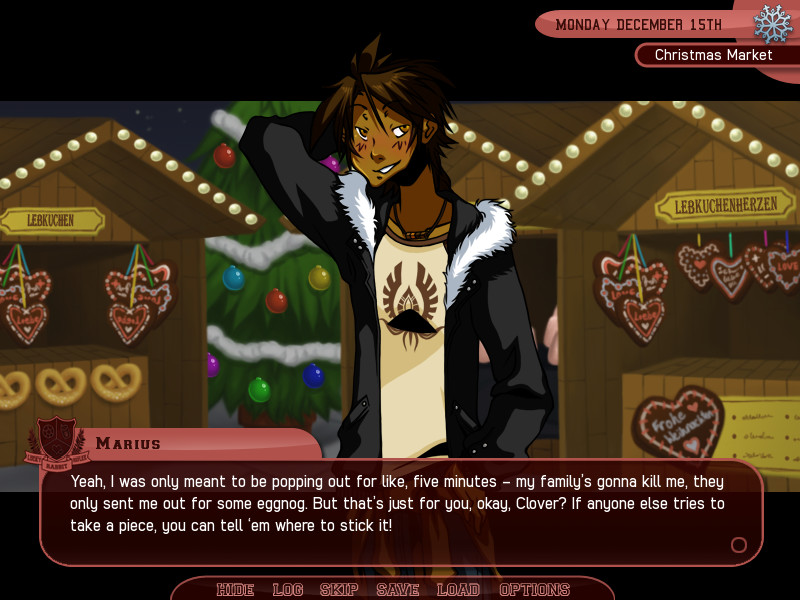 An otome (Girl pursues Boy) dating simulation game, Lucky Rabbit Reflex! sees our seventeen-year old heroine beginning her first and final year at a new school. Will she find friendship - or even romance - amongst the motley crew at Northmain College? (Or a decent fashion sense, at the very least!) 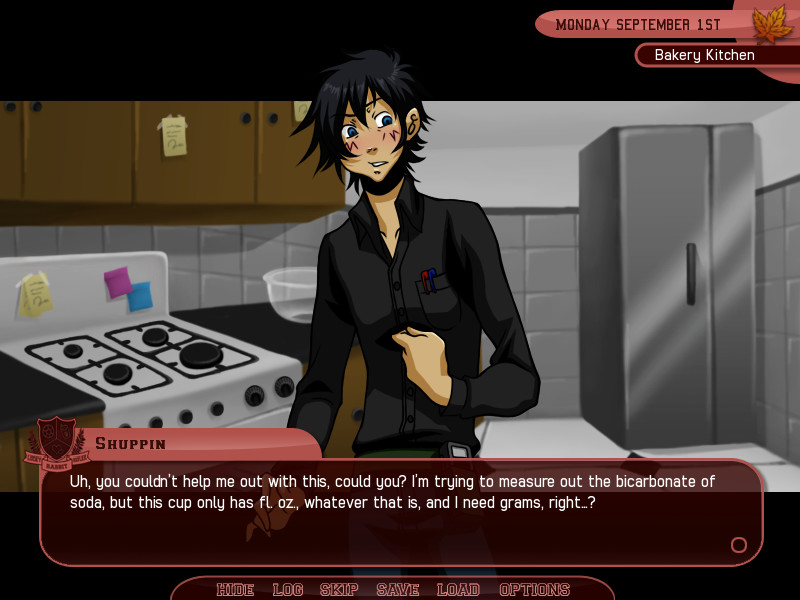 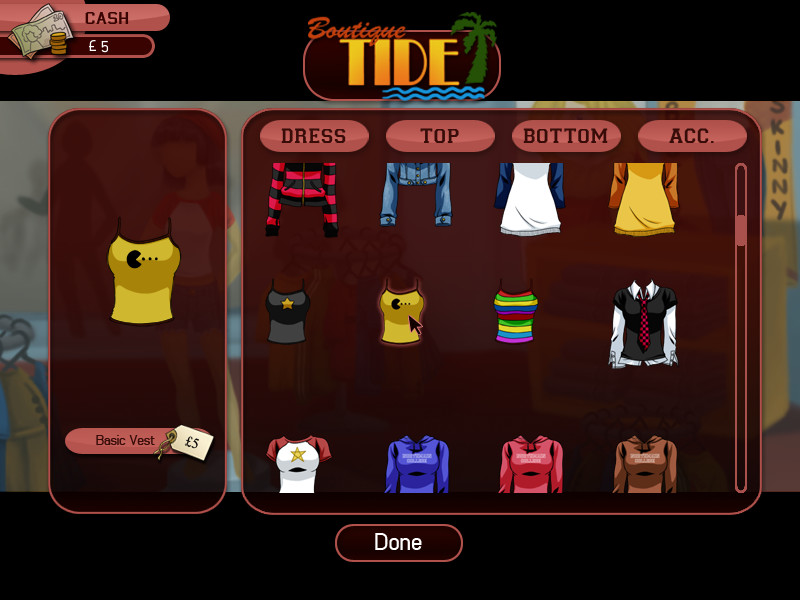 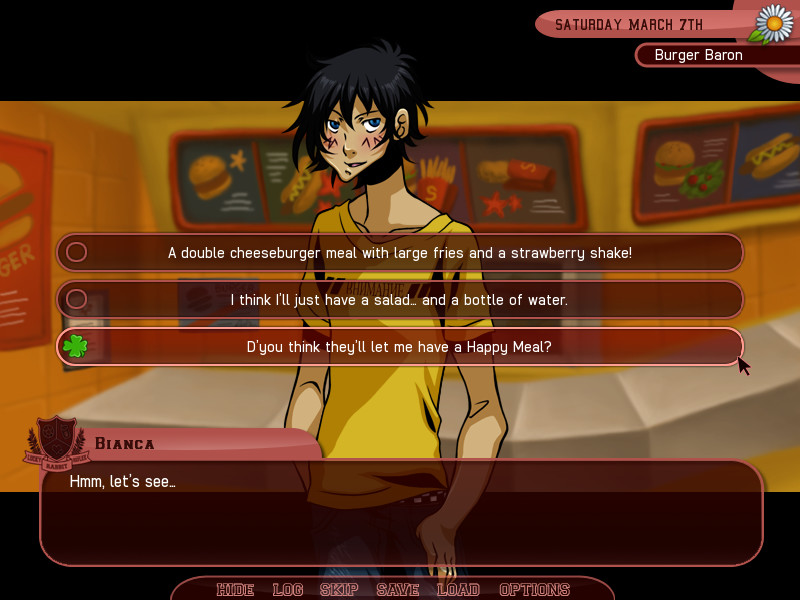 The characters and the story are super cute!!Perth are just utterly adorable.My heart is exploding throughout the whole game!!And I love the building-up status system and clothing system,but i wish there are more dialogue about the status we reach.The art style is unique and cute,but sometimes their head seems to fall off !The storylines are diverse and interesting,will try it all!

If you are a fan of cute,relaxing otome game(espicially for tokimeki memorial gs fan),you should reaaaally buy this!

. Mixed feelings about this game.

On the one hand it is a tiring and complicated stat management game.
On the other if you manage to sort your stats out the characters romances are cute, endearing and well thouoght out.

Patience is key here. Perhaps even a waklthrough if you are okay with that kind of thing.. Oh gosh I love this damn game. It is so endearing and weird in its own special way.

+ points for semi-angsty-red-head who is secretly sorta sensitive and 'intellectual' which means he likes books n stuff, rite?

+ winning for costumes and dress-up....though....it srsly bugs me that you cannot actually SEE the MC wearing her new threadz that you just saved up for weeks to buy..... grrr. srsly, need patch for that. and n00dz.


Only drawback? Dat chin doe. Good thing I am too drunk to notice most of the time when I am playing, but at first I almost did not buy the game because of chin. But yea it is apparent this is the 'chosen style' of art for this game and I can complain about it but it does not change the excellent text and overall mood of the game. I think the funky chin thing kinda adds to the lighthearted nature of the game. if you want supr srssss get Amensia or something like that (which I love in its own special way too, ofc) but this is a separate animal entirely. and I can appreciate that.

Will probably modify\/update this after I finish playing cause I am sure I will have some thoughts to add...

PS: needs moar lesbian. but like I said I am not through it yet so mebbe I will be (hopefully!) pleasantly surprised (?)

PPS: doubleplus points for 2005-ish references. ahh, nostalgia... where my flip phone at?! also LOL add track pants = instaStreet!. This otome is pretty good! The character routes are fun and interesting. It's a nice, light-hearted, stat-raising otome with great characters. The sprite art is a little iffy, but the CGs are pretty cute.. This game is the best fun I've had in ages. The characters are what really made the game shine. All of them are dynamic and interesting and by the end of each of their routes i really liked all of them. The writing is good and has lots of quirky British humour. I also really enjoyed the protagonist she was really fun to play as. I would recommend this to all otome fans in search of some light-hearted fun.. Love it ! Great example of a really good otome game. Shame that not all are like this.
Very funny. FULL of Surprises. Great characters. Challenging but overall fun coming up with strategies.
Time flies with this one, my only regret is I didn't catch it on SALE !. Recommended if you enjoy a fairly straightforward otome visual novel \/ stat raising game. Detailed enough to get to know the various characters and doesn't feel too short. Not a lot of surprises, but I thought it was good - I don't always need or want harrowing and dark, and these characters actually seemed to act more like normal people (of 17-19) than in many games.

+ Enough unique features\/plots in the different storylines to be interesting as you try to complete the different endings
+ Likeable characters
+ Generally well-written (and the dialogue was more realistic than usual)
+ UK setting (I really enjoyed the setting and the slang - so many games are set either in Tokyo or the US)
+ The endings (Best, Good and "Dual") were quite well done; I thought the "dual" endings were a neat touch
+ The intro to the game pokes fun at itself...

- The artwork takes getting used to; many people have criticized the strange chins and it *is* a distraction (but I found many of the CGs were fine)
- Parts of the game are pretty repetitive
- Not sure why you can "fail" when attempting to improve a skill, since you can just save and reload

Overall: Glad I bought and played it, sorry I'm just about done.
. I can appreciate the time and effort put into this game but after only 10 minutes of playing I couldn`t get past the weird characters including your own with the very weird chin and body joints making you look more manish then woman and also the way everyone spoke to everyone and the cg`s were an eye sore. Also what the characters say just don't seem very believable either as everyone seemed to be hitting on everyone.

If you could choose what your character looks like even would make this better and why does everyone have such weird names?

If you can get past these things the game would be ok but at 10.99 on sale and 21.99 regular price it just doesn`t seem worth it to me when I`ve played some pretty amazing games for half those prices regular.. played the hell outta this years ago, before it was even on steam. its not perfect but it was also made by 1 girl like a decade ago............. so im willing to give it a pass on a lot of things :) i still think its a very cute lil dating sim. marius is best boy (rhett is a very close second) only thing is that i wish the girls had full routes too~