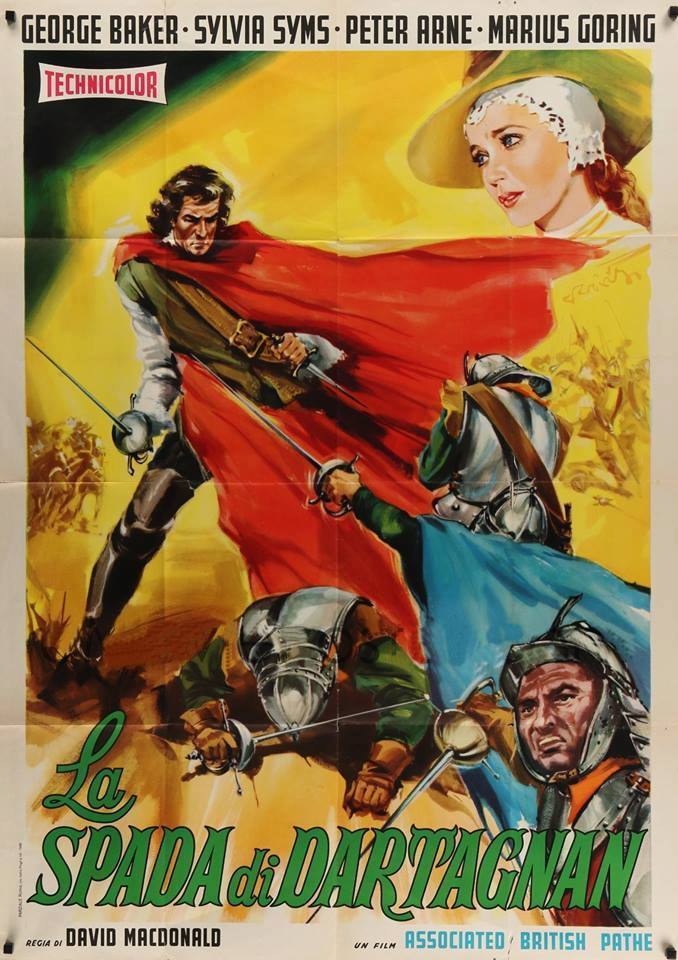 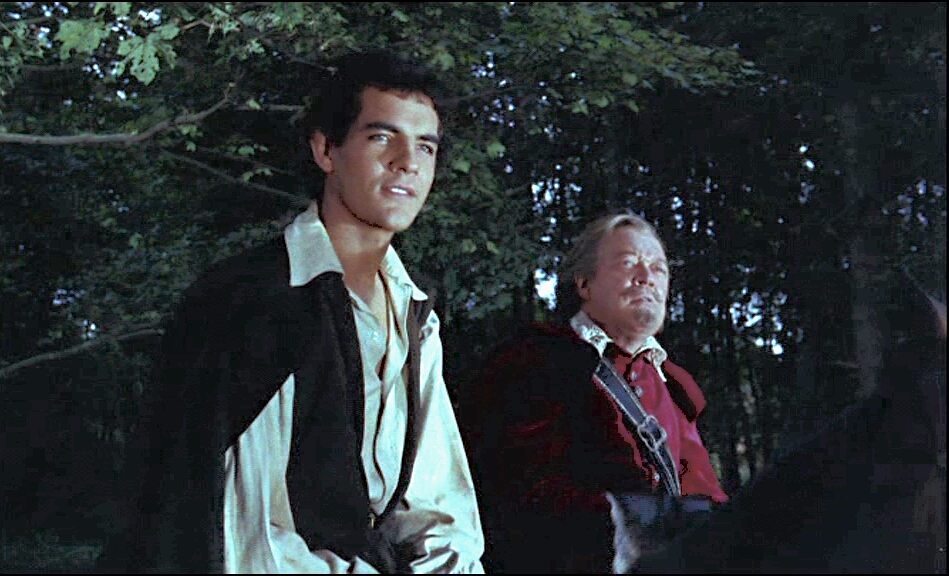 After the battle of Worcester at the end of the Civil War, the main aim of Oliver Cromwell's Commonwealth is to capture Charles Stuart. The future king's escape depends on the intrepid Earl of Dawlish, who as the Moonraker has already spirited away many Royalists. Dawlish travels to the Windwhistle Inn on the south coast to prepare the escape, where he meets Anne Wyndham, the fiancée of a top Roundhead colonel.
The Moonraker is directed by David MacDonald and adapted to screenplay by Robert Hall, Wilfred Eades and Alistair Bell from the Arthur Watkin play. It stars George Baker, Sylvia Syms, Marius Goring, Peter Arne, Clive Morton, Richard Leech, Iris Russell and Paul Whitsun-Jones. Music is by Laurie Johnson and cinematography by Mutz Greenbaum.

With the English Civil War just finished, Oliver Cromwell (John Le Mesurier) aims to capture Charles Stuart (Gary Raymond) to stop him replacing his executed father on the throne. However, a Royalist hero known as The Moonraker (Baker) plots to smuggle Stuart to France before Cromwell and his Roundhead followers enact their plans.

A British swashbuckler full of derring-do heroics, sword fights, boo- hiss villains and gorgeous Technicolor photography. Why then is The Moonraker little known or under seen? Perhaps it comes down to availability on home formats over the years? Or TV rights preventing it from being shown elsewhere other than good old Blighty? Either way it's a shame and fans of swashbucklers should definitely consider seeking this one out.

The name Moonraker in this parlance is put to a smuggler who would hide his goods in the village pond and then go back at midnight to rake said goods out. Here the " Moonraking" involves smuggling important human beings out of harms way. The Moonraker in question is Earl Anthony of Dawlish, a Royalist Cavalier Scarlet Pimpernel type, a bally hero of devilish good looks and courage unbound; I mean why jump through a gap when you can dive through it instead? Cue under cover disguise, bluffings between hero and villains, simmering romance and a base station inn where many shenanigans unfold. It's not based on historical facts, it's a work of fiction, but much thought has gone into the period design, collectively impressive in architecture, weapons and clothing. How nice to actually see an English Civil War based buckling of the swash!

Location work is spread about the place, where even though much of the second half of film is based inside the crafty Royalist supporting inn, there's still some lovely exteriors to enjoy. The makers missed a trick by not homaging the lead character by doing some work at beautiful Dawlish in Devon, but Wiltshire, Dorset and Kent prove to be appealing places for scenes. Ronnie Hilton's theme song over the opening credits is a bit off the pace of the movie, in that it doesn't quite fit as a starting point, but the song itself proves to play well as part of the narrative.

Cast are mixed but nobody stinks the film out, Baker is no Flynn, Power or Granger, but he makes for a very likable handsome hero and he is very comfortable performing the excellently choreographed fight sequences. Syms looks radiant and gorgeous, even if the character doesn't call for her to thesp greatly. While elsewhere the most fun performance comes from Whitsun-Jones as Parfitt, a big rotund Royalist full of bluster and bravado, when asked his occupation he bellows "gentleman", you hear him and believe him and he will later on in the film get "one" of those great cinematic moments.

The Moonraker, hooray! If you be a swashbuckling fan then you owe it to yourself to put this on your list of must sees! 7.5/10 'The Moonraker' is a somewhat lacklustre swashbuckler with certain touches of originality. The beginning, based loosely around the final stages of Charles II's famous oak-tree escape after the Battle of Worcester, is frankly tedious, despite all the galloping horses and hack-and-slashery. Neither the King nor those who aid him -- including the "Moonraker" himself -- seem to come to life, and the action, as elsewhere in the film, gives the impression of being done by numbers. The swashbuckling elements of this film are really not its strong point: no matter what it tries, it manages somehow to come across as working down a list of clichés to be ticked.

All this is the stuff of tradition, and there's nothing inherently wrong with that. But it's the business of the film to make it feel joyous -- fresh and new -- and instead it contrives to make it dull.

Events pick up as soon as the character work begins, with a public coach of assorted travellers... and what with the amount of recapitulation around this point, one gets the impression that the film could just as well have been started here, and probably have benefited by it. With hindsight the script's stage-play origins can be perceived, given the narrowly-confined setting from this moment on: almost all the scenes take place within the four walls of the inn. And since it is in the dialogue and the interplay of the characters that almost all of the enjoyment lies, I have a melancholy suspicion that this film's good qualities are due to its original, while its faults lie largely in the added material.

For it is not until his arrival among the others at the inn that I found the Moonraker himself at all interesting. George Baker, handicapped by a dodgy contemporary haircut, really doesn't have the charisma to persuade in the dashing hero role, but conveys a real sense of mischief in his assumed Puritan disguise, where he is far more fun to watch. The innkeeper and his wife, who ultimately play only a small part in the plot, come to life from their initial appearance, and are the first characters whose troubles actually arouse our concern. And Parfitt, whose ultimate fate goes undeservedly all but unnoticed, is a fine comic foil who serves to push the plot along.

But perhaps the best-developed character is that of Anne Wyndham, whose principles drive her first to betray the Moonraker and then her lover, the worthy but dull Cromwellian Colonel. Swashbuckler conventions require that she first scorn the hero and then fall passionately in love and be rescued by him; but here convention is subverted. She faces a very real divided tug of loyalties, between the man she has known, liked and admired since she was a child and the politics they both believe in, and the Cavalier who makes her laugh and dares against the odds, but espouses the cause that killed her father and brothers. And her gallant lie is all too swiftly found out.

It would be easy to have her fall at the Moonraker's feet. But she doesn't, and is all the more interesting for that. The play does not demonise its Puritan characters, with the exception of Major Gregg, who is disavowed by his fellow officers at the beginning and made to demonstrate sufficient obligatory sadism to label him as the villain we are intended to hate. Colonel Beaumont, Anne's intended husband, is portrayed as a competent commander and not unsympathetic man, and we cannot help but feel for their situation when he discovers her shielding the Royalists.

So far, so good -- and the human drama lasts almost to the end. But as soon as it breaks into action again the film reverts to being second-rate. I don't understand why. But the power of the piece doesn't lie in Gregg and his quarry scrambling improbably across the cliff-face stabbing at each other, or in troopers tumbling into the abyss; it lies in Colonel Beaumont's final quiet interview with Anne as his prisoner. I'd be very interested to see the script of the original play, for this film feels as if it is trying to force a character study into a glossy adventure format it was never intended to support.

I'm not sure if the problems are with the budget and its inadequate (and occasionally risible!) special effects, the casting of the title role, or the failed attempts to expand out from what is essentially a restricted stage set. As a swashbuckler, this lacks charisma... as a chamber piece it could have been quite interesting.