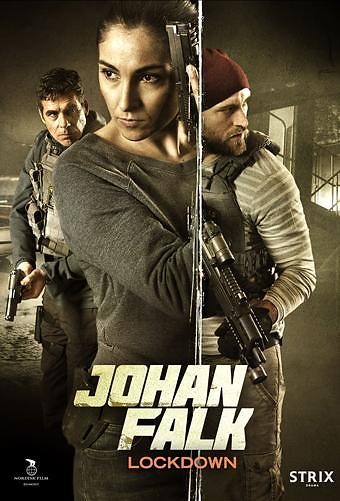 The movie "Lockdown" is a part of the Johan Falk series that takes place under a lockdown of the police station. A snitch is compromised. Drastic and unexpected events take place. Both inside and outside the police station.
In the end credits, this film hails people whose names may not be mentioned, for security reasons. They helped in making this film believable, the credits say. Well. A lot of the security procedures that are displayed in this film are incredulous, and it won't take more than a single glance from somebody, say, a custody officer, to find a slew of factual errors here. So, yes, this film talks the talk, but does it walk the walk?

No, not really. There's no tension here. The most actual, life- affirming thing that happens in this film, is police corruption as a whole. Otherwise, this film is based on non-believable dialogue and vexation; when one of the police in this film gets shot, I'm happy, as that means that person will most probably hush up from it. I'm no psychopath, but the characters are so unbelievable, you care as much of someone dying here, as you do about swallowing a glass of water. Less so, in truth.

So, all in all, what have I taken away from this experience? Nothing, I think. I can't remember much about this film, apart from it feeling amateurish. Guns. Gangs. Violence. Corrupt cops. My psyche has already ousted most of this film, which says one thing: I'm glad to find my mental defenses well prepared against this kind of pap. This is the fourth episode of the third and last season and the characters get increasingly moronic and slow by the minute.

The realism and genuineness of the police work and their emotions is what made the first season so great. It felt real, and the family issues that developed because of their line of work (both Wagner and the GSI force) felt real.

With this last series, and especially this episode, all of that is totally gone. Sophie Nordh, now in command of GSI after Patrik Agrell stepped down, is a poorly written character. All of her decisions feel emotionally driven, stupid and sometimes criminal. This makes me root for the criminals of the film, hoping to see bad things happen to these corrupt officers of GSI.

I'm sitting in my couch twisting and turning just hating this horrible writing. Hating what this series has become, because it used to be a fresh, new take on an old concept. Now it's tired, slow, unrealistic and just plain stupid.

The acting is decent for the most part I suppose. Meliz Karlge is as terrible as ever, and Jakob Eklund, who I normally enjoy watching is still not very good either. I could excuse their acting if it wasn't for the horrible writing. It's stiff, it's unreal, it's no good and most importantly, it's not entertaining.

However Jens Hultén is great and convincing. As are a lot of the other supporting characters. That's what almost makes this worth watching, brining it up to a 3/10.

I believe Johan Falk need Anders Nilsson more involved to be great, and it's a real shame that he isn't. Because this had the potential of being a really good series, and they ruined it.