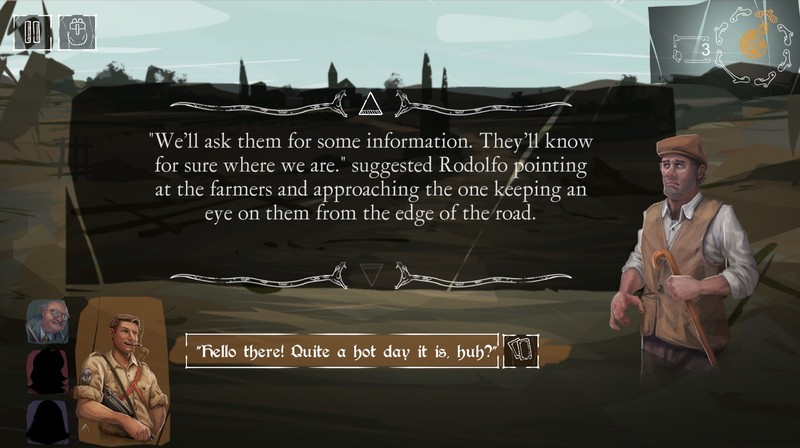 Based on an award-winning Italian pen and paper RPG, Sine Requie: Snake Eyes is a Horror-Thriller roleplaying game with survival elements.
It revolves around the investigations of Inquisitor Rossano Mazzoni and its hunt against a secretive heretic cult in a post-apocalyptic 1954 Tuscany, in which the Dead rose to feed on the living.
Will you annihilate the new heretic cult: the Snake Eyes?

On the 6th of June 1944, in the day that everyone knows as the D-Day, the world felt into the darkness of hell. On Judgement Day the Dead begun their hunt against mankind.

It is the year 1954, the world has become a pile of crumbles, where the few survivors try resist the hunger of the Dead. Few nations, held by cruel dictatorships, are left intact.

The darkest future that mankind could imagine turned into the most monstrous reality. This is the world of Sine Requie.
What was once a country named Italy, today is the Sanctum Imperium, a firm theocracy ruled by Pope Leo XIV.

The Roman Church took absolute power, turning these lands into an anachronistic place, where armoured Templars and horse-mounted Inquisitors parade the streets side-by-side with cars.

Here the population lives left behind, immersed in obscurantism, hidden within the walls of their fortified towns. In the hope of surviving the grasp of the Dead, societies manically persecute the heretics, who are considered the emissaries of the Devil, sent among us to defeat the Justs in the day of the Apocalypse. 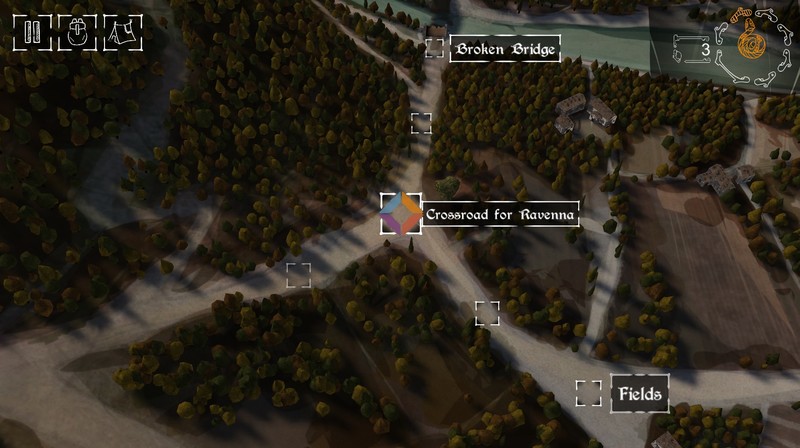 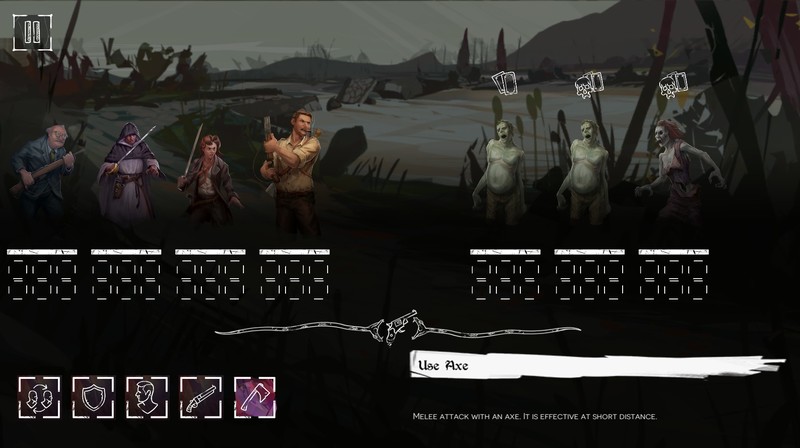 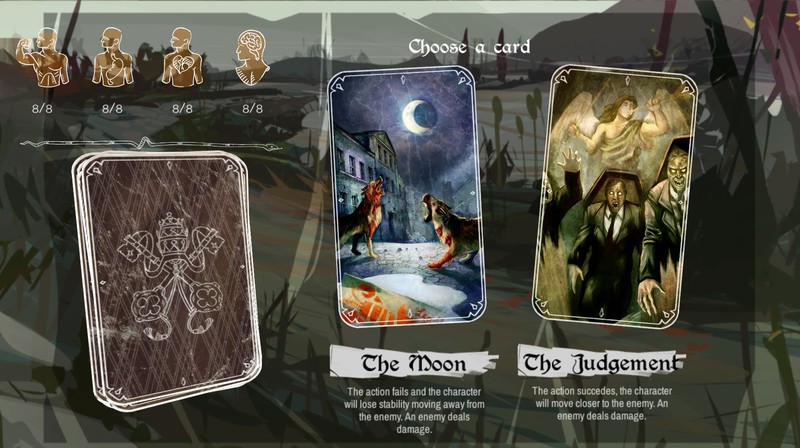 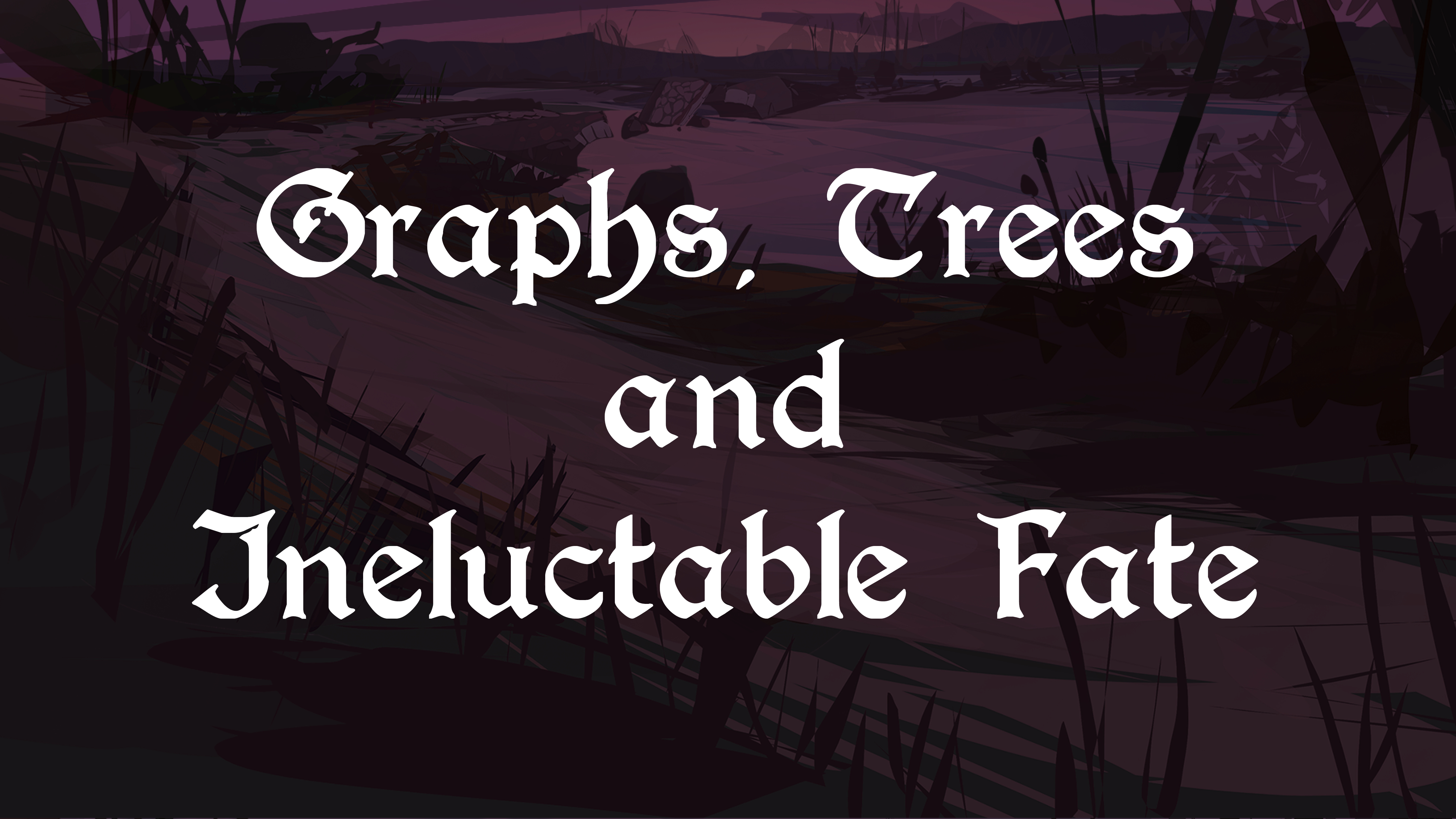 Greetings, Inquisitors! We return with our dev-blog series on managing choices and consequences within Sine Requie: Snake Eyes's story. This time, let's talk about the structure of an interactive story.
Think of choices and consequences within a narration as if they were geometric shapes: consequences are circles (a bit like graph nodes, for those of you familar with math), connected by actions that can be represented through line segments (also called "arcs"). 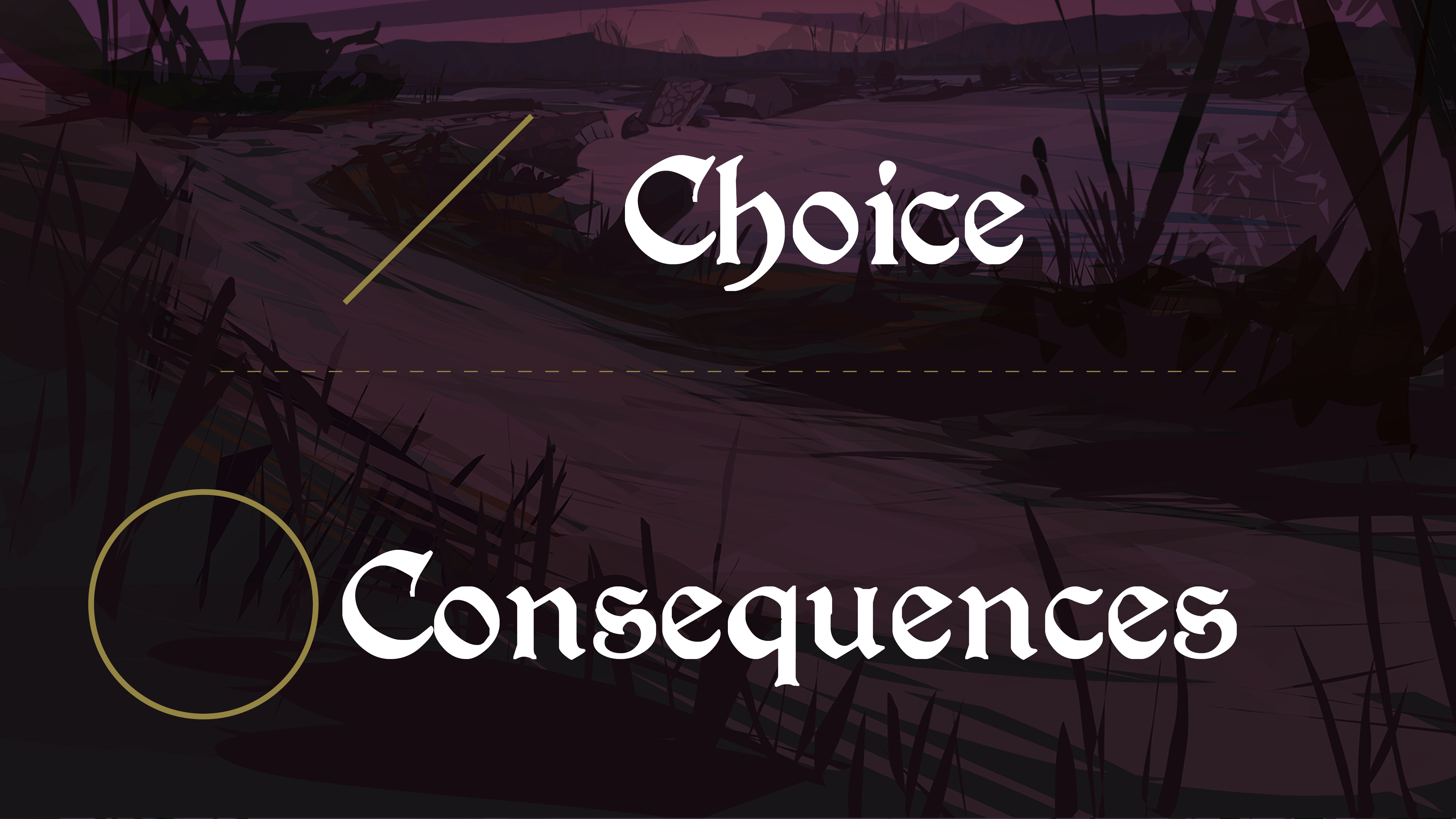 If we extend this structure to an entire zone, many will probably imagine this with a shape not unlike that of a tree: each consequence can lead to countless choices, which in turn bring us to further consequences. 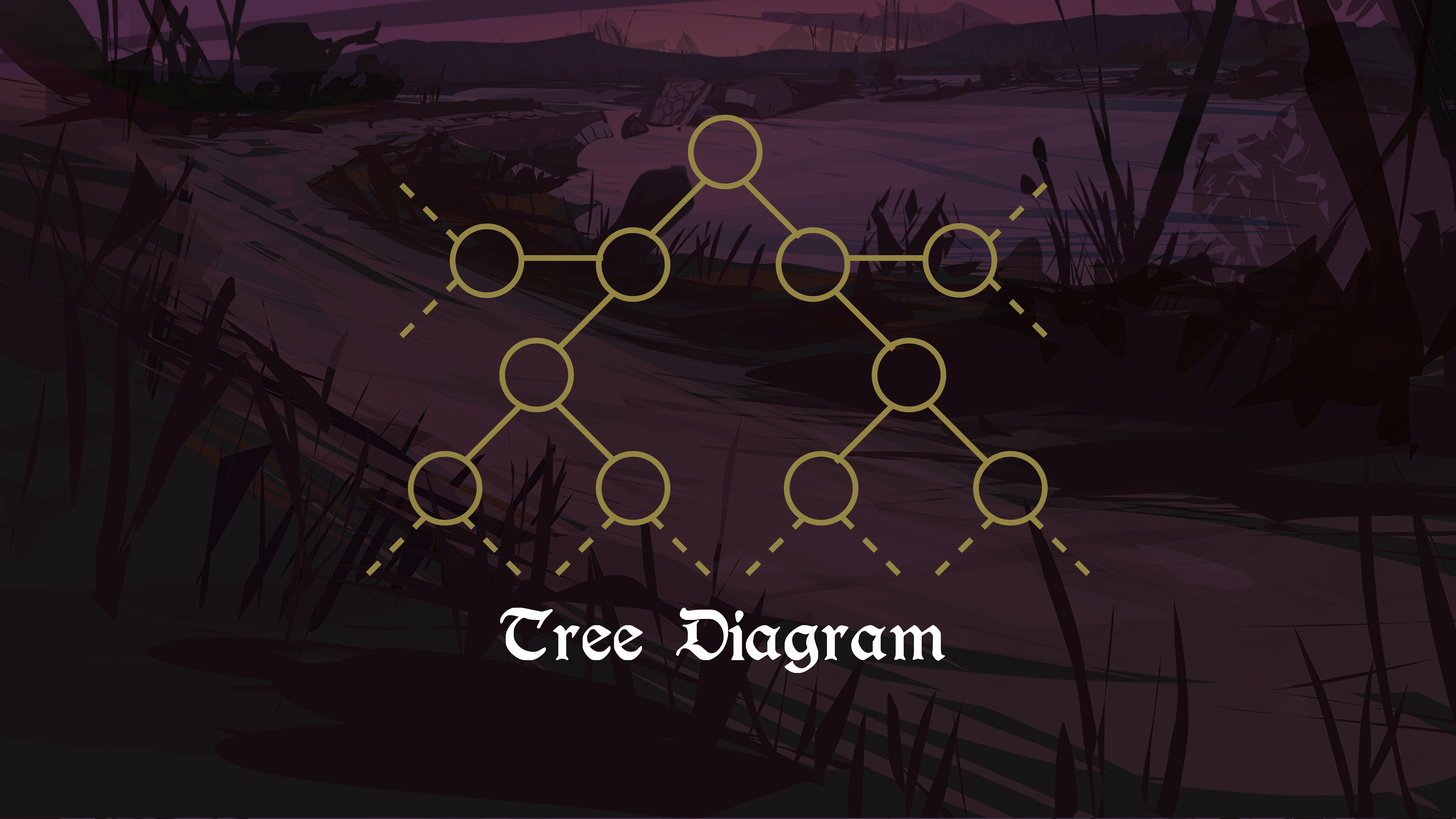 On a purely conceptual level, this structure is not wrong: each new consequence will exponentially increase the total number of consequences, making it impossible to handle the complexity of a story lasting dozens of hours, such as that of a videogame.
In order to reduce the complexity of our story, we make us of "bottlenecks" which will prevent the narration from bloating into an unwieldy mass of consequences. Because of this, the story of an interactive game resembles a state diagram. 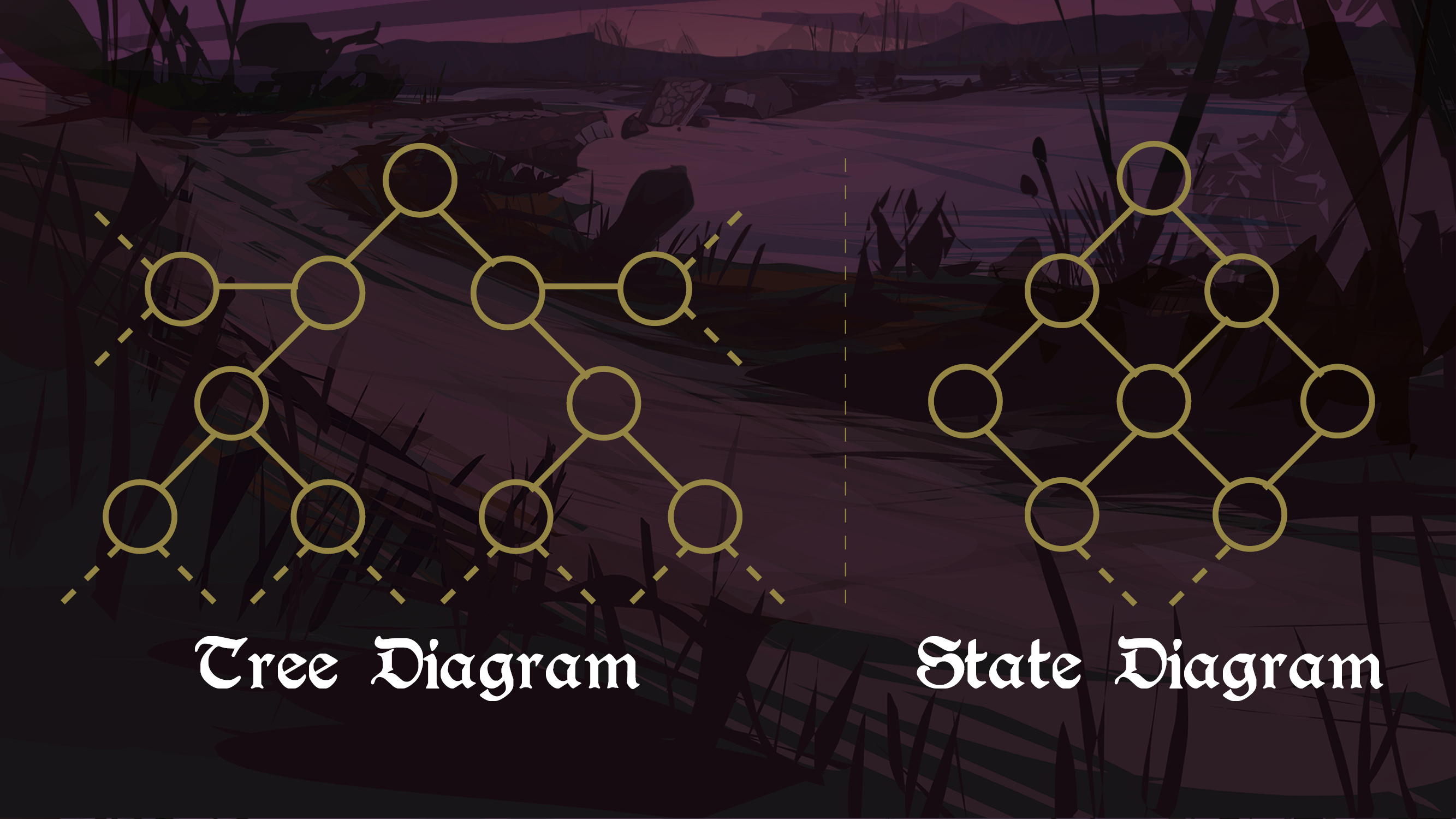 This technical limitation, which applies to every interactive story, forces us to face an ugly truth: our current technological level prevents us from experiencing true freedom of choice within a videogame.
Are we doomed to play through linear, immutable stories?
Yes, BUT some tricks and stratagems allow us to go beyond these limitations. Surely you'll be delighted to know that we will unveil these tricks of the trade in our next dev-blog: "Smoke and Mirrors".. Dev Blog: Combat Reanimation:
As stated in the very previous entry of this blog, The Inquisition is always listening, the major issue of the demo we released is the stillness of the combat. In particular, many have complained about the lack of animations.
But what does animate actually mean?
Coming from the Latin word for soul, anima, to animate is literally bringing something to life.

For the Sine Requie: SnakeEyes art style we decided to look at the Italian 800' and 900' paintings. With the aid of talented illustrators Giuseppe Di Girolamo and Salvo Lo Iacono, we created those beautiful detailed characters and backgrounds. Unfortunately, it is really difficult to move figures made in our art style.

However, animating something has more to do with giving it the appearance of life than to just move it. We, therefore, decided to make some research, looking at visual tricks from various media. In many shots from Japanese animated series, there is no actual character animation: the camera movement and a smart use of transitions gives the sense of dynamicity.

This happens in many games too. For example, a game we really are not inspired by Darkest Dungeon.

So, we changed the camera movements and the images treatment to convey the idea of a gory brawl.

Not so bad uh?

. Dev Diary: Night/day mechanic:
Your mission will be of utmost importance, and you will often face the dangers of Night along the roads of the Sanctum Imperium. "Sine Requie: Snake Eyes" will feature a night/day mechanic which will shape your game and convey a feeling of time passing.

You will choose when to travel and when to stop: at night you might go unseen or boldly march under the light of torches, but this will deplete your supplies - which you will need money to restock.

During the day there will be no light issues, but you might encounter brigands or spies; however, Toll posts will be open for you. Regardless of your strategy, you will need to carefully plan when to move and when to rest, if you want to complete your mission in time!

. Dev Blog: Traits:
Each character in "Sine Requie: Snake Eyes" is defined among other things by a series of Traits that may help or hinder them depending on the context. Traits and personality are determined by the character's role and by a tarot card, called its Dominant Tarot. Each trait is part of a larger category, allowing you to replace a fallen comrade with another character that, while being a different person, possesses similar abilities.

Furthermore, these larger categories are useful when determining how a character's traits can influence a test: having several traits belonging to an applicable category will increase your chances!

. Dev Blog: If you're here, give me a sign:
Greetings Hunters!
The Inquisition reports have been missing for a long time, but fear not:
our faith in the project is still as strong as before!
In this dev-blog, we will discuss the future of Sine Requie: Snake Eyes.

As you may have noticed, our development schedule had slowed down, and we are planning to release SR: SE in 2019 first months.
Truth to be told, this delay is due to the failed Kickstarter: we refused to cut anything from our most loved title. Therefore, we focused on other projects to sustain the studio and maintain the game quality up to our standards.

We are still working on the first video-game adaptation of the brutal Italian tabletop RPG, and, in the next few months, we will resume with our regular updates to show the exciting work done.

The Snake Eyes are not yet closed and the Inquisition has work to do! 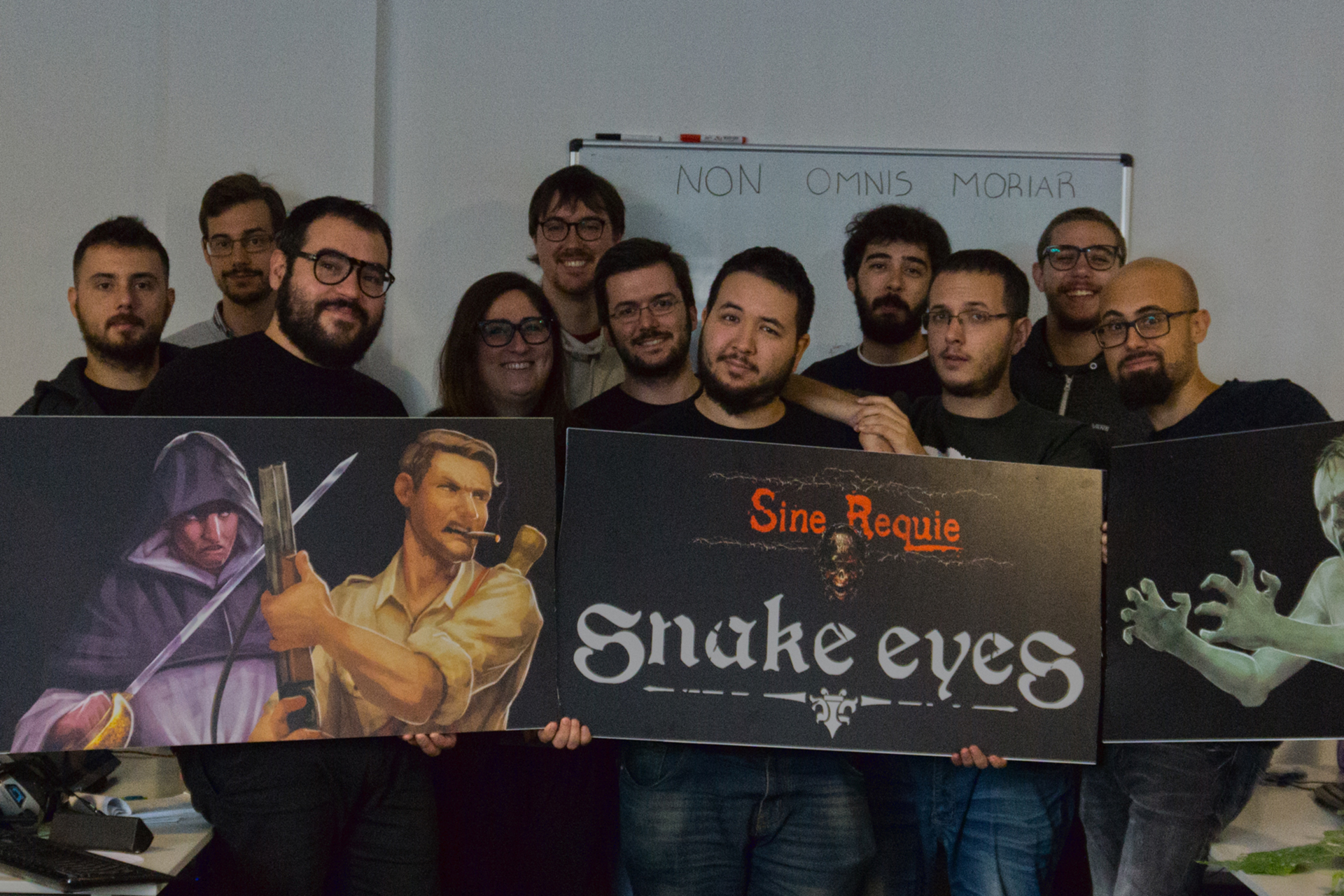 . Dev-Blog: Encounters on your Journey:
We are currently working on adding random encounters! While encounters at key locations will be strictly tied to your choices, some adventures (or misadventures) may take place at non-predetermined moments anywhere on the map.

Be it a providential encounter with an herbalist monk, a sudden storm across the mountains or a brigand ambush, you'll not be left without surprises on your journey. Each game will change depending on your choices and the whims of fate!