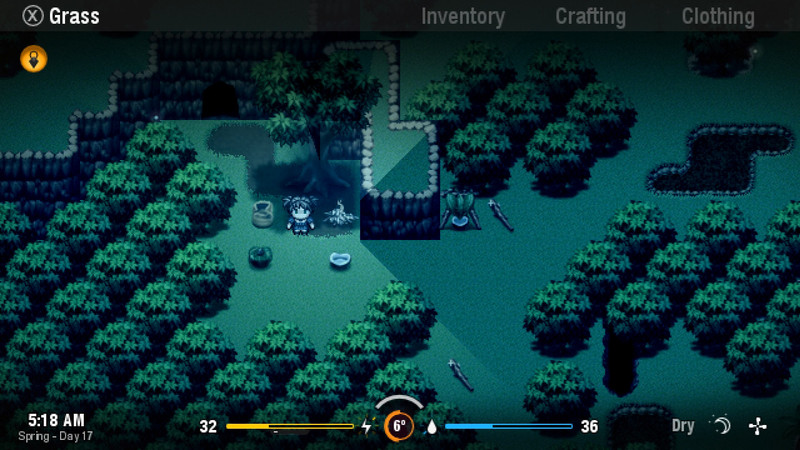 NOTICE: The game may not work on some system configurations. The problem is rare, but we have some reports.
This is an engine issue (RPG Maker and MKXP) and it's out of our reach, since we only made the game, not the engine underneath.
Feel free to purchase the game and if you happen to be one of those cases, go ahead and refund it right away.
We apologize for any inconveniences.


Survival in it's purest form, in a deeply simulated world, modeled after nature itself.

Every step you take and every action you peform costs Energy, you can only replenish by ingesting food. If you run out of Energy, you run out of luck.
Setup traps to catch wild animals, fish fresh fish, or harvest and replant plants.
Cook fat or eat worms if you have to.

Your body spends water to function, and also to sweat, the only mechanism to cool the body off. Water is life. They say it for a reason.
Find fresh water, refill water containers, collect rain water, or produce it from air humidity or salt water.

High temperatures and dry air increase water loss, while low temperatures can cause sickness or even the body to shut down. Adapt or be left behind.
Shelter from cold or intense sun. Wear clothes to protect from rain, sun or to warm up. Relocate if suited by season.

Simulation: A true model of nature


Planet rotation
Earth tilt, spin and rotation simulation defines sun altitude, allowing for a great diversity of survival locations by latitude.
Survive near Equator for a permanent summer, or close to the Pole to survive nights that last an entire season.

Fauna
Fishes and small land animals grow and reproduce. Animals can get pregnant, overpopulate or get extint.
Sustainable survival is key for yourself, the environment, and yourself again.

Body temperature
Temperature asimilation and air dissipation rate based on air humidity, wind speed and temperature.
The body will Shiver or Sweat to regulate it's temperature, and keep the skin moist if hot dry air rips it away.

The game is out there and finished. Yet, it isn't "finished".
Now more than ever we want your feedback on balance, new features and content. We want to make the game of your dreams. 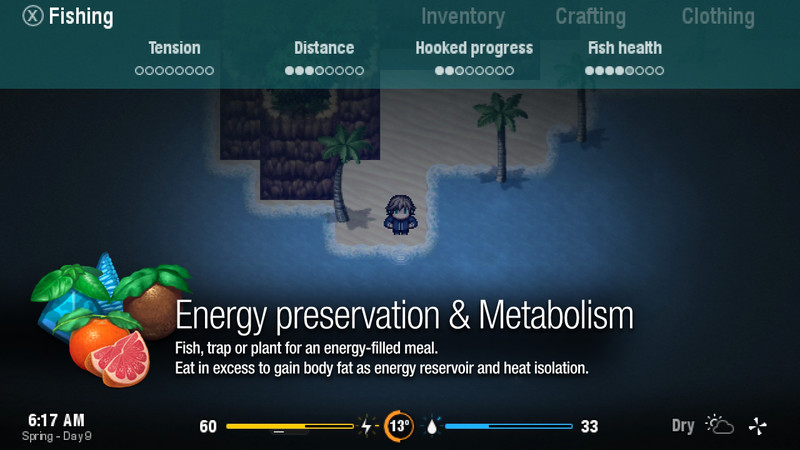 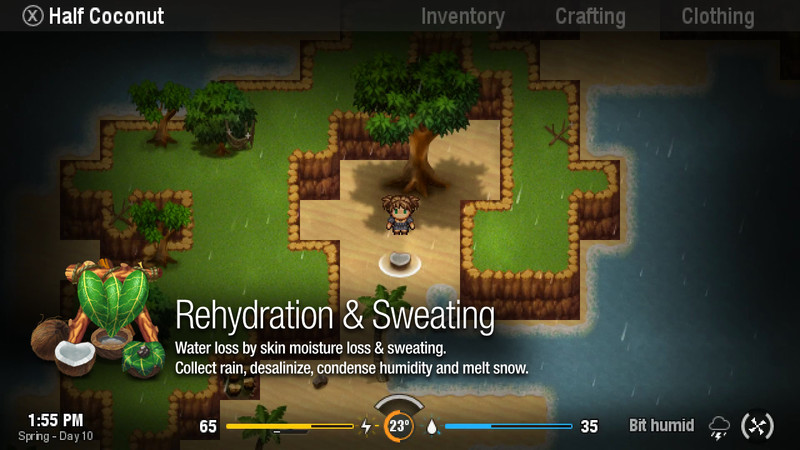 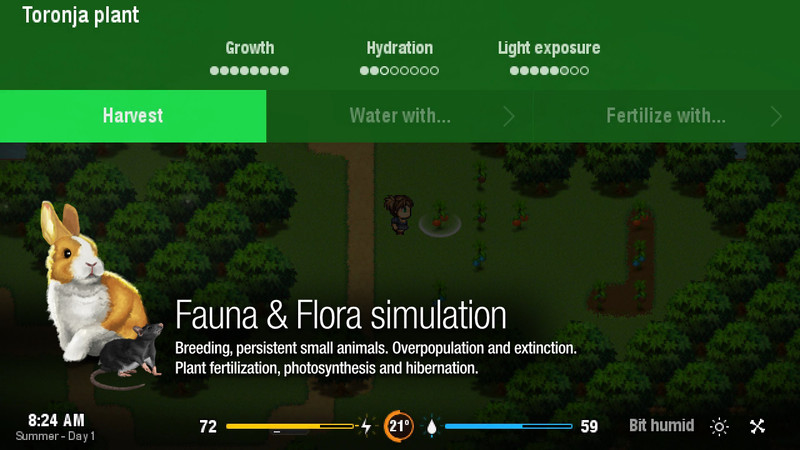 This isn't the finished article by any means, but we can clearly see the base of a fantastic and unforgiving survival game with a heavy emphasis on fighting nature rather than fighting mythical creatures.

I'm a bit of a sucker for survival games, and my Library has a metric tonne of them - but this one intrigued me due to its complex survival systems (you need to sweat if you get hot, or cool off in water, for a start...no other game takes temperature, wind, and sunlight into account quite like this game) and the fact it's managed to implement things I haven't seen before whilst using RPG Maker as its foundations!

I've played the first 'mission' (there are a series, then a sandbox mode) and I died the first three times I tried it, only succeeding once I figured out the basic principles of survival (remembering Bear Grylls and Ray Mears' shows!) - Water, Food, Shelter - in that order. The game is no different. Find water first, then food, then worry about somewhere to sleep.

There's not a lot of handholding at all, which I adore, but it feels natural and logical. A superb start in Early Access, and I can't wait to see how this progresses and develops.

if you feel like and have interest in really good survival games, also like retro graphics, then I can only warmly recommend Unveil. A team of 3 people (a single programmer, two music composers) creates something really great and offers on top of that absolutely great, reliable support. A few days ago I reported a bug which is apparently occurred in only a relatively few people. For days I had several e-mail contact, and together we went through a lot of tests to fix it daily with the developer. There's a lot of commitment behind what nowadays is wished and wanted of many indie developers and therefore you should support this with full force! :)

Just visit the shop page and make sure to check it out. DO u know other games on Steam which were rated 100% (!) positive?

So come on, support the developers and spread the word. Such games need to be more popular and the developers needs to be rewarded for their very good work :)

Helf mit, damit solche Spiele bekannt werden und die Entwickler f\u00fcr ihre sehr gute Arbeit belohnt werden :). Unveil's simulation of weather effects, temperature, hydration, energy, and all the other many aspects not mentioned combine to create a very unique and intricate survival game. This game is difficult, realistic, and enjoyable and doesn't need to throw monsters in your face to make it so. Highly recommended for realistic survival enthusiasts..
Unveil delivers what it promises - a survival game where the main opponent is nature itself. It's a beautiful little gam: challenging, fun and peaceful, with enough content to do a decent job of holding off the inevitable triviality that survival games all must eventually fall prey to.
The audio is polished, and the overall look of the game is really impressive compared to other RPG Maker games I've seen.

The developer posts dev logs on YouTube very frequently and his enthusiasm for Unveil is contagious. You can tell not just from the weekly bugfixes and content patches, but from the little details just how much love and thought go into this game from its creator.

On the question of whether I can recommend it, I'd say 'yes', to those who enjoy early access games in general. At the moment, there's probably between 5 and 10 hours of content to Unveil, which to me justifies its asking price. However, supporting such an amazing developer is its own reward. Not to mention that going by the rate of updates since launch, the amount of content in Unveil is looking to increase drastically in the near future.. I have watched some Youtube videos about this and being a fan of minimalistic styled, realistic survival games I decided to give it a go.

Cons<\/b>; while the premise of the game is attractive, the content itself has some issues.