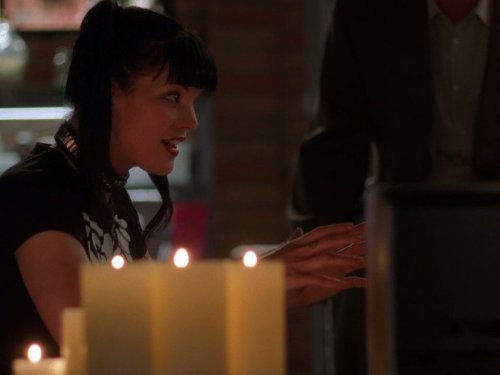 A man dies at a retrofitting site at a Navy facility; Gibbs and company investigate. Palmer sees a fleeing person, who takes a shot at him; a second body turns up.
Workers find a body at a retrofitting site at a Navy facility; Gibbs and company investigate. Palmer finds evidence, which promptly disappears, and he briefly sees a fleeing person, who takes a shot at him. Vance, the assistant director, continues to use management by intimidation, which does not work on Gibbs. Ducky says that the victim died not from the blow to his head but rather from the injuries resulting from his fall from the third story; Ducky shows Gibbs some curious evidence. The victim's home disappears, and Abby uses hypnosis on Palmer. The team find a second body inside a concrete column, and they figure out everything; Palmer sees the bad guy again and stops him.
Whether you like Jimmy Palmer or not this episode really shows us Brian Dietzen is a great actor. Dietzen really brings Jimmy Palmer, the awkward assistant medical examiner to life. His character reminds me of the awkward CIA operative Mike in American Ultra. His frustration is understandable in this episode. Jimmy has to identify a suspect that he didn't see correctly. The case is pretty good but since the episode is centered around Palmer, you really miss that McGee, Ziva, Tony dialogue even though there is a funny scene at the beginning. Overall this isn't a ground breaking episode but it was worth reviewing because of two scenes in particular: When Gibbs, the experienced former marine who has lost his wife and child, been exploded, worked and solved many many cases and killed tons of terrorists in gun fights gives advice to Jimmy, the inexperienced awkward medical examiner who's shaken up because a terrorist took a shot at him. It's quite a scene. The ending, I won't say it for spoiler's sake but it's pretty hilarious.
First of this is a great episode. I saw a few clips of while flipping channels before I started seriously watching NCIS and I still remembered the episode clips when I re-watched it today, even those I first saw that several months ago. I started watching NCIS because a coworker mentioned how much she liked the show and that she thought I would like Abby, but one of the main reasons I started watching was because of Michael Weatherly who plays Tony. I have seen him in so few things, but my favorite was his role in Dark Angel. Dark Angel is one of and perhaps my favorite show of all time. So I can't help but point out when Tony says or does something that reminds of things Logan of Dark Angel said or did. There was another time this happened in the episode "Hiatus (Part 1)" when he made a comment about the likeliness of him hooking up with Jessica Alba comparing it to finding something on the case. And as I already knew and the trivia section of that episode, Jessica Alba, his costar on Dark Angel, dated and were engaged for a time. My point about the quote (while it took me long to get to it), is that Tony pokes fun at McGee for being afraid of heights, but in Dark Angel Logan was deathly afraid of heights. I just thought it interesting but maybe it isn't that interesting.