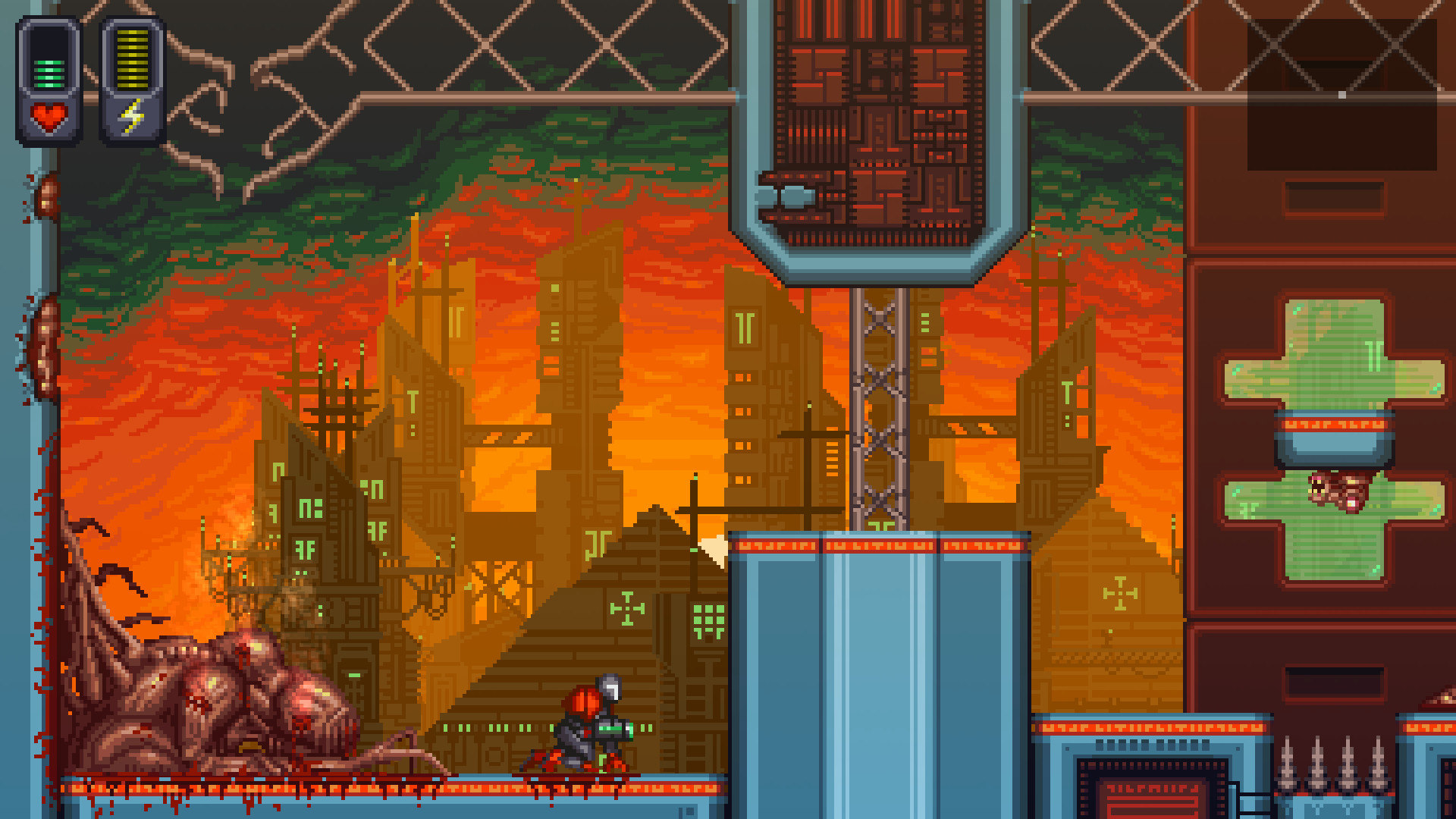 A Robot Named Fight is a Metroidvania roguelike focused on exploration and item collection. Take on the role of a lone robot tasked with stopping the entity known as the Megabeast. Explore procedurally-generated labyrinths, uncover randomized power-ups and artifacts, find secrets, and blast meaty creatures in this deliciously gory Metroidvania.

Millennia of peace have passed since the mechanical gods ascended and left the lower order robots to cultivate the world. Unfortunately for those left behind, something forgotten and terrible stirs amidst the stars: the Megabeast, a pulsating moon-sized orb of flesh, eyes, mouths and reproductive organs – unleashing its children onto the world like an unstoppable plague. 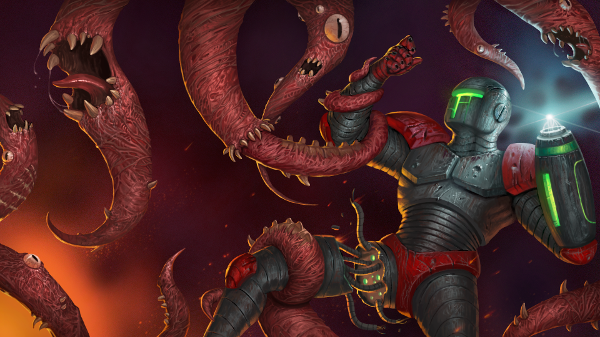 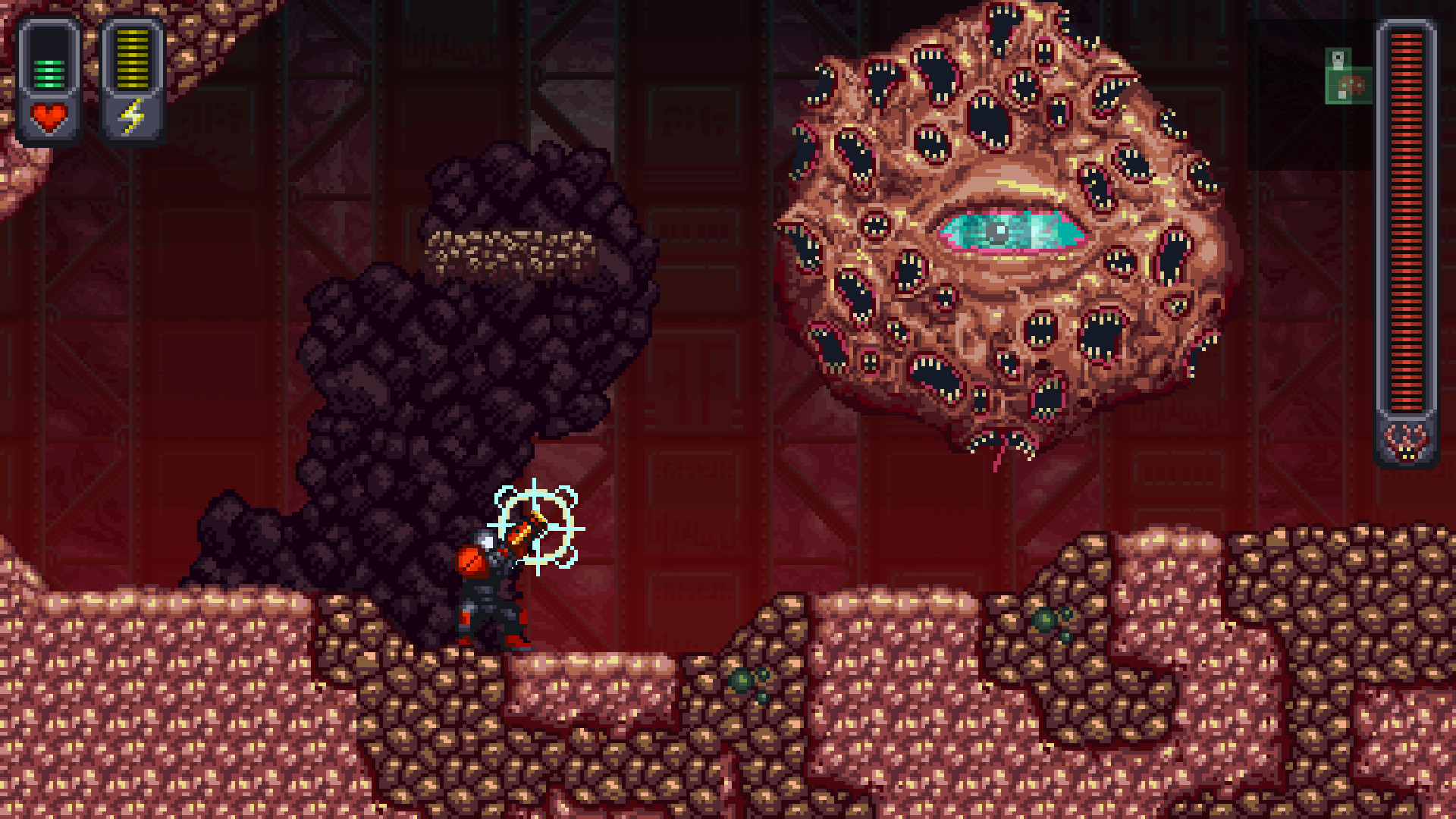 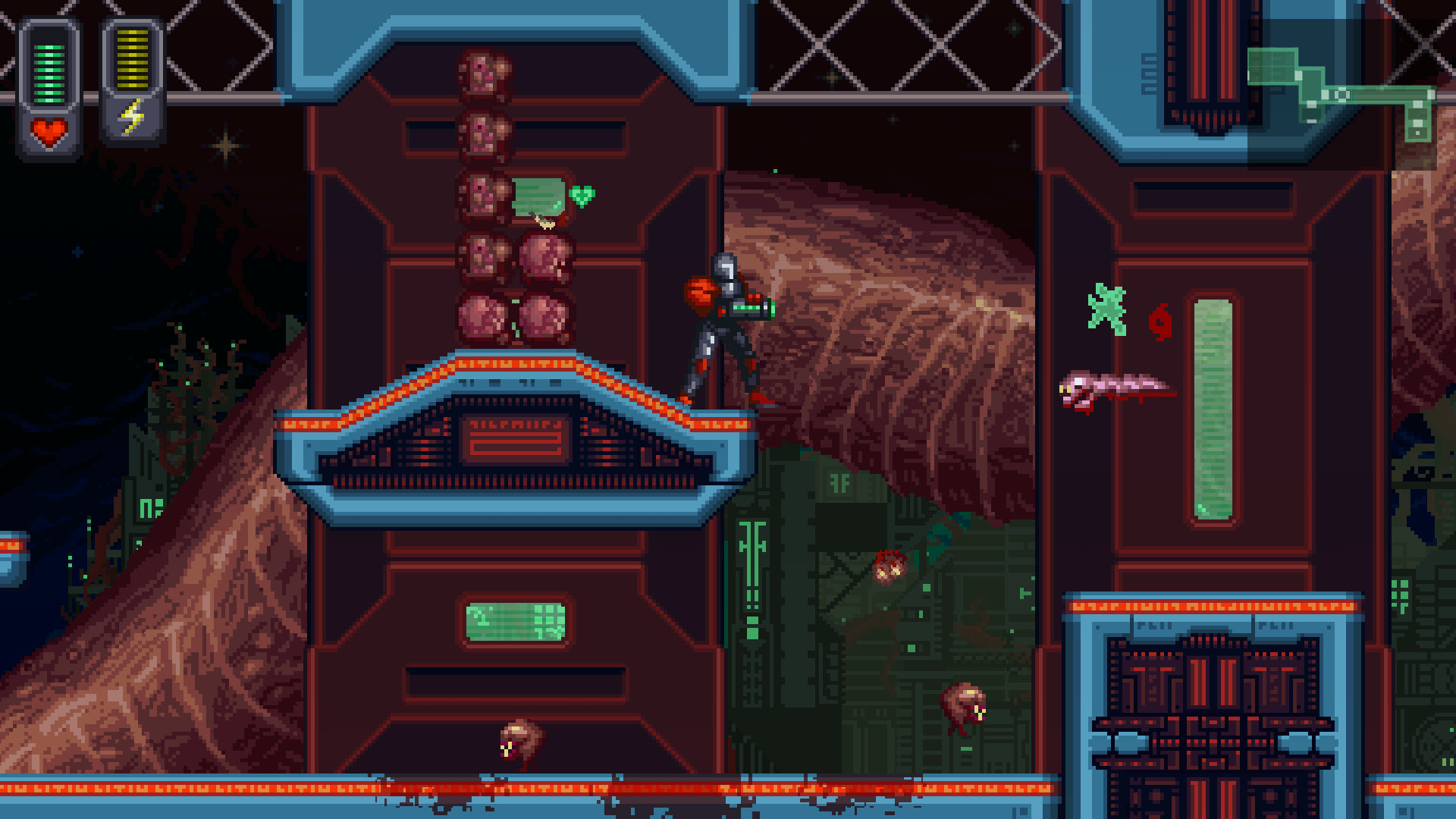 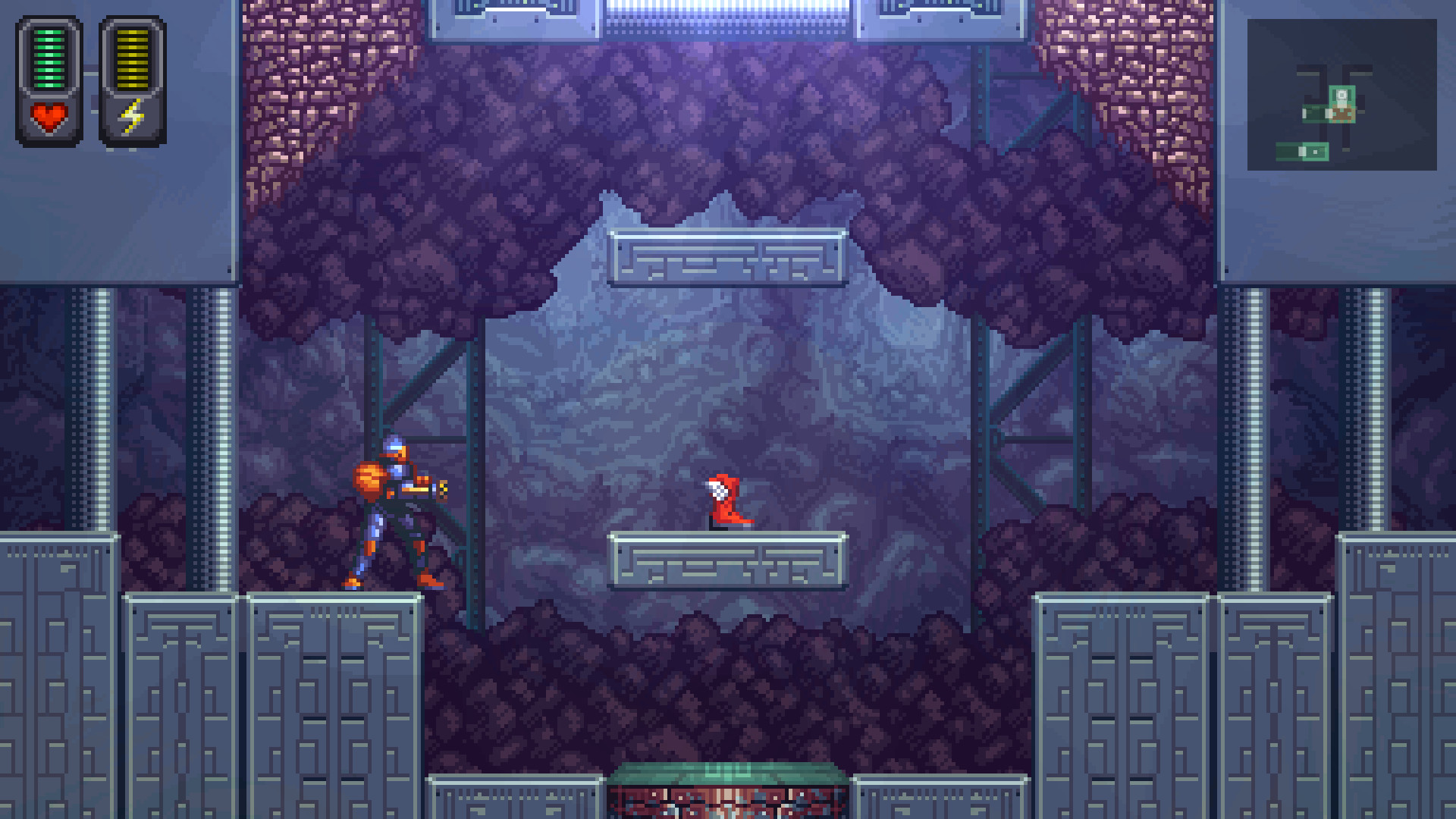 A procedural metroidvania done right, A Robot Named Fight has been my addiction. I've been making sure to beat it once or twice a day. I love this game and highly recommend it.

While other games attempting to mimic this type of exploration have fallen into a trap of showing their entire hand in one long go, A Robot Named Fight remains extremely replayable. Sessions last roughly 2 hours for thorough players not speed-running to one of the endings. There's a save if that's still too long. Meanwhile, key items have variants so the basic tools may change each run. For instance, a mobility upgrade could involve either a high jump, a double jump, a jet pack, or maybe even an adorable trampoline dog that fights nearby enemies and changes costumes with you but also makes you struggle to avoid stepping on it unintentionally and launching into spikes.

A Robot Named Fight is also a rogue-like rather than an RPG hiding inside a metagame. Unlocks might gift a random item at the start of a run, but play involves permadeath with no permanent cross-session upgrade nonsense. This game can be beaten on the first try rather than forcing a grind in the pursuit of later fun.

As of this review, the Big Wet area\/bosses could probably use some balance tweaks and there's some quality of life issues like weapon selection that could stand to be ironed out. However, these are all relatively minor and updates are still coming. The game was a bargain even before I ventured into the beta version and I'm confident in it's value now that it's released.. To start, I suck at this game. It controls exactly like super metroid and if you know what that controlled like it was a little awkward with how you shoot and jump. I can last about 3-4 bosses in a run now.
The game feels like super metroid compressed into a roguelike. I don't know how many bosses there are but each time I play, I encounter new bosses and I've never seen and have new power ups that I've unlocked and see new environments. Some rooms are the same but for the most part, it succeeds as a roguelike metroid which is very exciting to me. It is an awesome game.

Other observations, positive and negative:
+In addition to the alternate key items, there are also a wide variety of optional upgrades that show up and change combat in fun and varied ways, reminiscent of The Binding of Isaac.
+The tiles used to make the map are well-done and varied, and are designed such that even encountering the same tile twice might still be a unique experience due to the type of enemies involved and the positions of the doors and hidden powerups.
+The controls and movement are satisfactory, and I never felt myself blaming any platforming failures on them.
+The combat feels fun, and the enemies are varied and interesting rather than recolored versions of previous ones.
+There's a good sense of power escalation as you start collecting powerups for movement and combat.
+The game's visual and musical style are quite good.

-The map generation has too much backtracking for my liking. I'm sure it could be made to minimize that more. Most hand-made metroidvania maps tend to take the player through loops back to the main areas rather than having them run down a corridor and back.
-Most of the alternate weapons feel weak or hard to use, and trying to switch to the right one in combat by cycling through the list isn't great. The main gun is almost always the best weapon, especially since it upgrades.
-For some reason, dying and starting over feels worse in this game than it does in a lot of roguelikes. I think the game would be served well by an "easy mode" that makes save points last forever rather than burning out after one use.. Graphics are really tight, the music is catchy, and the gameplay is overall a lot of fun. I like that despite there being set progression of zones, the map generation algorithm shuffles the items needed for progression and hazards (ie "hot zones") to make replaying the game more interesting.

The biggest complaints I have are that the controls feel a little off, some of the subweapons feel useless, and it's somewhat annoying trying to find secret blocks in rooms that are marked with an unfound item. I hope to see those points get addressed, but the game is a lot of fun regardless.. If you have a severe hatred of animated meatballs, and want to take them out Super Metroid style. This is your kinda game. Just don't step on the spikes okay?. Super Metroid, but as a procedurally generated rogue-like with tons of new elements and an amazing setting. Nearly a dream come true. Deserves a LOT more attention then it got!